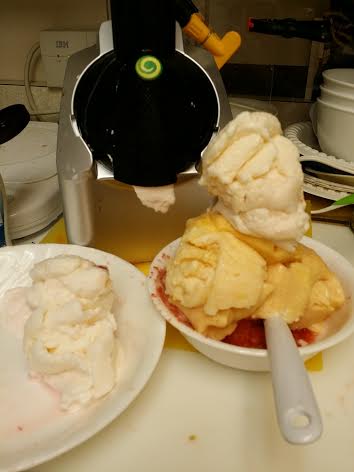 When I saw an appliance called Yonana at a thrift shop several years ago, I was intrigued and thought this would be an opportunity to try the gadget out without shelling out $69 for something that a) somebody got rid of, and b) might end up just gathering dust on a shelf and eventually get donated back again. I have to be honest here and admit that I don't like bananas. I especially don't like overripe ones. Notwithstanding, it is amazing how good they taste in the soft serve frozen dessert that the Yonana machine makes.

There are several problems with this appliance, however. First, it is quite noisy. Second, despite being easy to assemble and disassemble when it is dry and at room temperature, after use I have a hard time getting it unlocked. The plastic must contract when it gets cold. Third, the hole that the frozen dessert is dispensed from is too big. I cannot fill my popsicle or push-up molds directly from it. Fourth, entirely too much of the processed fruit is wasted inside because it collects all the way around the screw on cover as well as between the blades. By the time I get the thing apart, all that is melted and runs all over the table top, even when I operate it inside a tray.

Enter the Dessert Bullet. Admittedly, it does not make frozen fruit as creamy and smooth as does the Yonana. But it is quiet, the dispenser fills my popsicle molds clean and fast so that I can pop them into the freezer before they melt. It is easy to take apart and traps very little food inside. A third product called Swirlio appears to be similar, but I have not yet had an opportunity to try it. 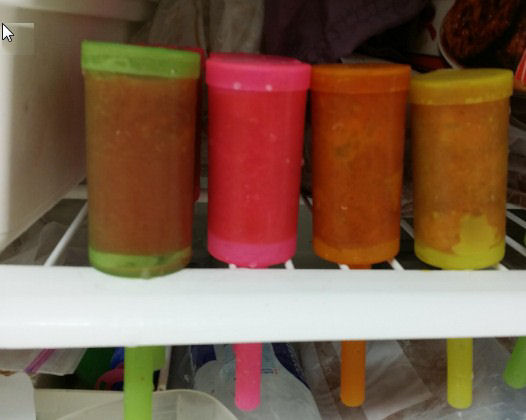 In theory you can simply feed the different kinds of fruit through the chute and yes it might come out looking beautiful just like in the ad photos. But in practice, I prefer to mix and pre-freeze the fruit and flavorings so they are consistent in sweetness, texture, and flavor. That is because I like vanilla, milk yogurt, coconut cream, and spices in my frozen treats. It would work well to able to simply pour the blended mix into ice cube trays, but in practice, I have found that they are much too hard to clean, especially when using milk products. So I use Cool Cone Push-up Molds instead. This solves the problem of getting different kinds of fruit to thaw just enough to come out of the machine in the right consistency.

Loading the Dessert Bullet with my already mixed and already frozen fruit with additives puts a portion controlled attractive swirl of thoroughly mixed soft serve treat in a cup. This can be placed in the freezer before a meal so it does not thaw while I clean the machine, an easy rinse if it is done right away. This way it is possible to make watermelon ice, which would come out of the machine in a a powder like form if processed by itself. I puree mine with a little coconut cream and it comes out delicious.

The removable parts of these appliances are dishwasher safe. Yet another reason that I prefer the Dessert Bullet is that the parts take up less room in the dishwasher, although it is also true that because it comes apart easier and faster, there is less sticking, so the parts really can be simply sprayed with soap and rinsed with running water in the sink.

Image Credit » I took this photo with my Samsung Note3 Smart Phone.

Very useful to see what appliances work. My daughter freezes bananas if they are not going to be used before they get overripe and uses them in smoothies. Being able to freeze treats sounds even better.

I can definitely understand your concern that the appliances will gather dust, but it sounds like you're making good use of at least the Magic Bullet one.

Just show me where the Ben & Jerry's is in the store.

What a thorough review! It lets us know just what to expect from each of the appliances you have actually used. Kosta likes me to just put the overripe bananas in the fridge and he considers them as ice cream treats as is when he pulls them out and unpeels them.

Yes &Ruby2881 I love the Dessert Bullet more every day and will probably donate the Yonana back.

I have tried some of the designer ice creams Scorpie but I have not yet tried Ben & Jerry's. What is it that you like best about theirs?

I have done that before, too, except I peeled them first BarbRad and the fruit I love best to pull right out of the freezer and eat whole is grapes. They taste sweeter to me when they are frozen. PS: A little too thorough. I think I mistook the 500 character limit for 500 words, rflol. I probably should not post so late at night.

I love the simplicity of the flavors like Cherry Garcia. Cherry flavored ice cream with a ton of cherry and chocolate bits. The ice cream is rich and heavy. It is not pretending to be salad.

That's a minimum, not a maximum. More is better.

So, did you donate the yonanas back to the thrift shop? I use mine quite a bit. I make it into a bowl, immediately take the machine apart and scape all the stuff out of the inside. I really like it, as it gets me to eat more fruit with nothing else added to it.

I don't think I would want my ice cream to pretend it is a salad. No way! Thick and creamy, that is what I want.

Not yet paigea as I should ask my brother if he would like to have it first. If the stuff gets scraped out fast enough it stays nice in the freezer for a while. Kudos to you for enjoying the fruit without additives.