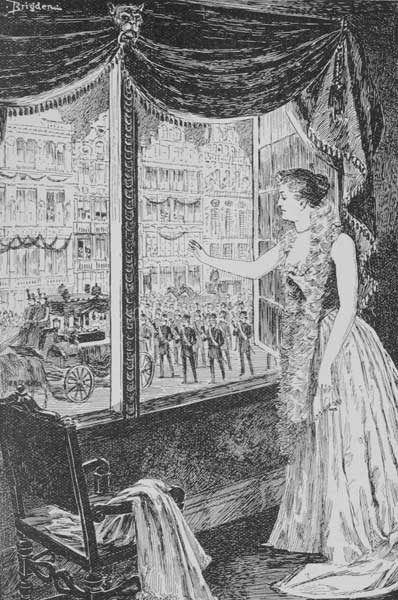 Bidwell travels by boat to Europe and then by train to Europe, carrying the stolen bonds. He meets a detective on the train, who is following a woman who married an elderly man for his money. The husband caught his wife with a new lover and had a heart attack and died. He had left her all his money and property and his family wants to prove she was a bigamist and is therefore not entitled to profit from his will.

The detective pointed out the countess to Bidwell and later writes to him to let him know the outcome of his search. The countess turns out to have two living husbands and the family buy her off from what her wealthy "husband" left her. She was happy as she had money and the family were happy to have no scandal. Bidwell makes several journeys to Europe.

Bidwell describes the casino in Wiesbaden, Germany and sees there the countess that the detective had been following some time before. She is now living on gifts from from lucky gamblers in the casino. She herself is an inveterate gambler. She had gambled away several fortunes from men infatuated with her. One had shot himself on becoming bankrupt. She had waved to his funeral cortege from her balcony before escaping from creditors by climbing over the back wall of the hotel to meet another lover only ten minutes after the funeral cortege had passed by.

Bidwell gives her some money for gambling but she loses it all. He meets her again a few times and pays some of her bills for her. He finds that she speaks many languages.

Later he finds her in great poverty and depressed with no money, several bills and no one now willing to help her out.

The Story in the Book

The Countess sat looking gloomily out of the window
across the Rhine, while I watched her face until an infinite pity for
the shipwrecked soul filled my mind. Dismissing the waiter I went to the
window, and standing by her chair I said: "Don't worry any more,
Countess; I will pay your bill." At the same time drawing from an inner
pocket a book crammed with notes, I placed seven 100-thaler notes in her
lap, saying: "This one is for your board bill, and the other six are for
your pocket money." I need not attempt to picture her amazement and
delight. Certainly she appeared very grateful. We had a long
conversation and I was talking to her like a brother. Perhaps had she
still been beautiful and young my manner and language might have been
less brotherly. I told her she had danced and sung, but at last the time
had come for toil, and suggested she should go to Brussels, which is
ever thronged with tourists, where her knowledge of languages and her
savoir faire could be made available in one of the many shops where
gimcracks are sold to travelers. I advised her to offer a small premium
for a position. This she said she would do.

For those who may care to know more of her, I
will say that, following my advice, she went to Brussels and obtained a
position in a Tourist Exchange and within a year married the proprietor,
who was a Councilman and a man of considerable local importance. She
made him a good wife and became a true mother to his five daughters.
When he died he made her guardian to both of them and his wealth. She
became very religious, and to the last was a devout member of the Roman
Church. She died in 1886, thirteen years after the episode at Rieberich.
Her ashes rest in the little graveyard of the Convent des Soeurs de Ste.
Agnes, on the Charleroi road, two miles from the city, and on her
monument is engraved:

TO ELIZABETH, The Beloved Wife, Pious and True. She Served God and
Has Gone to Live with the Angels

The picture is from the book and is of the countess waving goodbye to her lover who shot himself.

THE FIRST TREE PLANTED BY AN ORNAMENTAL TREE SOCIETY.

Definitely people I would want to carefully avoid.

Yes, most certainly. Not my lifestyle at all and never was!

It seems so odd sometimes that anyone would seek such a style of life. But they do.

Yes, in those days, some people may have felt they had no choice but then, she was a gambler!