The Story of Figaro Newton 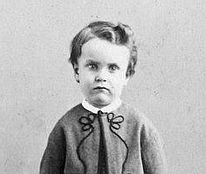 The story I am about to tell, its names, characters, and incidents, are
purely the fantasy of a diseased mind.

With that understood, let us begin...

Once, a long, long time ago, there was a young man named Figaro. There was nothing special about Figaro. In fact, he was a very ordinary sort of fellow. Like all young men, Figaro wanted to make his mark on the world.

So, he decided to eventually open a small shop selling specialty sandwiches. But first, he realized he needed training. So he enrolled in a small class devoted to the art of sandwich-making.

The instructor was of modest means, with limited supplies. Some of the students were of noble parentage, so in his first effort, Figaro was given the leftovers - some butter, a little sliced bread, and a handful of nuts.

Not one to complain, Figaro borrowed a large mortar and pestle from the chemist's shop next door. He then pulverized the shelled nuts to the tiniest of fragments. Then he added the butter and pulverized the combination some more.

Finally, he took the paste and spread it between two of the slices of bread. It was an instant hit among his instructor and students. Figaro had invented what we, today, would call the first peanut butter sandwich.

The name Figaro Newton became a celebrated one!

If you enjoyed this story, I should like very much to tell you how Figaro Newton developed the cookie.

Off with HIS Head - King Henry VIII