Goodbye Mr Biggs, You Will Be Missed 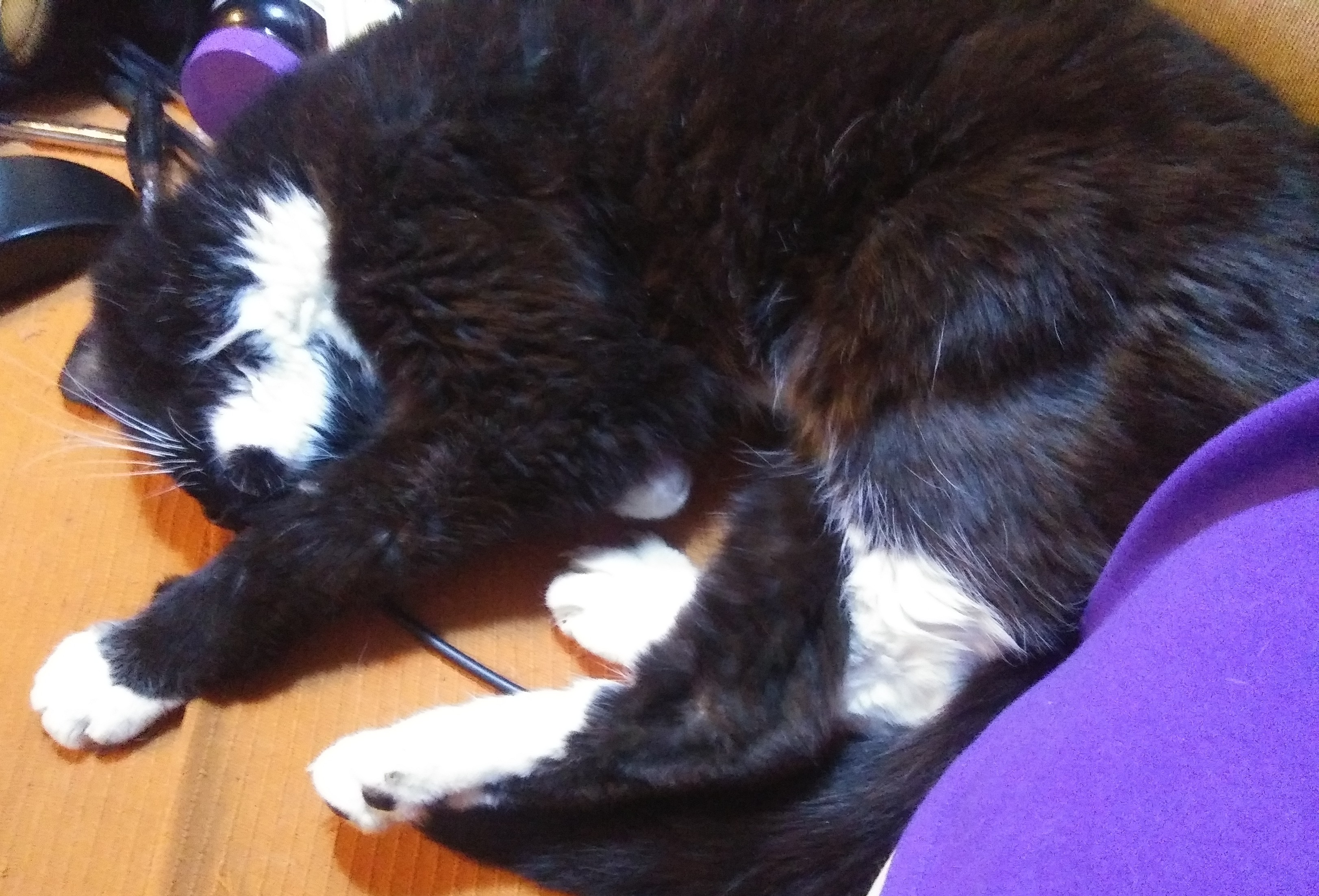 I just said goodbye to my cat for the final time. Actually, he wasn't my cat. When I moved up here over 5 years ago, my friend had a cat. As I understand it, the cat adopted my friend abput 14 years ago. This is the way of some cats. If they don't like where they are living, they'll seek another place to live. Years ago, I had a cat who adopted me. She was a good girl too, and I still miss her.

His name was Skits, but my friend called him Mr Biggs. I was warned by my friend's girlfriend that Mr Biggs could be a little bit temperamental. You could be petting him and think it was good, Then, he'd turn around and bite you or claw you. I know cats, and I can generally spot the signs when they are about ready to bite you or claw you. I never had a problem with Mr Biggs, because I could see when he might be a little overstimulated.

I was brought up here to write and do publicity for my boss. I've always been a cat person, so Mr Biggs and I became friends. If he was hungry, I'd be feed him. Usually, he liked to be petted a little bit first, which I didn't mind. I also discovered that he liked the Temptations treats, chicken flavored. I'd go down to The Dollar Tree when I'd pick up a few things for myself and get him a few bags of these treats.

It became a regular ritual for me to give him treats or make sure his food dish was full, change his water and that sort of thing. Sometimes, he'd just be out there meowing for attention, and I'd give it to him. This is the way it was between us since pretty much when I got here. I didn't mind. Actually, I've grown to love this cat as if he was my own.

It happens with all of our furry friends. They get old. When my dog Bear passed away about 15 years ago or so, I vowed I wasn't going to get another pet. They give us so much love, but I can't deal with the end of their life. I've had too much loss in my life, and it never gets any easier. I don't like having to say goodbye to people I love, and that includes my furry friends.

Mr Biggs had his little food spot, which he jumped up to. I could tell over the last year that it was becoming more of a problem for him, so he would use the chairs to get up to his food dish. I encouraged him to do that. When I got my trailer and moved out of the bedroom, he soon figured out that he could come in here if he made enough noise outside.

I didn't mind having him in here, although he could be distracting when it came to writing. The way I have my trailer laid out, I sit on the couch and have my laptops connected to a TV set. I don't have a desk, but this works okay. Mr Biggs would sit next to me, and he usually wanted attention.

The crazy cat would sometimes wait in the rain to come in here, so I'd be petting him and drying him off. When he got comfortable, he would just fall asleep next to me. That's the way it would be. I didn't always let him in when he wanted, and I regret that now.

The problem was Mr Biggs wasn't trained to be an indoor cat. That means he would do his kitty business in the trailer. That's why my friend would only let him in the house for a little while and then put him back outside. He was always keeping an eye on the cat when he let him inside the house, but I gave him the trust that he wouldn't be a bad kitty in this trailer.

I could tell he wanted to go down by my bathroom door to do his business, rather than going outside, even when I had opened the door for him. Therefore, I'd have to put him outside. Only a few nights did I let him sleep in here, and I now think that he probably did his business in here more than I realized.

The last night I let him sleep in here, he actually pissed on my bed. I had tried to let him out earlier, but he didn't want to go out. He stayed sleeping on the couch. He eventually jumped on my bed and later I realized what he had done. It wasn't his fault. He was never trained to be an indoor cat, so I wasn't angry at him, just upset that it happened.

I didn't let him in for a couple of weeks before letting him in again. I went into the kitchen in the main house for just a few minutes, and he was sleeping when I left. I came back to find that he had just finished doing his business next to my bathroom door, and that's the last time I let him in here.

He wanted in after that, but I wouldn't let him in. Believe me, he could be loud, meowing outside my door. I feel bad now. I should have let him in, even just for a couple of hours next to me on the couch. I could tell his health was deteriorating, but I didn't think it was nearing the end. Then again, maybe I didn't want to think that.

My friend knocked on my door just a little while ago to tell me that he was taking Mr Biggs to the vet to put him to sleep. I went to the crate to say my last goodbyes and open the door to let him out. I gave him some water, but he didn't want any treats.

He looked so weak. I knew it was time. I petted him and told him what a good boy he was. I told him I loved him. It's something special how these furry friends of ours take a little piece of our heart. Some people say they are just pets, just animals. But anybody who's ever opened their heart to a cat or a dog or any other animal knows better.

They are people like us, only smaller and furry. They give love and ask for so little. Cats aren't as clingy as dogs, but they have their way of getting under our skin.

Mr Biggs was a good boy. When I came up here, I had no friends. I still have no social life and haven't really taken up roots. I guess my heart is still in California, but I haven't found a way back. Mr Biggs was special, because he was always there.

He didn't ask much of me. Just a few pets and food in his bowl. I was happy to give it to him. He gave me so much more than I could write here. I guess I just wanted to put it on record some place that Mr Biggs has passed away. He wasn't technically my cat, but he was my friend. I loved him and cared for him as if he was my own.

I'm glad I took a couple of pictures of him, and I've included one where he was sitting here comfortably next to me. He was happy to be in this humble trailer with me when he got the opportunity. I hope in some small way I made the final days of his life more comfortable, but I wish I'd been a little bit more understanding than I was.

So long Mr Biggs, you will be missed. Say hello to Kitty, Sami and Bear If you see them. I'll see you on the other side.

Keeping A Memento To Remind Me

Awww Sorry for your loss. It's always such a wrench when they leave. We only had one dog and losing her was dreadful but we stayed with her to the end. They deserve that - as you say, they give so much!

It hurts something awful when we have to put them down, even though we do it for their sake. I think there's no excuse for the person who waits for a pet to die, even though they have to suffer for some time.

I take photos of them all, and from time to time, I put those photos up for my desktop.

That is sad news. I have lost many a pet, cat, dog, rabbit, parrot, parrokeets, a turtle, so I know how it feels. Sorry for your loss.

It is something, isn't it, Anthony. Funny thing is, sometimes the death of a dear pet hits home more than a death of a family member or a friend. Maybe it's because the pet was so "true".