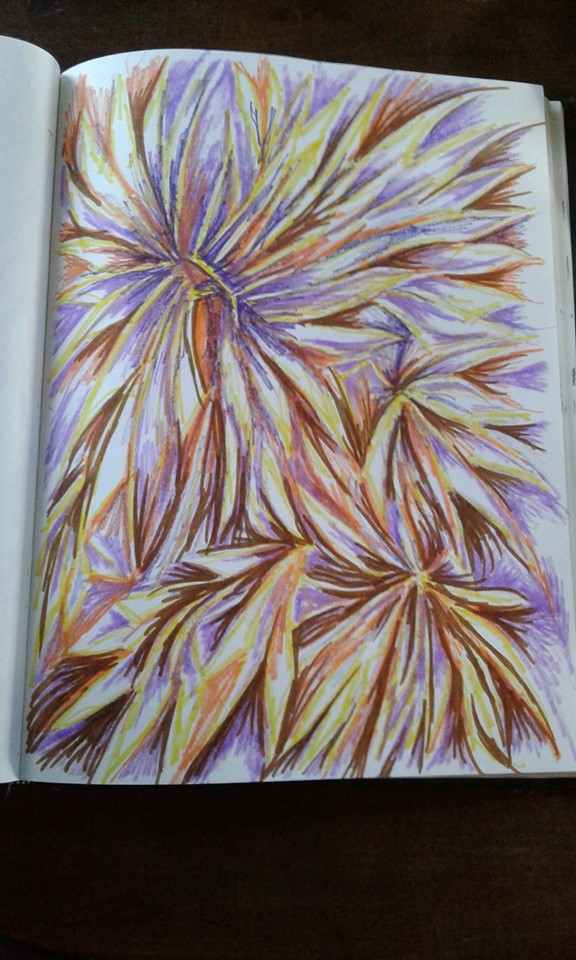 4. Made three new drawings in my sketchbook

7. Stalled out at one finished art project

13. Made no eBay listings

15. Gotten four things out of the garage

Now it's been over two months later, and if anyone was wondering if I forgot all about these resolutions or stopped bothering with them, the answer is actually no, I'm still plugging away, and I have made progress (in some categories way more than in others).

First, the bad news - due to serious problems with my right knee, I was unable to continue walking 20 miles a week. I had surgery last week and am healing up nicely, but I'm not going to be able to make that resolution, so I am retiring it as unachievable. However, the good news is that I am also retiring two more goals as successfully finished! I reached level 20 on Duolingo in both Spanish (on May 27th) and French (on June 10th). So that's two more things off the list!

Turning to the remaining 17:

There are five categories in which I have made NO progress. Zero. Zip. Zilch. In two and a half months! I haven't culled any additional wardrobe items after that fast start, so I'm still sitting at nine. However, nine isn't necessary a bad place to be, since I still have five months to work on it. I am STILL stalled out at one finished art project, two Etsy listings (I have renewed some expired listings, but my goal was to put 20 new items in the store, so the renewals don't count), four things out of my garage, and zero eBay listings.

The eBay listings, however, is the only category that remains at zero. The other two were weight loss and poems, in which I have made very modest progress, losing a pound and writing two poems, so--small yay. Other modest gains: I've written two more blog posts and taken another beautiful picture.

Now here comes progress--in the remaining categories, I have made greater inroads: four more books read, four more pages filled in my sketchbook, 4 new scarves and a hat knitted for the homeless, five more web articles (including this one), six more hand-written letters, seven additional charitable donations, nine new places visited, and a whopping 11 new friends made, bringing my total in that category to 16. I think I know what my next goal achieved will be!

Even though my knee problems eliminated my chance at scoring a full 20, there is a positive side to it: having to take time off work following surgery has allowed me to be more productive in working on my less physically demanding goals, like reading, knitting, and writing, and it has also given me several additions to my "new places" list (doctor's office, surgical center, MRI imaging center, and physical therapy office). There are certainly more fun places to visit, but everything counts!

Pictured is a new piece from my sketchbook. Technically, it's an abstract, but it looks a lot like either feathers or flowers.

Image Credit » My photo of my original artwork

#20Resolutions Update - Another Month Passed, Another Goal Achieved (But So Many Remain)!

That is an absolutely BEAUTIFUL sketch. I thought it was chrysanthemums but as you say, it could also be feathers. Whatever - it's lovely. Hope your knew continues to heal properly and I admire the way in which you have made lemonade from lemons by getting more time to do other things and finding new places to visit. Instead of making huge, seemingly unattainable goals, you are achieving them one step at a time!

At more than 300 lbs, you'd think my knees would be bad, but they're still trouble free. Not much else is. I'm no cowboy, for instance, yet I have to call one of my fingers Trigger. And another one threatens. Others are just a bit stiff to start the day.

I sit most of the day. I often need help such as standing back up from a deep chair,, pulling up my socks, etc.

I write, though the topics I write on have a limited audience.

Sounds like you are a most determined person! That should go a long way toward keeping you going.

Thanks! I just wanted to do something loose and fast, instead of the time-consuming, detailed work that I typically do (and can't get finished in one session). I just used the colors of magic markers they had available (we go to a pub that has art supplies for "Drink and Draw"). I actually did a bit of work on a couple of my unfinished art projects last night, and it felt very good!

I have knee and shoulder issues that are always going to be problems, so I have to be careful. Losing weight would definitely help, and I need to do better in that regard. I would highly recommend Duolingo for getting back into your Russian. It's free as the breeze, and you can either start all over for a full review, or you can test out of what you know already.

Drink and draw - that sounds good. Must suggest it to some people I know.

Eh bien je suis heureuse de savoir que tu as finis ton cours de francais... Yes I am French Canadian born and raised. Congratulations on achieving most of your goals. Keep it up. I wish I had your energy level...

Yes... At least, you are trying to complete the stuff that you want to do within a month or a quarter. Looking forward to be like you also.