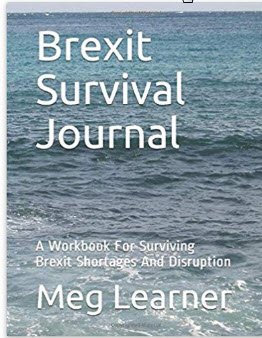 Do You Know What Brexit Is?

It applies only to the UK but it will also affect Europe and every other trading nation in the world. Brexit stand for BRitish Exit from the European Union (EU). Britain joined the European Economic Community (as it was then known) in 1973, 46 years ago and voted by 2 to 1 to remain in it in a referendum a few years later. Then, in 2016, there was a referendum to see whether the British people wanted to stay in the EU and there was a small majority in favour of leaving. The country was split almost 50:50 on whether to leave or stay and this has caused a great many problems.

Most of the problems seem to have arisen because no one actually expected the "leave" campaign to win, so there was no discussion about what would happen or how it would be done before the referendum took place.

The Prime Minister appointed after the referendum failed to secure a Brexit deal that a majority of the House Of Commons (equivalent to the House of Representatives in the US) would agree to. A new Prime Minister, Boris Johnston, has now been appointed who says that Britain will leave the EU, deal or no deal on 31 October 2019.

If there is no trade deal in place on 31 October 2019, then imports and exports between Britain and the rest of the world will be affected. Many customs and import and export rules are all tied into membership of the European Union. There is also a land border between Northern Ireland and the Republic of Ireland that at present is entirely free and unrestricted. This was included as part of the Good Friday Agreement concluded in 1998, which brought peace to Northern Ireland. If Britain leaves the EU with no agreement, then there will need to be some kind of border controls between Northern Ireland which will leave the EU along with the rest of Britain and the Republic of Ireland which will remain in the EU.

Many businesses are making preparations for what will happen after Brexit. Supermarkets are stockpiling about 3 months worth of goods, whereas normally they bring in items on a "Just In Tine" basis, which saves stockpiling. Fresh food cannot be stockpiled. Many items used in Britain are imported, for instance all the beans used in Baked Beans, probably Britain's favorite food, come from the USA and other places because the navy beans cannot grow in the British climate. HP brown sauce, another avorite item is made in the EU. Supplies may be delayed coming through the ports and preparations are being made to turn parts of the motorways (freeways) near major ports into lorry parks, to cater for possibly 25 miles of lorry queues.

Anyone looking at this is making their own preparations for making sure they have enough food and means of staying warm well ahead of 31st October 2019. Maybe everything will go smoothly, let's hope so: but if it doesn't make sure you have plenty of baked beans and toilet paper stockpiled while the problems are sorted out!

Image Credit » Image I purchased and have the right to use.

Lessons From The Ducks

Governments are always a source of trouble, to be honest. They take the lead in fulfilling the prophecy which points to "anguish of nations, not knowing the way out." They try to fix things, but in so doing throw other things out of kilter. It's an ongoing process. It's not just one nation, either. It's all of them.

Yes, because IMHO politicians are interested only in short term fixes for their own country and their own party. They are not interested in the nation as a whole and definitely not in the global situation. Many of them also appear to be in the pay of large industry that is looking solely to make profits, no matter what other harm they do.

i honestly think its all scaremongering - I mean are the people in what's left of the EU going to suddenly stop buying/selling from/to us? Of course they are not! Customs is an issue that could and should have been sorted within the two years Brexit was supposed to take. Perhaps if they had negotiated the exit deal instead of going in making demands then the rest of the EU would have been more likely to give us a better deal. At the end of the day the EU could now turn round and tell us time is up and we leave with no deal, everyone is going on like the power is in the hands of the UK but its not, its in the hands of the EU as it always has been. They don't want us to go which is why they have been granting extensions because they know that when we go and things work out ok, other countries will follow us right out the door. I am certainly not against a common trade agreement or many of the other original intentions of the EU, but its so out of hand its literally taking products off our shelves and setting our prisoners free, we make the laws in our own country just for them to overturn the ones they don't like. There will be issues after Brexit, of course there will it is after all a major change to how we do things, but they will be overcome and we will get some of our rights back.

Boris on the other hand, well I have no idea what we do with a problem like Boris

They will stop buying if our food laws change to accommodatethe USA's very different food laws because then the food we produce will not necessarily meet EU standards. If trade tariffs are applied, which apparentlyunder WTO rules is required, our goods will cost more. Like anyone else, price is a factor. I am old enough to remember life before the Common Market. Food costs were a LOT higherthen. Food costs dropped dramaticallyafter we joined the Common Market. I am not saying that we are all going to starve, just that theremay be supply difficulties and it's prudent tp prepare just like I keep a stock of items in my pantry.
I am travelling at the minute and needed some Euros which I got from the local post office. It was practically at parity! I got 50 Euros for 49 GBP. The value of the pound is dropping.

The UK has some of the strictest rules around food and chemicals in the world - in most cases stricter than required by the EU (which is probably why its infuriating when the EU decide we are no longer allowed to have certain ingredients in products, our laws are already super strict). Prices will change, that much is almost inevitable but people on the continent aren't simply going to stop buying from us or selling to us. There may be supply difficulties because of how poorly prepared we are, I think that will be the big issue - we have had more than the agreed two years to prepare for what will happen, to set up procedures to get things moving but instead we have spent the whole time arguing and making demands. I think there will be good and bad when we eventually leave, but I honestly think other countries will leave after we do.

If we leave and things end up so much better for us then I can see the whole EU collapsing. Greece for one is desperate to get out, being part of the EU has bankrupt them to the point where they couldn't afford the divorce bill mind you.

The issue I have is that being in Scotland, there is a good chance they are going to call another independence referendum (once in a lifetime the last one was!) and that will cause even more hassle

Melody23 I agree that it will be sorted eventually and that we are poorly prepared because they have spent all their time arguing. My Brexit Survival Journal is a practical one, aimed at helping people get over the interim period with supply difficulties. It has no political information or opinions one way or the other. Toilet paper tomorrow doesn't help when there is none in the bathroom today, no matter which way you voted in the referendum. I am really suggesting people build up a small stock of their usual, everyday stuff to tide them over any early teething problems. Both Scotland and Northern Ireland voted to remain in the EU but England and Wales are bigger. I wonder if any of the States in the US wanted out in the early days (apart from the South in the Civil War)?