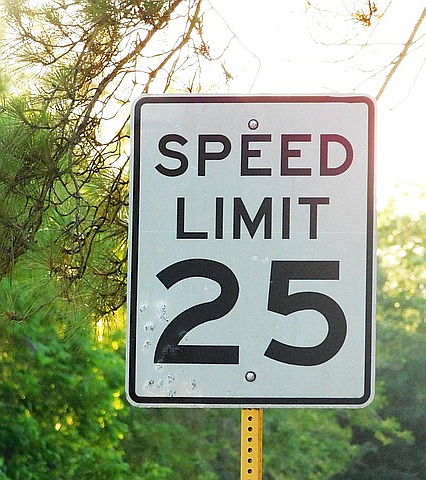 There is a word in English, "society". One definition for it refers to subsets of humankind, "clubs, or organizations formed for a particular purpose or activity". The root concept being members share something in common. The word "union" comes to mind, or perhaps even "unity".

There is another meaning to the word society. Capitalize the word, and we think of Society, the collective group of individuals under a particular government, or even mankind in general. One word does NOT come to mind. You guessed it. That word is also unity. Society is little more than a collection of people with just about every conceivably different notion in their heads that you can come up with. Some might suggest the descriptor "free will" comes to mind. But a better word to describe that condition is "anarchy".

One small example of that crossed my mind today. It involves Law. There are three sides to the law. The law enforcers, those who obey the law, and those who defy the law. However, there is another group outside that group of three, as you will soon see. And it exercises a degree of control over the other three components. I pick speed limits. Speed on highways may be controlled for the purpose of maintaining public safety.

To enforce speed laws, there are the police. They employ radar to detect the actual speed of a passing motor vehicle.

Those who obey the law observe speed limits. Nothing more need be said concerning them.

Those who defy the law often ignore highway speed signs. Some among them employ electronic devices designed to detect radar in use by the enforcers. If their radar detector alerts them radar is in use, they slow down their vehicle, to avoid "getting caught".

After the appearance of radar detectors, the police began to employ radar detector detectors! This worked for a while. Until the detector detectors were improved. Which introduces the fourth element, greedy commerce. Anything for a profit, these dollar worshipers represent an additional anti-unity element to that definition-oxymoron, Society.

yes. Another way of getting round the radar speed traps is using a special spray on the vehicle registration plate. The number plate looks perfectly normal to the human eye but the cameras on speed traps just get a flashback from them, so they can't read the plate. Its use is illegal in this country but it doesn't prevent people trying it.

Yes and America sells military weaponry to countries that are unstable and hostile even to America potentially for a buck. We pay the telephone company extra to use caller Identity but there are those who have the ability to make their calls appear as anonymous so the telephone company came up with another thing to pay for, anonymous caller rejection. And so on and so on. They put you on a national do not call list and then the calls come in anyway. How is this fair? New users of internet get an offer for a 12 month discount on high speed internet, but loyal customers keep getting rate increases and if a loyal customer complains the telephone company asks them if they want to lower their bill by lowering their internet speed and by so doing the customer ends up being asked if they would like to try the 300 megabits per second option that is being offered for 12 months at the same rate of 100 mbps knowing all that well when that 12 months is over, the rates will perhaps double.

If they make cars that can travel at speeds upwards of 120 to 160 miles per hour, but make roads that are unable to be safe at that speed, and know that people can lose control at speeds past 50 mph or greater, so they continue to allow faulty air bags until someone gets killed then they do a factory recall to all car owners of a particular year and make and we got one of those. Last week we were told our particular car, has a recall on the air bags as we could get injured or killed if in a head on collision due to a fault in the design of the air bags of our particular vehicle. So we drive even more carefully to avoid accidents but then if we try to get the car to pass inspection no doubt the car will not pass until the air bags get replaced by the dealership, only we did not buy it from a dealership. It was given as a gift by our son due to the fact our other car is beyond repair. I guess I wanted to vent a bit.

Whether the car passes inspection depends on the legislation. In this country, airbags are not part of the inspection, so a fault with them would not form part of the test, nor would a recall on the car for airbags fail it on the test. Good seat belts are more useful than airbags.