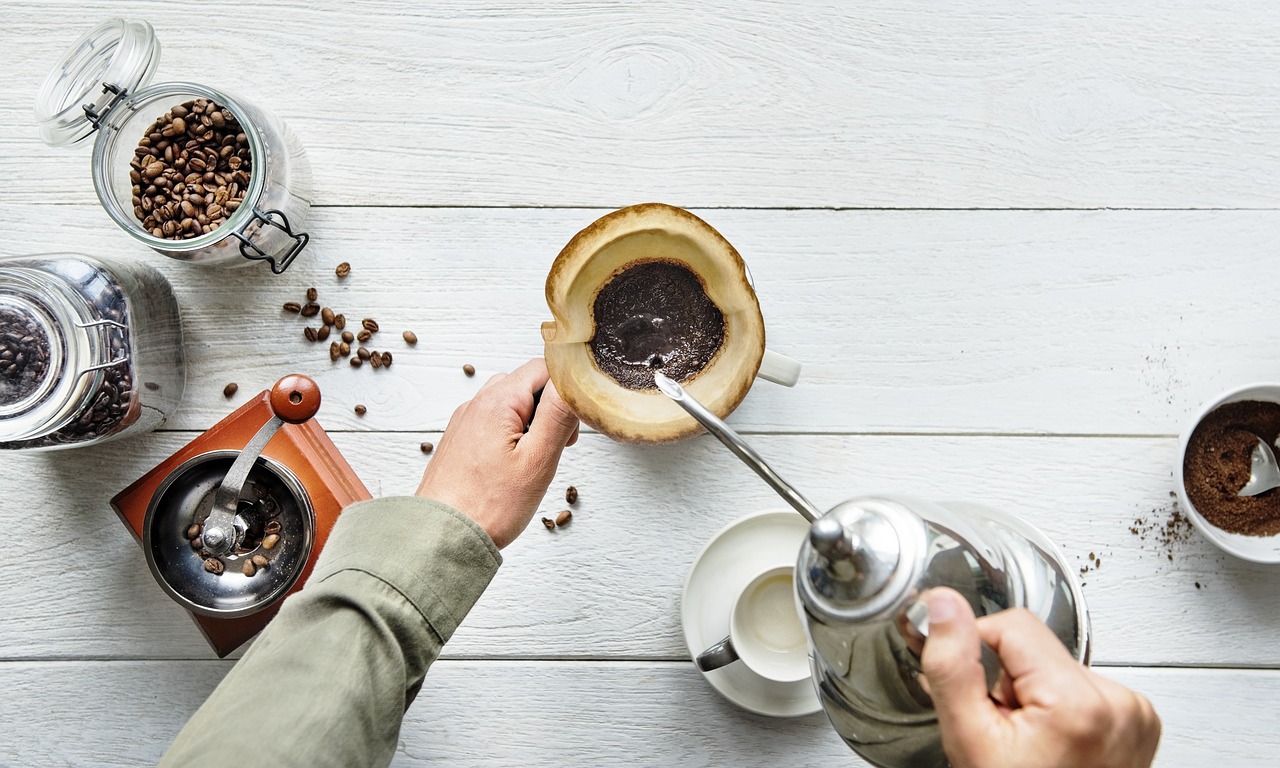 Water for coffee must be between the temperatures of 195 degrees to 205 degrees F, but not as high as boiling which is 112 degrees F. I have been microwaving my water for only 3 minutes all this time for tea and coffee for the French press.

From a book I've been reading it states that you can not properly brew coffee at temperatures below 195 degrees F or above 205 degrees F . That said, I took a pocket thermometer to a cup of 3 minute microwaved water and it only reached 160 degrees F . I placed that cup back in the microwave for another extra minute and after that I removed the cup and inserted my pocket thermometer and it only reached a maximum temperature of 180 degrees F. I was still 45 degrees under par for the minimum temperature to brew coffee.

So I poured out that water, filled the cup with purified carbon filtered tap water and set the microwave to 4 minutes and placed about one and one half tablespoons full of medium ground coffee in a copper coffee filter. I placed it atop the French press, as a pour-over coffee method instead of pressing the coffee after pouring over the 180 degrees microwaved water and came up with a better cup but still it was not the best cup as the 180 degrees was under par for the minimum water temperature of 195 degrees F. by 15 degrees F.

I was happy that I found that not only could I later make sure my cup of water reached the minimum at least temperature if I sat a pot of purified water on a stove top and took it's temperature with my pocket thermometer until it actually reaches the minimum 195 degrees F and also was happy that I was able to make shift a cup of pour over type coffee by placing the copper filter that is designed actually to go into a drip coffee machine, over top of the French press and allowed the water to filter through into the French press until all the water went through.

I put 4 rounded teaspoons of light brown sugar in the 16 oz coffee mug, poured the 180 degrees F pour-over brewed medium roasted coffee into the cup from the French press and added coffee creamer. I am drinking this cup and enjoying it more than ever before. I am still learning but will try to eventually perfect my coffee making techniques over time.

Remember, do not use tap water unless you carbon filter it first to get rid of the chlorine. Don't use mineral water. Do not even use distilled water because the essential minerals that are in regular water are missing and the minerals of regular water that we generally drink every day, help with the flavor and the brewing of coffee to make the coffee taste essentially better in all respects.

Unfortunately I must end this article due to the fact that my coffee has been sitting beside me while I write this post only to reach room temperature and I will now have to microwave it back to a desired temperature of about 140 degrees F. Enjoy your next cup of coffee by brewing it at between the temperatures of 195 degrees F and 205 degrees F. not to reach the boiling point of 212 degrees F at sea level, of course.

Big Pharma's Got your number.

Lifeline support will be stopped and landline phone bills will go back up.

I crave 2 cups of coffee in the morning. But my ritual is a lot simpler. My wife (yes, she is up before me) puts ground coffee in the coffee maker. She pours water into the water compartment. She (drum roll, please...) pushes the button. Voila. Coffee. We don't add any sugar. None. Half-and-half has enough milk sugar in it already. We add a goodly quantity, but not as much as the French do... Then we drink!

LOL. I boil the kettle. Meanwhile, I add full cream milk to a cup along with a spoonful of instant coffee. When the kettle boils, add water to the cup. The cold milk instantly drops the water temperature below boiling. No thermometers, no waiting to brew, just wait for the kettle to boil.

I'm reading from a book by a woman who's husband is a barista. There is a bit more attention to detail in making a fantastic cup of coffee and yes, I too am guilty of just using the one button drip coffee maker method.

My point is, going beyond the basics, creating a cup of coffee that is so delicious that it makes you crave more and more. Meantime I have to finish reading that book and buy a pour over coffee setup. I have a way to go before I can master the true art of essential coffee. Meantime I am basically a beginner.

I'm not a big coffee drinker anymore but I use to just use the auto coffee maker, one button and done. Now I drink more tea sometimes just the tea bag, easy and quick but sometimes loose leaf, more work and slower to get done but much better taste.

The same likely applies to the temperature of the water to get the best flavor from a tea bag in a single cup. I started microwaving my water for 5 minutes with the teabag in the cup of water and it was much better tasting. Instead of the usual 3 minutes in a microwave oven. Some people swear by drinking tea with the tea bag still in the cup until the cup is finished being drank. I usually remove the teabag after dunking the bag a few times after removing the cup of tea from the microwave oven. It's a matter of taste I would have to guess.

Yes, I remove the tea bag before drinking I would guess it would just get stronger as you go if you leave it in there.

I usually do remove it after a few dips with the teabag. I don't like it to become too strong.

Speaking as a confirmed 'Tea Jenny' I must state that when making a cup of tea the water MUST be boiling when it hits the tea(bag). A lesser temperature will result in a cup of tea which can only be described as - Yeuk! I am also a 'MIFY' as opposed to a 'TIFY' ( MegL will know what this means!) but that is largely a matter of taste.

We use tea leaves and a teapot. No teabags in this house. The milk goes in the mug and the teapot is warmed, tealeaves added, then BOILING water, straight from the kettle added and left t brew. We use a tea strainer to catch any leaves

A question - why are you using the microwave?

To quickly heat up the water or reheat a cold cup of coffee that stands too long and becomes Luke warm. I will use the stove top to boil water if I have time and of course, I usually do but I am lazy sometimes.