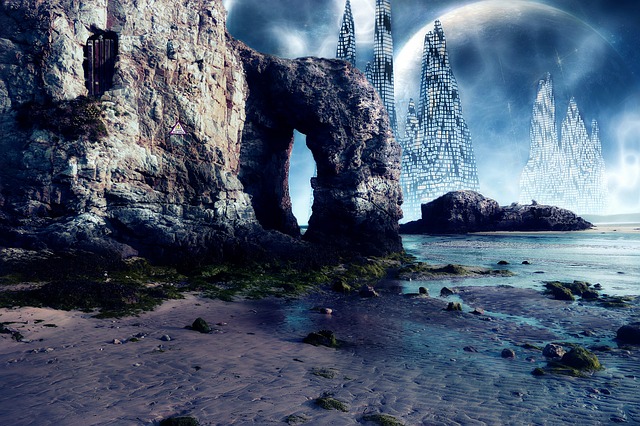 The structure was 1000 stories high and 500 stories below made from giant beings from another planet, who's legacy was buried deep in the ice never to be revealed for over 10 thousand years, in Antarctica. Recently revealed to orbital satellites used to map the entire world. The global temperature had already reached past the point of no return. The melt from the rise in planet's methane and CO2 releases from deep beneath the permafrost in the Arctic made it easy for cameras to zoom in on long hidden architecture that had been unknown to this very day.

Walking up the spiral staircase to a platform of glass, Tony sat at a table and was given a book to read while waiting for the presentation. Today was the day when at long last, Project MP5-D would be revealed. Colors of Green, Blue and Gold reflected rainbows of light on the chrome lined edges of the sound stage. Performers gathered for a concert, taking their instruments out of their cases and putting the music sheets in front of them.

Once the players were all ready, the lights dimmed in the space where the audience of one sat. The lights turned on in many colors and the songs began to play. First a piano solo by an Italian master, followed by a duet by a man and a woman singing a love song. Finding it difficult to appreciate a song in French, Tony could feel the emotion coming from both singers, with a moderate background of electrical instrumentation, but delicate and uplifting as the woman sang solo, alternating with the man. Russian ballet dancers performed a swan dance of sorts to the music being played.

After about 20 minutes of song and dance, they all left the stage. It was now time for Orion Mike to begin his lecture. It was about the latest Virtual Reality Journey. It was named the MP5D Project. No one knew just exactly what that project was all about. In truth, it was something kept secret. Tony Franks would be the first to know about it. He waited patiently, while sipping on coffee from Mars. Imported coffees, grown on the Martian soil was incredibly delicious. In fact, no one could afford it unless they were among the few who had relatives living there.

Tony had a nephew who was living on Mars. He was 32 by now. He had been working there as an agricultural consultant for the Bios Two Group. They had already managed to grow small trees in some regions. More than just agriculture, the insect population had doubled since the first day they removed the first biosphere and the skies of Mars never looked so good as they did now. Instead of a burnt orange, a very nice variation of shades of blue.

The coffee was heavenly. Tony was already age regressed back to a chronological age of 50. He had reached 91 back in 2048. He had lived over 120 years but didn't look a day over 45.

Autumn is my time of year.

Are you a potential victim of the latest KRACK ATTACK?

Interesting start. Look forward to more of this.

I will try to add on to it. Thanks. On one level the title is not a good one. I Googled my title just to see if such a thing as an MP5D existed in some shape or form and came up with a hit and it was about submachine guns. I might need to change that title before even trying to write more on that one. Good grief!