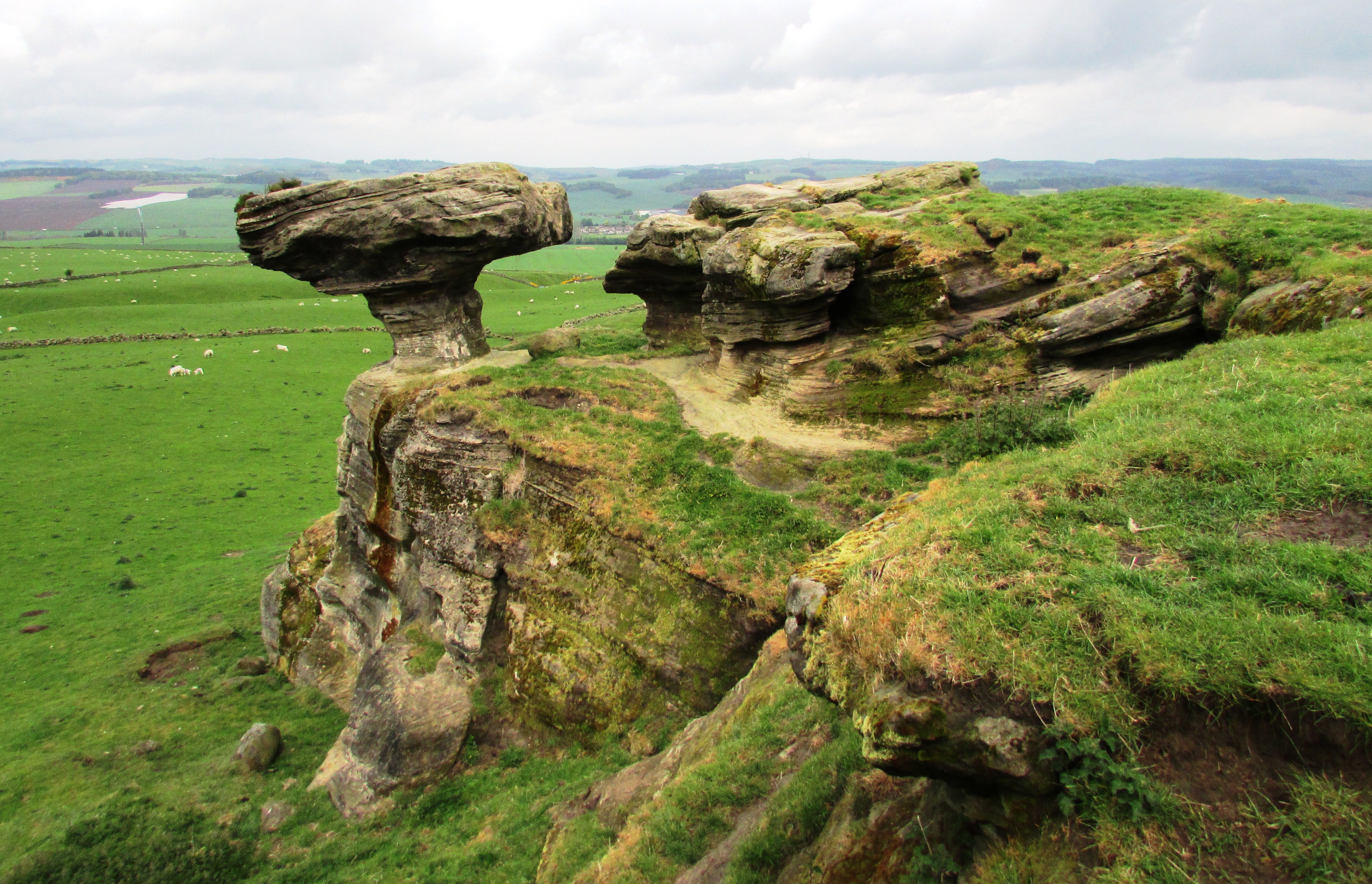 HELLO EVERYONE! It's been some time since I last posted here but I haven't forgotten you. I have been busy elsewhere with a series of photographic projects which have taken up quite a lot of my time and had me out and about in two of my favourite environments - the Scottish hills and the historic village of FALKLAND .

If any of you watched the recent TV drama Outlander then Falkland is one of the places where scenes were shot - it doubled as 1946 INVERNESS - and it is only a 20-minute drive from my home. My wife and I have spent many a pleasant afternoon wandering its quaint streets, talking with the locals and sampling the delights of its coffee shops and restaurants (and its bars!).

The weird-looking rock formation you see here (open in a new tab for a better look) is not too far from Falkland. It is known as the Bunnet Stane (Bonnet Stone) and falls within the boundaries of the Lomond Hills Regional Park. It is a place I know well having roamed and explored this regional park for the best part of 40 years (even before it became a regional park).

You may wonder at its odd shape. Well, there is only one natural force which can sculpt rock into such a shape and that is water. This is evidence that at one time the pillar of the Bunnet Stane was emersed in water with the 'cap' being just above the waterline. The soft rock of the pillar was eroded away to leave the distinctive cap or bunnet.

There are other strange rock formations in the regional park but none as weird as this one. Is there anything similar near where you live?

It is part of the Lomond Hills Regional Park and as such is covered by certain legislation but it doesn't have any kind of special protected status that I am aware of.

Nothing like it here. The signs are apparent to me that the only thing strange is the fact that they used explosives to blast out some areas to make roads in Dallas.

Lovely photograph. When I was a child, in the days when children roamed widely, without fear of their parents being prosecuted for neglect, there was an enormous stone a couple of miles away, called the rocking stone. Not created by water, but interesting to see. It was so big you could slide down it and one time I had to walk home with the backside worn out of my shorts!

I remember similar experiences as a child. It was all great fun until you got home and your mum saw what you had done!

LOL, that's true! But I went to play at someone else's house once and they had a whirly toy that two children sat on and pulled a lever to sent you whirling round like on a merry go round. The other child told me to try it with my eyes shut whereon I fell out and ripped my dress from hem to waist! My mother was NOT amused. On the other hand, when I climbed the tall tree to get the rope swing unstuck or walked the big water pipe 12 feet above a ditch, I didn't damage any clothing so my parents never knew!

I live about an hour and change away from Pilot Mountain, which looks a lot like a breast, complete with nipple. It's a nice place to hike.

There is a hill in Glencoe known as the 'Pap of Glencoe' which has a similar profile.