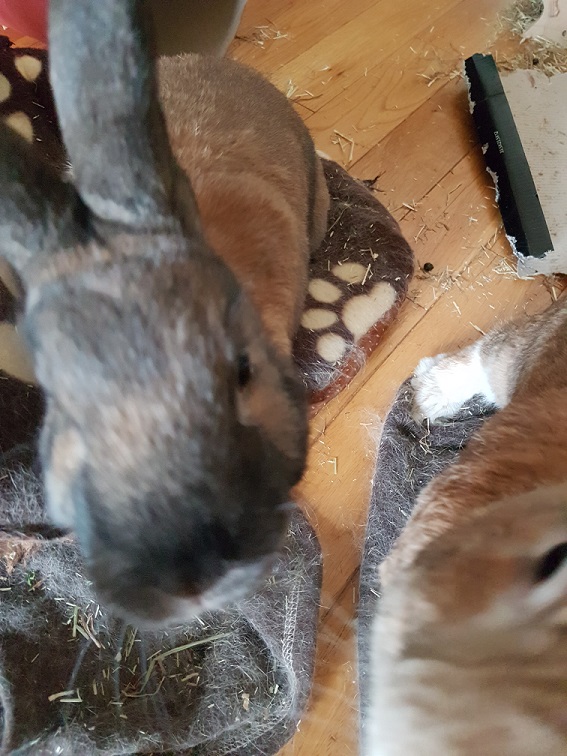 Today is Bramble's gotcha day! Three years ago he came to live with us and what an amazing difference he has made to our lives.

When Bramble was just six weeks old, him and one of his siblings (you can't tell their sex at that age) were brought to my house for me to choose one. I could never have chosen and had no idea how I planned on making such a choice. Then I reached into the carrier with the two tiny kits with the intention of trying to see which one was friendlier or something along those lines, the one that would become known as Bramble immediately started licking my hand and that was the end of the story.

I brought him up the stairs in a cardboard box and lifted him into his tiny baby cage, it was all I could get at such short notice as I had only found out we were getting him the day before. Soon I had bought him a massive playpen and later a dog crate to attach to it so that he could live in that permanently and never have to go into that tiny baby cage again. A year or so later, Ron also came to live with us and the two became best friends.

This picture is typical of them (Bramble is on the left) they are trying to see if I have food for them, once they realised that my phone was not edible they quickly hopped off in disgust!

The boys bring such joy into our lives, but also a massive responsibility. It makes me so sad to think that some people think its ok to stick rabbits in a hutch at the bottom of their garden and just leave them there. Rabbits need so much love, attention and space to hop around in. Our boys living area takes up half our living room, and they still get plenty of time to hop around outwith their living space. They get regular vet visits and we try super hard to do our best for them - in return they fill our lives with cuteness!

My body clock is messed up

Awww, I chose a cat once because she licked my hand, too. That's how they get ya!

Gosh, I remember you writing about Bramble and Ron. It doesn't seem like 3 years!

Oh he got me right then and there all right, little cute fluffball that he is!

We owned a white rabbit named 'Sweety Pie', bought at a local H L Greens department store in Downtown Dallas back in the early 70s. I was quite fond of her.