Saturday In The City 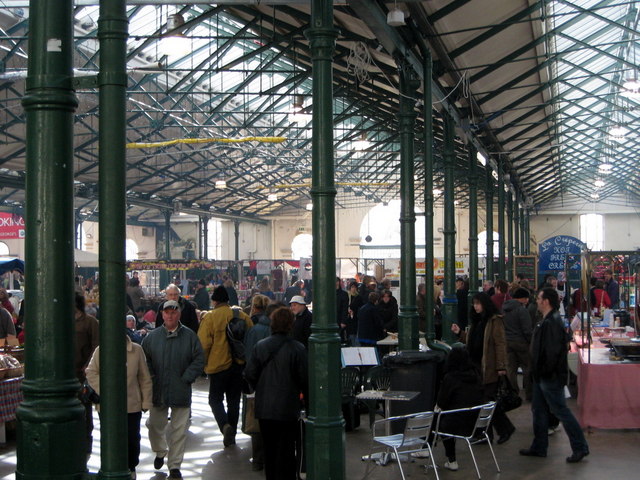 This is the nearest city to me and every few weeks I like to go into Belfast, either on a Friday or more usually on a Saturday. Quite often, I have a grandchild or even two with me. They like going in because they often get a bun in St George's market, which buzzes vibrantly and has live music. I managed to find a photograph of it on Wiki Commons, which I hope you will enjoy.

They also quite often get a book from Waterstones or Eason's in Belfast City Centre, so that's a treat too. Of course, I would prefer to go in by myself but it is also fun to see their reaction to the sometimes odd forms of entertainment in the city. During the summer, there are often buskers and street performers. Some of them are made up like statues and stand very still but one year, a young boy stole the money from the cap in front of one of the "statues" and it was surprising how fast that statue moved to chase him down!

We went in last Saturday and the entertainment that day was a travelling bar. Driving round the streets of Belfast was what looked like a sit down bar from inside a pub. It had a table, covered by a canopy (this is Northern Ireland where it rains a lot). Seated at both sides of the bar were a number of young men pedalling for all they were worth. They faced into the middle of the bar and pedalled normally but the bar travelled in a direction in which they would feel they were moving to the side. Two of the men at the front steered and operated the brakes.

Decluttering For Your Health

Now that would make me so dizzy I would not want a drink in any case. The statue running after the thief would have been fun to watch.

It shocked the children, they were open mouthed!

Your grandchildren certainly pester you to bring them along .Over there they kick up their heels ,much more the buns,books ,street performers and the like .I have no idea what the travelling bar is like .

I cannot find a picture of it. But imagine sitting at a bar in a pub. You are on a stool and the bar is in front of you. In this bar, there is another customer sitting opposite you. There are 6 or 8 other men also sitting at the bar beside and opposite you. Now, instead of resting your feet on the bar rail or the supports of the bar stool, you are pedalling a bike. But instead of moving forward in the direction you are pedalling, the whole bar is moving sideway. I think I would be with lookatdesktop here, I would feel giddy.