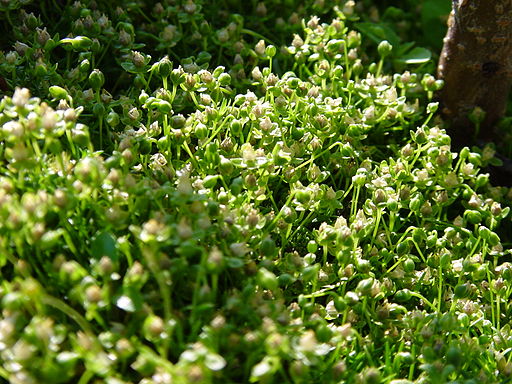 Procumbent pearlwort (Sagina procumbens) is common throughout Britain on lawns, banks and grass verges. It is also found alongside footpaths.

The connection to pearls is not immediately apparent when viewing the plant, although it might have been thought that the seed-pod or unopened flower was similar in shape to a pearl. “Procumbent” simply means that the plant grows along the ground.

Procumbent pearlwort has been associated in legend and tradition with Jesus Christ, as being the first plant he trod on when rising from the dead. In the Highlands of Scotland it used to be believed that the plant had been blessed by St Bride and St Columba, as well as Christ.

Traditions involving pearlwort include hanging it from the door lintel to ward off fairies. Another is that if pearlwort is inserted between the “toes” of a bull’s hooves it will confer protection against all ills on the cows with which it mates and the calves that are subsequently born. If it is eaten by a cow, anyone who drinks the cow’s milk will not be troubled by fairies.

Pearlwort also acted as a love charm, in that a maiden who drank an infusion of pearlwort would attract the man she wanted, and he would be bound to her forever if she had a piece of pearlwort in her mouth when she kissed him. You might almost imagine that there was a “Pearlwort Marketing Board” at work here!

With all these advantages, one might expect procumbent pearlwort to be a somewhat spectacular plant. Far from it! It is a mass of slender stems that branch out from a central rosette, with pairs of small leaves growing along the length of each stem. The plant can reach a height of 8 inches (20m centimetres) above the ground.

The flowers, which appear from May to October, are tiny and are borne on long stalks. The flowers consist of far more sepal than petal and therefore have little colour other than green. The sepals form a cross-shape in fours. The flower stalks droop after flowering but become upright again as the fruit ripens.

I think I have read about this in various works of fiction that tend toward legends like the Lord of the Rings as such, but I like the idea of the spiritual side and Jesus walking on them.

That's an interesting plant. As you say, the pearlwort marketing board has been busy!