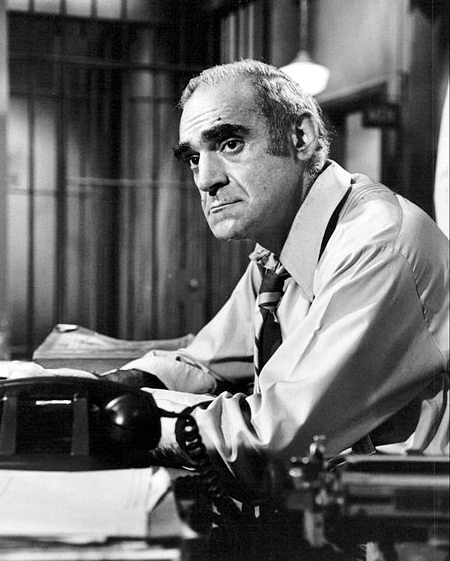 In 1982 the celebrity magazine People referred to "the late Abe Vigoda." The problem was, Vigoda was very much alive. To show there was no hard feelings, Variety ran a photo of Vigoda, sitting in a coffin, holding the magazine that had declared him dead. in the years following Vigoda was incorrectly declared to be deceased so many times that someone created a web site where people could check his status (a simple photo of Vigoda with the words, " Abe Vigoda is alive. Reload page for update. ").

The veteran character actor died today (1/26) at his daughter's home in New Jersey. His daughter said he "died of old age."

Vigoda had a long list of credits dating back to the late 1940's. He had a number of guest starring roles in his career, including episodes of Murder, She Wrote, Eight is Enough, The Love Boat, and even the cult classic vampire series Dark Shadows . Despite all his work, with an IMDB credit as recent as 2014, Vigoda has two legendary roles for which he is best known.

He played Phil Fish on the classic ABC police comedy Barney Miller. His character was spun off into his own series, Fish .

And, speaking of fish, Vigoda's other classic role was as Salvador Tessio in The Godfather. In one of the legendary scenes a package is delivered to the Corleone house. Sonny opens it, seeing a fish wrapped in a bullet-proof vest belonging to Corleone bodyguard Luka Brasi. "What the hell is this?" Sonny asks. Tessio replied with a line that has worked its way into popular culture: "It's an old Sicilian message. It means Luka Brasi sleeps with the fishes."

In the film Tessio turns traitor after the death of Don Vito Corleone, setting Michael up for an assassination. Michael is aware of what is going to happen (thanks to what Vito told him about the workings of being "the Don"), however, and has Tessio taken off to his death (which, unlike several other deaths in the film, isn't shown). When he realizes what is about to happen to him, Sal turns to family lawyer Tom Hagen and delivers two additional classic lines from the movie: "Tell Mike it was only business," he assures everyone. He then asks, with a sad smile, "Tom? Can you get me off the hook? For old time's sake?"

Among the other great things that Vigoda did in recent years was appearing in a Snickers commercial with Betty White .

Image Credit » Abe Vigoda in his well-known role as Fish on "Barney Miller." From Wikipedia: https://commons.wikimedia.org/wiki/File:Abe_Vigoda_Fish_Barney_Miller_1977.JPG

The Magic of a Sing-Along

I liked him as "Fish" on Barney Miller . Great lines were his...

Harris: Hey, man. They already closed down three fire stations. They could do the same thing to us.
Chano: Not as long as there's more crimes than fires. You see the thing is people commit crimes to eat. But people don't set fires to eat.
Fish: They do if they want something hot.

But, ultimately, perhaps the best, most prescient line in regard to today's news...

Fish: [on the phone] Lady, who you gonna listen to, me or your computer?
Barney: [to Yemana] Doesn't look good.
Fish: You won't believe this, but according to their records I'm deceased.
Barney: It's probably a mistake.
Fish: I wonder.

I loved his character on BM and Fish; I have to admit it - when I saw it on Yahoo I thought he dies years ago. I hope his final years were peaceful and he went out with a smile on his face.

He got to live to a grand old age which is more than most. To me, Tessio in The Godfather is his most memorable character.

Outlived the first death notice by over 30 years! I wonder if there's a website that tracks those "tales of my death have been greatly exaggerated" notices and how long after people live for?

I to thought he died a long time ago and I was shocked that he just died. I remember 'Barney Miller' and the character of 'Fish' and his spinoff as well even though it did not last long.

I've seen his photo a number of times. But would you believe it? I've NEVER seen him in a role, acting. Not even once. I will try this poor fellow out. He looks like the kind of guy I would like to know.