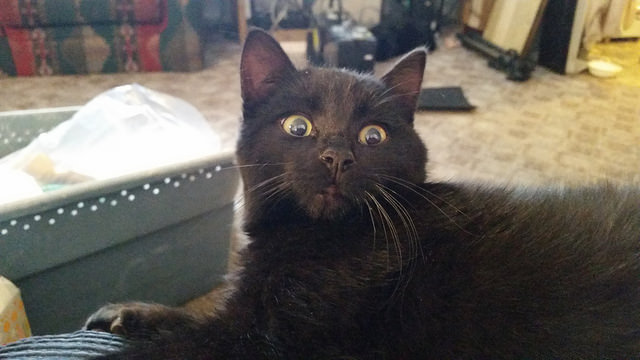 This little fuzz ball (well, not so little, he's at least 3 months old) came to live with us the week before Christmas. Didn't intend to get a new cat, but as usual, things happen.

We'd gone out to our friends who live about 5 miles out of town so hubby could get their TV re-set. As soon I got out of the car we hear "MEOW! MEOW! MEOW!" from under the nearby RV. It was a "I'm starving and cold and scared!!!" meow. Cat mom in me of course responded.

Finally coaxed the kitten out from underneath and got him to come over to me on the steps of our friends place. He'd run up, get close and run away. Finally got him to come close enough to get sniffs and he finally let me scoop him up and tuck him into my coat.

Poor thing was skin and bones and shivering to his core (temps were in the 20s at that point and lots of snow on the ground). They also live right on the highway, so vehicles going by kept spooking him.

Our friends thought he might live nearby, but all the neighbors had gone for the holidays, so we brought him home until we could find out. After a few days with no one being able to contact any of the neighbors, and finding out that there had been no provisions left out for any outside kitties we decided that there was no way in hell he was going to go anywhere else if he wasn't being properly looked after.

So hubby named him Napoleon. Mostly because he was such a skinny, boney kitten when he arrived. When we first got him in he headed straight for the kitty crunchies without prompting (after encountering Phoebe of course. That didn't go as well as I would have liked, but pretty much as I thought it would) and tucked right in. He then inhaled an entire can of wet food: 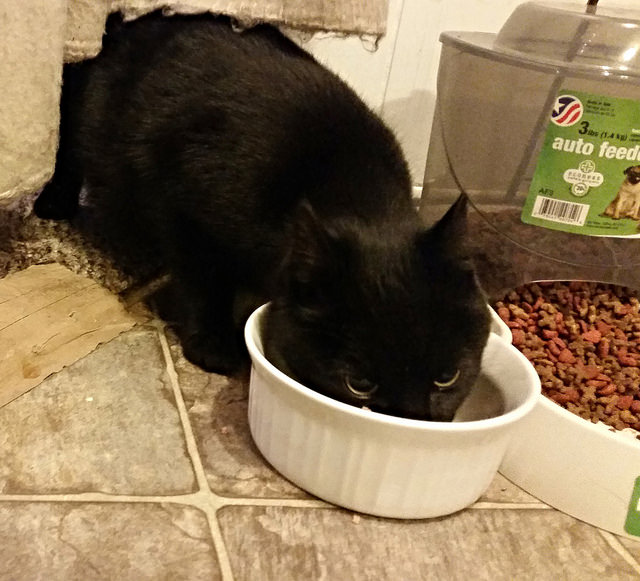 So he's been settling in nicely, tho he has decided mommy is a chew toy. He has VERY sharp teeth and we need to work on getting him used to having his claws trimmed. The girls are starting to get used to him, at least they aren't going batcrap crazy anymore when he gets close. Phoebe seems to almost be playing, tho she just may be trying to lull him in an attempt to get him close enough to pound the crap out of him.

Selena has seriously calmed down when he is around. For the most part she growls to let him know he is too close, tho lately it seems like it more for show: 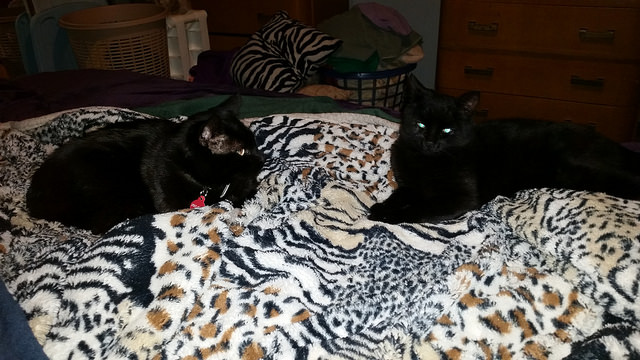 He was closer to her last night while she was up on the bed getting scritches from us last night and she was making more "these are MY scritches!" noises than anything before she got up and calmly stalked off. He'd been on his back wiggling as close as possible to her to try and get close. He really does want to be friends.

When he settles down is is a snuggle bug and loves to sit in laps, so that is nice as neither girl is much for that (tho Phoebe will occasionally decide she wants my lap. But that lasts only a short while). He's not too much of a snuggly kitty in bed, but then we go to bed about the time he really ramps up for nighttime mischief LOL!

PS: Rupert is a nickname simply because I refuse to shorten Napoleon to Nappy!

Awe, what a sweet story of you rescuing the hungry scared kitty cat. Those are precious pictures.

Sounds like Napoleon found a great home! You are a blessing to the feline community!

He has definitely landed in the lap of luxury, that is for sure.

Going to be fun getting more photos of him being cute. Can't wait to process all the video so far.

A handsome looking moggie. I do like black cats. Very nice of you to rescue the little guy

Good luck with Napoleon! As with all cats he will soon make clear his intentions to take over as much territory as possible!

He is a very handsome boy. This is the year of the black cat, at least at our house. Both the girls are black also.

Oh yeah. I just home my house can survive his attempts LOL! He'd pulled down part of the lights I had up in the bathroom and was making headway on one of my shelves. Luckily nothing breakable was knocked off (knock on wood!).