Food From the Compost Bin 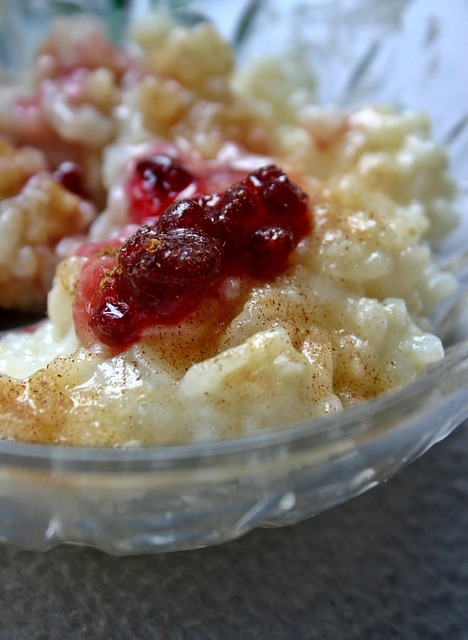 Nothing to Eat With It!

I decided to make a rice pudding last weekend. I had been considering making one for a few weeks but just hadn't got around to it. (That reminds me of a joke about round tuits - have you heard it?)

I think of rice pudding as a traditional sort of British dessert or pudding. My grandmother made it with 2 tablespoons of short grain rice, 2 tablespoons of sugar and a pint of milk put in a buttered oven proof dish and baked slowly in the oven at gas mark 2 (300 degrees F or 150 degrees C) for at least 2 hours, maybe longer, until a lovely golden brown skin formed on top and the rice was cooked. I generally put the rice and milk in a saucepan and boil it up before pouring it into the buttered oven dish and I then bake it in the oven at gas mark 4 (350 / 180) for about an hour, stirring half way through to ensure the rice is distributed and then reducing the temperature to gas mark 2 until ready.

We used to have puddings at every dinner when the children were small but now they are grown up, we seldom have dessert. My husband was surprised to find the pudding in the oven and asked what was with it. I had been brought up to consider rice pudding as a complete dessert in itself but he HAD to have something with it. I offered the old children's favourites of jam or honey but they would not do. He wanted stewed apples. I didn't have any apples and suggested he might like to walk up to the shops and get some. He walked out of the door and returned 2 minutes later with 3 large cooking apples. We have apple trees in the garden but the fruit was picked over a month ago, so i asked where he had got them from.

He had thrown some of the bruised apples on the compost heap, so he had retrieved them. He peeled and chopped them and stewed them up with some sugar. We all had rice pudding and stewed apples, except for my granddaughter who likes rice pudding BY ITSELF!

Helping yourself AND fellow PP writers

Sat in Bra and knickers in the front room!

I like rice pudding and there is nothing wrong with taking apples that need to be thrown and cutting away the bad and using the good. That is a good thing to do.

Sounds like a great dessert, I would want the apples with it too

thats not such a bad idea, at least the apples in the compost pile didnt go to waste

Funny. I'm a fan of good rice pudding, but not everyone makes a good pudding. I know someone who manages to make it taste like the vegetable! Blecch.

I haven't had rice pudding in a long time. Just looking at the picture makes me hungry. Thanks for sharing a great recipe.

I love rice pudding of all kinds even here in America.

I adore rice pudding and I adore stwed apple. I also prefer to use food rather than throw it out. Good on your husband for rescuing those apples and putting them to good use.

When I saw your title, my stomach tumbles down but upon reading the content of this article, it seems a delicious one to eat.

I liked rice pudding in itself,with no accompaniments. When I read the title I wondered what that was.Now I know.