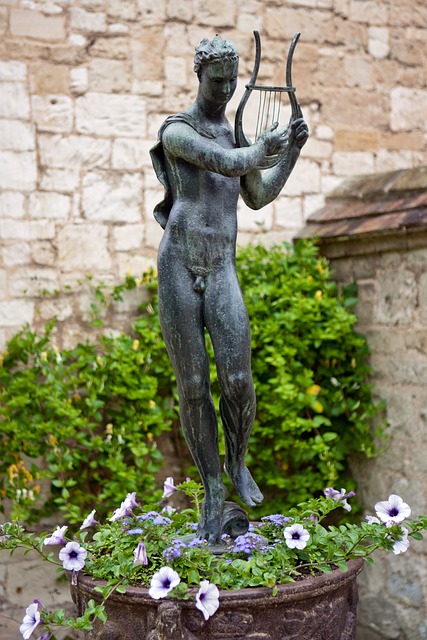 Every so often I try to dissect poetry from a tome titled World Poetry: An Anthology of Verse from Antiquity to Our Time . It does not skimp on the poetry, and happily includes from Africa, Asia, Oceania and the Americas as well as Europe and the Middle East. It does, however, skimp on context. While the editors provide a general introduction to the main divisions and some dates, they provide (stop me if you’ve heard this one before) no info on individual authors and no context for specific works. It’s been my grumble since page 1 and it’s likely I’ll continue to grumble about this until I finish the book. If I finish the book.

Today’s author is the Athenian tragic playwright Sophocles (497/6-406/5 BCE). Of some 120 plays he is reputed to have written, seven have survived to the present. Most people probably read his Antigone in high school or college. Choruses from three plays are offered in World Poetry : Oedipus at Kolonos , Philoctetes , and Antigone .

The first part of the chorus from Oedipus at Kolonos (Colonus)is a paean to the nearby city of Athens, remarking how the gods have blessed it:

O Lord Poseidon, you have doubly blessed us
with healing skills, on these roads first bestowing
the bit that gentles horses, the controlling
curb and the bridle,
and the carve, feathering oar that skims and dance
like the white nymphs of water, conferring mastery
of ocean roads, among the spume and wind-blown
prancing of stallions. (pp. 109-110)

The second part of the chorus asks:

What is unwisdom but the lusting after
Longevity: to be old and full of days! (p. 110)

It then goes on to list the frailties of old age ending:

[An old man] seems like a frail jetty facing North
Whose pilings the batter from all quarters:
From where the sun comes up, from where is sets,
From freezing boreal regions from below,
A whole winter of miseries now assails him,
Thrashes his sides and breaks over his head . (p. 110)

There are political interpretations as Athens, recently defeated by Sparta, is under the rule of the Thirty Tyrants at the time of the writing of the play. Nevertheless, short story is that Oedipus, he of legend who killed a man he didn’t realize was his father then married a woman he didn’t realize was his mother, is now an old man approaching death. He is accompanied by his two daughters, Antigone and Ismene, while his two sons, Polynices and Eteocles are getting ready to kill each other in battle. The playwright Sophocles wrote the play in old age. He did not live to see its production.

The next one, the chorus from Philoctetes is harder to place. Poor old Philoctetes. He was a great archer. Herakles—who is not mentioned in the excerpt—thought so highly him, he gave him his bow before he died. He shipped off with the Greek fleet when they sailed to Troy, but had the misfortune of being bitten by a serpent. Not only did he have a hard time walking with a painful wound, but the wound smelled bad. Odysseus dumped him off on the deserted islanded of Lemnos and left him there for 10 years. The gods told the Greeks they won’t win the war without Philoctetes and Herakles’ bow. So, how to get him to Troy with the bow? Not surprisingly, Philoctetes hates Odysseus.

he robbed or wronged no man
How can I understa nd him? I see
The waves of the years of his anguish
Break and break

The last and probably most familiar play is Antigone . Antigone is Oedipus’s daughter. In the timeline, Oedipus is dead. So are his two sons, Polynices and Eteocles, who killed each in battle. Creon has taken over Thebes, the city the brothers were fighting over, and has chosen to honor Eteocles and dishonor Polynices by leaving his corpse unburied. Anyone who buries Polynices does so under penalty of death. Antigone decides to go ahead and bury her brother, despite what Creon says. She happens to be engaged to Creon’s son, Haemon. Though Haemon argues for leniency, Creon won’t have any of that. Yeah, train wreck ahead. Greek tragedy. Everybody dies.

But you wouldn’t know any of this from the two choruses selected:

Blessed is he whose life has not tasted of evil.
When God has shaken a house, the winds of madness
Lash its breed till the breed is done.
Even do the deep-sea swell
Raked by wicked Thracian winds
Scours in its running the subaqueous darkness,
Churns the silt black form sea-bottom;
And the windy cliffs roar as they take its shock. (p. 111)

Numberless are the world’s wonders, but none
More wonderful than man; the storm-grey sea
Yields to his prows, the huge crests bear him high;
Earth, hold and inexhaustible, is graven
With shining furrows where his plows have gone
Year after year, the times labor of stallions. (p. 112)

Sounds awfully optimistic for a play that kills off so many of those wonders. But I digress. These are great to read. It’s some wonderful writing, but, as I’ve said so many times, without a context or without knowing the stories behind the poems, it diminishes the meaning and the beauty.

Wikipedia on Oedipus at Kolonos

Short Story review: "The King of Ypres" by John Buchan

I love that you introduce many of us to something that we have never explored. Thank you.

Great review, I think I must have a look at some of this, it sounds interesting and I enjoyed your excerpts.

On the contrary, thank you! It is a comment like yours that makes all the work that goes in to such a post worth it! (Hey, I'm not doing it for the money)

Thank you, MegL ! Your kind words made my day. I hope you enjoy some of his stuff if you read it.

I doubt that any of us are "doing it for the money"!

If we are, it would be pretty depressing

I think there are some that could be depressed with a million dollars because it's not a million and one, msiduri ! LOL

Oh, let me get the chance to be so depressed!

LOL Then I would be pissed off most of the time because family and friends would come out of the woodwork, after I haven't seen them for (literally) years. Screw that! I'll stay poor, and sane!

LOL! I hadn't thought of that. Oh, yes... the family who would show up at my door. Well, I might have to give them the address to my, you know, OTHER house.

Though much of the poetry and review went over my head,I enjoyed the the banter between CoralLevang and you, msiduri .

CalmGemini I try to keep things down and dirty. This was mild, compared to some of the banter between inertia4 or LoudMan and myself.

We aims to please, CalmGemini .

Well, you're the one with the dirty mind. I' m just enjoying it. 😄