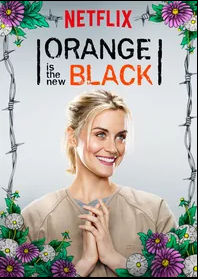 Mostly everyone who's watched the last two seasons has been waiting with bated breath for the third season of Orange is the New Black, and it actually was released early on Netflix last Thursday. I know there are a lot of people who watched the whole thing in one 13-hour go. I... do not have that kind of attention span. I finally finished the final episode this morning. My thoughts?

Well, I... was kind of underwhelmed, actually.

See, the first two seasons seemed to have a sort of structure to them. This one - I don't know. It never seemed like anything resolved. Maybe it was the point of everything, since the major problems with big corporations are pretty difficult to solve. But there were other plot points that never got tied up. Like, what about Sophia's kid? Michael seemed like such a nice kid but suddenly he becomes absolutely terrifying, and after that there's absolutely no followup. There's no real resolution to Coates, or to Dayanara's baby, or even to that awful romance thing Red and Healy had going on.

I actually liked Piper's storyline, which is a first, but I absolutely hated her scenes with Stella, played by Ruby Rose. I always hate plotlines that deal with cheating, and Piper was so very nonchalant about it. I felt bad for Alex, also a first. She'd just been gaslighted left and right, it seemed.

I also feel like they really hated Sophia this season. Suddenly her kid becomes a thug nearly overnight, and then she gets attacked and has to deal with some incredible amount of transmisogyny from everyone, then gets sent to solitary confinement indefinitely. It was really difficult to watch, and I really hope the next season helps tie up some of the loose ends there.

I hated Norma's and Red's storylines. I hate Healy, so that's mostly to do with the latter because I still love Red dearly. But I feel super uncomfortable with cults. Norma's backstory was sympathetic but it was seriously troubling that she was starting the same thing in the prison. And while Leanne certainly caused the most antagonism, Norma didn't stop her until someone almost died because of it. I really loved her before this season, too.

MVPs of the season are, oddly enough, a tie between the guards and Pennsatucky and Boo. I found the friendship that's been blooming since season two between Penn and Boo really heartwarming, and I love how supportive they are of each other, despite being so different from each other. And I was rooting for Caputo and the guards the whole way through, as they kept getting short-changed by the new corporation.

So, in short, I still like OITNB, but I feel like this season dragged considerably and was bogged down by plotlines that never had solid conclusions. Hoping the next season goes back to the same feel as the first two seasons.

Trying not to read too much of this as I've not seen any of it yet and hoping for a marathon soon!

PineMartens I hope you enjoy season three! I'm sure if you liked the previous two you'll still like this one, although it just seems to be lacking something.

I have never watched this show, but I keep hearing about it. I just may start watching Season 1 here soon.

I have never seen this show, but I have heard good things about it.

LeaPea2417 I highly recommend watching Orange is the New Black! The first season was wonderful, and you really get to care for the women in the prison. And the second season might have been even better than the first! Hopefully you'll be able to stop yourself from binge-watching, haha.