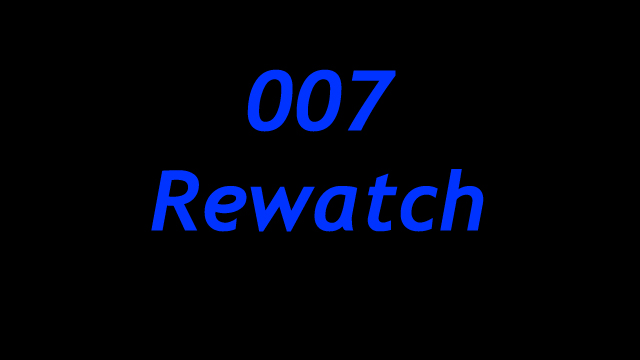 A couple of years ago when I started writing posts on a site that has since imploded, one of the things I discovered is that it’s a good idea to have posts in a series. This is where you write posts reviewing every episode of a TV show, for example. This is great because you can get dozens, if not hundreds, of posts from this one basic idea. And often, once you start such a project, you want to see it through so you keep writing your posts. So you end up writing lots of posts, which is basically the whole point of these sites. Of course, coming up with these types of series is easy, I have ideas for dozens. Actually getting around to starting them, that’s the hard part.

One series I’ve been thinking about lately is to review all of the James Bond movies. I remember in the early 90’s, various networks would have Bond marathons where they’d air all the Bond movies over a couple of days or a Bond movie every night for weeks. So I watched all the Bond movies, and I would rewatch them as often as I could. They were just … fun. Yes there were cheesy plots, but there were also explosions and scantily clad women. They were very interesting for a teenage boy.

But then I went to college and Pierce Brosnan started his run as Bond. There were still cheesy plots and explosions and scantily clad women, but I think I was starting to outgrow the cheesy plot aspect of Bond. The older Bonds I had only seen on TV, but now I seeing them on the big screen, and having to pay for them. I remained a Bond fan, but it was more nostalgic, if anything.

Then came the Daniel Craig Bond, which is more grounded with less cheese. So I returned to being a real Bond fan, without really thinking much of the classic Bond. I’ve seen all the movies, but there are some that I probably haven’t seen in twenty years.

I was thinking about all of this the other day when I saw something about Spectre , the new Bond movie that comes out in November. I did a quick check, and I realized that if I rewatch a little over one Bond movie a week, I’ll be writing up my thoughts on Skyfall when Spectre comes out. So that’s my goal. Twenty-three posts in about four months. Shouldn’t be too hard.

Writing posts about a series of shows or movies sounds like a great idea. I wish you luck in keeping up the 007 post-a-week.