What Part of No Don't You Understand? 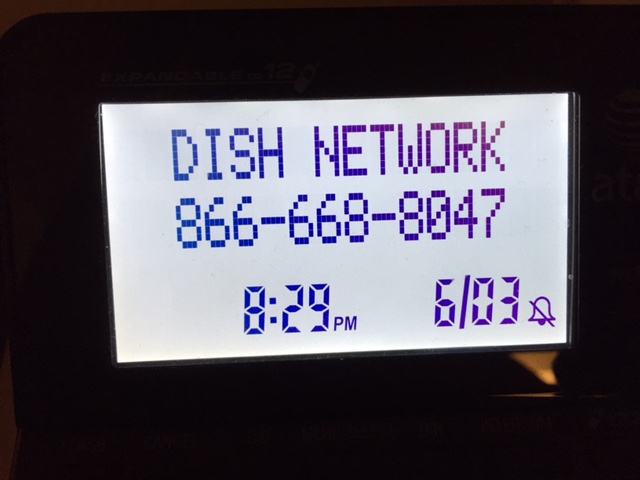 I never was a fan of Lorrie Morgan all that much (nor of her dad...in fact, the only person related to her that I do like is Keith Whitley), but she had a great song that asked, " What part of 'no' don't you understand? " I've been singing that to Dish Network tonight.

I earlier posted an article about Dish Network and how their high-pressure and argumentative tactics caused me to be late in getting something for my aunt. Well, guess what. They're at it again.

I checked my phone yesterday evening and noticed that Dish had called me.

I already articulated some previous issues with them, so I won't rehash them. A new one arose between my initial cancelation and the barrage of phone calls last night (which I thankfully missed because I have my phone turned off when I'm taking a nap). They double billed me for the early cancelation fee.

I'll let them feel the Better Business Bureau breathe down their neck over that. Meanwhile, I just have to sing along with Lorrie Morgan. What part of NO don't you understand, Dish?

Image Credit » One of Dish Network's four phone calls. Photo taken by and the property of Four Walls.

What's That I Hear? My Voice!

They are not the only firms doing that. All 3 of my (adult) children have had problems with their mobile phone contracts. I don't have a contract, I use Pay as You Go (PAYG) so I don't have to be bothered by them. Here in the UK, charity fund raising organisations are being lambasted for too many phone calls and for targeting elderly and vulnerable people. The charities use commercial phone calling organisations and they have been using their high powered sales tactics. Hopefully, the charities are going to stop using these organisations. But it's all big business now.

I saw Lorrie's dad a couple of times at the Grand Ole Opry in the late 60's and early 70's, but never really cared for him (I don't even have anything by him on my iPod! [I need to fix that because I have a Hall of Fame playlist and George is in the Hall of Fame.]).

There's another Lorrie song that I really like, "Watch Me." That was my theme song when I decided to quit a job: "if you don't think I'll go, watch me!"

Companies like that are like little kids who are throwing a tantrum because they're not getting their way, and they think that asking multiple times will wear you down enough to give them what they want.

I think you're right in that regard, but what they need to realize is that quite frequently has the OPPOSITE effect, especially with older people. (When I was little if I threw a temper tantrum I didn't get what I wanted, I got grounded!) Based on the way they've treated me the past month I wouldn't go back to Dish if they paid me $83 a month to have them! I'm trying to find someone to take their eyesore off my roof because I don't want anyone thinking I'm a customer.

My earlier article dealt with the fact that they are the third most "hated" company in the United States, and the way they treat former customers goes a long way in justifying Americans' disdain for them.

I really think that all big companies are like that...cable and dish and phone.