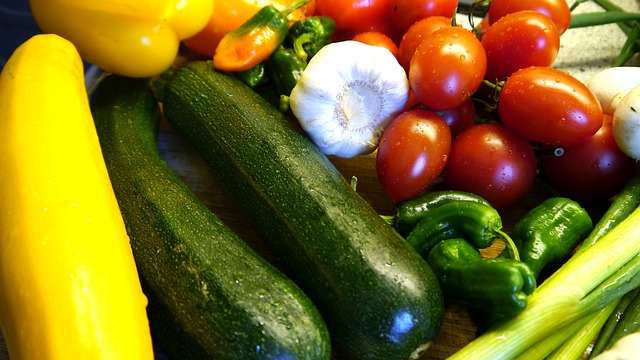 Zucchini aren't yet in season here in our valley, but I'm looking forward to that time towards the end of summer. I guess it's that my mother was showing off the long, thin zucchini she bought this week. She likes them that way, whereas I like the medium-sized ones so I have plenty for soups and pasta sauces. Anyway, she got me thinking about zucchini again lately.

Last year we got quite a few zucchinis from the fruit stand where k_mccormick2 was working for the summer. Usually the zucchini I buy are about six to eight inches long and maybe two inches in diameter. That's when their flavour is at its best. But these ones were ginormous! A single fruit was the size of a man's forearm. They were obviously left on the vine a little too long, as the seeds are almost large enough to plant.

I added a little zucchini to our suppers, but after several days I'd still only used just a portion of what we bought. So I figured I would shred some for making muffins and spice breads. I also decided to freeze a little of it for making soups or casseroles, later on in the season.

As it was my first time I'm freezing zucchini, I needed to learn what to do with it. I'd processed a ton of frozen carrots and beets prior to that, so it was fairly straight forward. I ended up shredding most of the zucchini for use in muffins and cakes. While I drained some of the squash really well before I froze it, some of it I just squeezed a bit and tossed into a freezer bag.

And I regretted not draining or blanching it afterwards! The thawed zucchini was just swimming in juices, which made it a lot tougher (and messier!) to bake with.

The National Center for Home Food Preservation recommends steam blanching shredded zucchini for one or two minutes, until they become translucent. I didn't try the steam blanching last summer, though I intend to this year. But I did do one batch of zucchini that I salted in order to draw off some of the juices. This definitely worked better than straight freezing! It just takes a spoonful of salt and about ten extra minutes. And the resultant juices – a sort of green, salty raw veggie broth – can be added to your soups. So there's no waste!

I think this year I'll try doing some zucchini that I've just salted and drained, and other batches that are steam blanched. I'll let you know how the two methods stack up against one another!

Did you know that zucchini is actually a plural word? The Italian singular is zucchino . The word literally means “little squash.” In he UK and France they are called courgettes , which has the same meaning.

Zucchini are fruits but we treat them like vegetables, much the same as tomatoes.

Note: This content has been adapted from an original piece by the author, which has since been removed from Bubblews

I like courgettes fried, never thought of freezing them.

I love using zucchini but never thought to freeze them. Here, for some reason, we call the huge ones marrows.

I love them in spaghetti sauce and soups, but we do occasionally just sautee them with a little garlic. Yum!!!

Yes indeed! "Marrow" isn't a term I've heard here, but I do encounter it online and in some gardening or cooking shows from abroad.

They can be rather bland, I'll admit! But a summer squash will soak up the flavours of other foods it's cooked with. So lots of garlic and onions, or a little touch of herbs, it generally enough to make it quite palatable.

I make bread with it is all that I do. Have some frozen yet from 2 years ago that I need to sort through. Some might go to the chickens

Many years ago, when I had time for gardening (before computers and the internet were available) I grew marrows in my garden one year. They get VERY big, like a double armload size and I thought I could use them stuffed, take out the seeds and bake them, etc. Well the marrows grew and I tried cooking them like a vegetable (cubed) but my husband didn't like them. And the marrows grew and grew and spread and spread and finally spread out onto the grass. I couldn't use them, we were fed up with them and I didn't lift them. The frost came in autumn and being so big and watery, they collapsed and left big mucky splodges on the lawn.

I am not a fan of zucchini.I treat it as one of the vegetables.I know the different names as I have come across them in cookery books.But I did not know that zucchini is a plural word.

I have never been a big fan of zucchini but over the past 12 months I have acquired the taste for them by grilling them on the BBQ ! Not half bad lol

I like your Fun Facts. Didn't know you could freeze shredded zucchini. Good tip!

I had no idea zucchini were fruits! I mean, it makes sense but I just had never thought about it I guess. We had a recipe years ago that was chocolate chip zucchini cake. Chocolate cake with chocolate chips and shredded zucchini. Not healthy at all but it hid the zucchini well. =)

I had no idea that zucchini are fruit! Nice info tidbit!