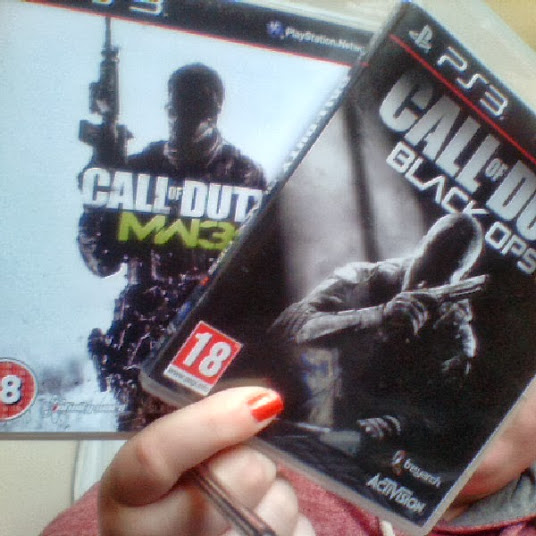 'Guilty pleasures'...We all have at least one. I know I have quite a few and I'm not ashamed to admit it! And I don't really like to call them 'guilty pleasures' anyway, because as long as you enjoy something, you should never feel bad about it!

My three absolute favourite things to do are singing, gaming and watching movies.

If you know me personally, you'll know that I'm a punk rock kinda chick. However I was flicking through the channels on television the other night and came across an advert that was using the 1987 hit song Nothing's Gonna Stop Us Now by Starship. I let out a tiny squeal and immediately started singing along. It makes me feel good and I will always pretty much sing anything and everything!

Usually, I play games like Call Of Duty (BO2 and MW3), Pokemon, Saints Row, Grand Theft Auto and Skyrim. But every now and again, you might find me playing The Sims or Animal Crossing, which are role playing games. Just something a little slower for a change.

And if I'm not singing or gaming, I'm usually watching a movie. Some of my favourites include the Lord Of The Rings trilogy, the Harry Potter series and of course, Star Wars. BUT, I am happy to admit that I both own AND watch the Twilight Saga and Stardust. And I'm not just talking once, I'm talking multiple times. To be honest, I have no idea how Twilight got such a bad name.

So don't judge people on whatever it is that they enjoy. Sometimes you have no clue how much one particular song, television show, film etc means to someone. I know from experience just how much one four minute song can remind me of people I have lost.

Now you know MY 'guilty pleasures', would you care to share YOURS?

Learning To Swim - The Fast Way

What Is The Best American Horror Story Season?

I love all 3 things you do to! :) I love to sing, well rap, even though I'm terrible at it. I love games, but I love movies the most out of all 3. I tend to watch a different movie every night, sometimes I watch 2-4 in a day depending on how much free time I have that day :)