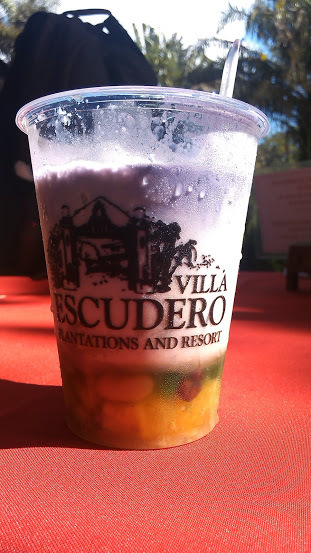 Read the first , second , third , and fourth part. This is the last part. Hopefully, you enjoyed reading it. Cheers!

We got out of bed late afternoon... so much for my morning plans. We showered, got dressed and went for a very late lunch... almost like a pm snack really. i wasn't bummed even though my morning plans didn't push through. At least I got to run... LOL!!!

I definitely had my fill of physical activity early part of the day up to the late afternoon... I'm not complaining though. After eating, we went ahead and went river rafting. Villa Escudero had bamboo rafts that can sit only two people. You are given a life vest each, wooden paddles, and you are on your own. They have adequate warnings at their make shift dock... 'River depth at 30 feet'... 'Non-swimmers are discouraged from taking part of this activity' ... good luck with that!!! When did a couple of warning signs stopped me from doing something? N-E-V-E-R-!!!

She was hesitant taking the river raft but I was persistent. We set off but I didn't want to venture out to far. We went in circles and then finally managed to get into a rhythm... two people swaying to one universal beat!!! After a couple of minutes, we decided to head back to the make-shift dock. It was an adventure... not that exciting but definitely different. Anyway, fishing came up next. We paid and got our make-shift bamboo fishing poles plus a piece of bread. What???!!! No live worms for bait!!! Anyway, this was another uneventful activity. We didn't caught any fish despite moving from one spot to another. At first we were at the make-shift dock, then we moved to the side of the restaurant by the river and then to another spot and then another and another. The talk though was great. We talked about everything and anything. One thing that she mentioned though was me moving from one spot to another. She said I didn't have the patience to stay still at one place... that I could never really be tied down to something... or someone... that I was always on the move... always leaving... always fleeting. She said that I am the one person who can be as steady and sturdy as an anchor in her life to keep her stable but I myself can't be counted on to stay in one place ... or be with one person... Seriously? All I want is to catch fish and I get this? LOL!

Anyway, the sun is finally setting and most of the two adult pools are under the shade. Time to take a dip in the pool. We pack the fishing pole and head back to our rooms to change into swimming gear. She was stunning in a two piece baby blue suit. I had my black board shorts and a matching black rash guard. We had the pool all by ourselves by early evening. We swam to our heart's delight and finally called it a night. We had dinner at the river side restaurant and then retired to our room. Did more swimming the third day but passed on another chance to go river rafting. I finally realized it was too risky even for my taste. LOL!

We went back in Manila first thing in the morning. Back to the daily grind. At least in those three days, we had bliss at Villa Escudero.