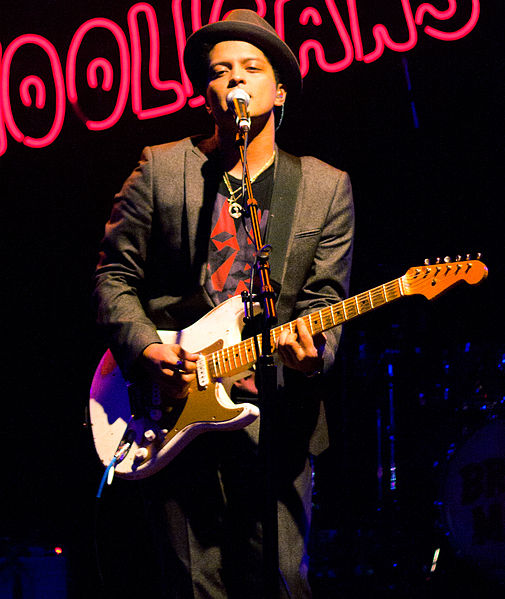 To jog my memory as to what was current on the radio three years ago, I decided to go to the website of Billboard Magazine, the official hit-list maker of the music industry. However, their website must have been designed by the same chowderheads that did healthcare.gov, because it was impossible to locate a comprehensive list for any given period for 2012. So I did what I should have done in the FIRST place, which was go to Wikipedia, my always-reliable font of information.

A glance at the list of top ten songs from 2012 reminded me of the song I was absolutely mad over, “Locked Out of Heaven” by Bruno Mars, which entered the Billboard Top 10 on November 10th, 2012, and peaked at Number One on December 22nd. I also adored the Glee version (sung by the Glee girls at that season’s prom). That was a song I would crank up any time it came on the radio.

Well, folks, I have come to the end of the 30-Day Song Challenge, but I love all kinds of music, and I like writing prompts, so I will be designing some of my own writing-prompt challenges pretty soon, including ANOTHER 30 days of songs, so stay tuned!

Listen to Locked out of Heaven

Day 30 - Your Favorite Song at This Time Last Year

Yeah, there has been some really catchy stuff out, lately. Bruno Mars is very talented, and I also like his more recent stuff with the retro feel.