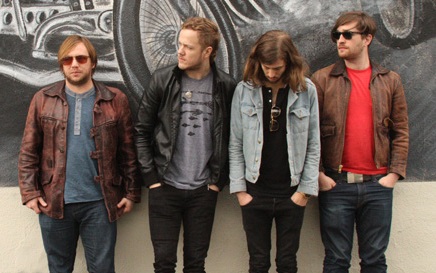 Last year, I really liked “Radioactive” by Imagine Dragons. It has a lot of power and emotion. It was performed in a “Battle Round” on NBC’s The Voice, and they did a pretty good job, but of course the original recording has the full sound you can’t get from a stage performance.

The interesting thing is that “Radioactive” is a song from a very popular video game, Assassin’s Creed III, and is also featured in a movie. It can be found on the soundtrack for The Host, a movie that was based on a novel written by Stephenie Meyer, the woman who did the Twilight series of books (you know, Edward and Bella). The Host isn’t about vampires; it’s a science fiction story set in the future, about an alien race that survives by taking over human (“host”) bodies. The humans are still alive, but they are powerless to act of their own free will. The aliens are more advanced, and they have made the world beautiful, clean, and efficient, and all people treat each other with respect. As nice as this sounds, the humans aren’t happy being prisoners in their own bodies.

I actually saw the movie, and it was okay, but I didn’t feel very moved or excited by it. Overall, it flopped, with a budget of $40 million and a gross of only $26 million. It was in theaters probably about six weeks. The song, on the other hand, was on the Billboard Hot 100 for over a year, and it is the third most-downloaded song of 2013. I’m not surprised, because it’s a great song!

30-Day Song Challenge, Day 29 - A Song from Your Childhood