Dog attacks - can we stop them? 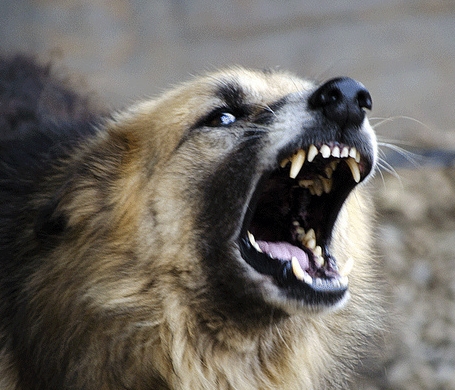 THERE WAS A report in my local media the other day of yet another child being attacked by a dog. The victim, a young girl was severely bitten.

This is just the most recent report of MANY INCIDENTS LIKE THIS . Children playing in a public park, their own garden or in the street are attacked and severely injured or killed by a dog. Sometimes more than one dog is involved and sometimes the dog's owner was with them but they were off the leash and free to roam.

Here in the UK there is a DANGEROUS DOGS ACT which forbids anyone owning certain breeds of so-called 'attack' dogs or 'fighting' dogs and certain other breeds must be muzzled in public but no legislation has been enacted on other types of dog not on the proscribed list but just as capable of carrying out a fatal attack.

How can you tell the difference between a dog which might attack a child and a dog which never will? YOU CAN’T! All dogs, even those whose owners trust implicitly and describe as ‘big softies’ are capable of turning and biting - through fear or provocation or some unknown canine reason - and if there is more than one dog present then the ‘pack mentality’ can take over, turning a quick snap into a sustained and severe attack.

I am aware that the problem isn't really the dog - it's the owner. Many owners take little interest in socialising their dogs properly or are the type of owner who simply cannot be described as 'responsible' and have a large, vicious-looking dog as a status symbol. They care nothing about the animal itself but only what 'street cred' it gains them and that situation is unlikely to change any time soon.

The HUFFINGTON POST (UK version) has an interesting article on this but the fact remains that there is only one way in which such attacks can be mitigated and that is by the simple passing of a law which states:

Passing this law would protect ourselves and our children from any potential attack by any dog. Owners who do not comply or who let their dogs stray should be dragged before a court of law and dealt with severely. This would put a stop to this type of attack but the potential danger of a dog attack would still remain in the home and on private property. Anyone who owns any breed of dog should seriously review their interactions with the dog, especially with regard to children.

And just in case those dog owners amongst you are wondering about my motives for writing this post I will state that I am an animal lover - but I love my children and grandchildren even more.

INTERESTING FACT: Did you know that the basenji dog breed doesn't bark? It yodels.

The 'Truth and Lie' writing game - my version!

I agree with you completely and am also a dog lover. Unfortunately, many of the attacks on children that I have read about here in the U.S. have been by family pets. Even in those cases, it has obviously been the fault of the adult owner. It is a dilemma.

Thanks for the interesting post, Kasman! I especially like the bit "INTERESTING FACT: Did you know that the basenji dog breed doesn't bark? It yodels." A strange but very interesting fact. I'd love to hear them yodel!

I have to say, I'm very nervous of all dogs, because of the horror stories we read about in the papers.

I am from the US and here I believe it is more the owners fault. Dogs are like children. If you don't teach them correct behaviors they will act out. Given, some dogs I agree may have fears of strangers or bad behaviors or fear their owner is in danger so they attack and in which case those should be muzzled or restrained to some degree.

SyddyHud - it is always the owner (or trainer) who is at fault but some people will continue to keep dogs for purposes which don't really match the requirements of a 'family dog'. The only solution is the one I propose in this post.

When my eldest son was about 4 years old and walking along the street with me, holding my hand, a dog darted out from a commercial yard and grabbed him by the elbow! Luckily it then just let go and ran back inside. This was nearly 40 years ago and the legislation was not in place. I complained to the police but nothing was done. It often takes tragedies before anyone will act on these matters. I also am a dog lover and we have kept a dog in the past, who was one of the family.

My experience has been that many dog bites on children could be prevented between thee parents and the dogs owner if that is a different person. I have had to stop children from teasing my dogs when people were visiting here. The parents should have been the ones doing that. I lost a sole on a horse one time because of that. But was happy to as the kids would have been teasing the horse never ending also. But owners when they are out need to keep complete control of the dog whether through training or a leash. But once again children need taught not to run up to strange dogs but to stand back and ask if it is safe to pet them.

My dog and I were attacked this winter by two dogs who go out of their pen. It was horrific! I was terrified. My little dog ended up needing surgery. I had bites on my arm. Thankfully Animal Control was all over it. The owners even paid all the medical bills. Still very scary!

I was bitten by a chihuahua in a dog show. The owner admitted that her dog was vicious. I accepted her apology since she gave me her phone number so in case I have a problem. But that was a neat lesson to me - be careful of dogs which you do not know.

I agree, there are certain breeds best suited to family life, especially when young children are involved. I usually tend to blame the dog owner more than the dog when a dog misbehaves or worse, causes a tragedy. I wish more people were responsible pet owners.