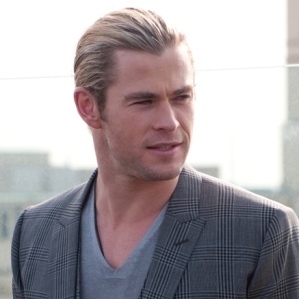 Thor: The Dark World was everything I wanted it to be. Powerful-but-sensitive Thor (Chris Hemsworth) and his cadre of bantering badass friends; his wise mother (Rene Russo) and stubborn, powerful father (Anthony Hopkins); the sweet and brainy Jane Foster (Natalie Portman); the silly yet fearless Darcy (Kat Dennings); the more-naked-than-usual Erik Selvig (played by Stellan Skarsgård, who happens to be the father of Alexander Skarsgård, who plays the tall, striking blond vampire Eric Northman in HBO's True Blood series), and the ever-scheming evil prince, Loki, played masterfully by Tom Hiddleston, whom I saw on the Chelsea Lately talk show and found to be quite charming and very intelligent, as he can read Cyrillic and apparently speaks Russian. Well-played, Sir!

So, uh, back to the movie. As I said, all the old favorites from the first movie are there, including Heimdall, (Idris Elba) the wise guardian of the Bifrost bridge, with a compelling storyline--dark elves are returning to destroy the universe as we know it, so there's a race-against-time element, complete with cosmic alignments and singularities and whatnot for the geeky non-super-powered scientists to help with. There are some twists and turns to make it even more exciting--Thor has to work with Loki to defeat the menace of the dark elves, but Loki always has his own agenda!

There are some great cameos, too--Stan Lee shows up, as always (I won't tell you when--spotting him is the fun part!), and watch for another person we know and like while Loki and Thor are walking through the palace in Asgard. Special effects are just as amazing as you would imagine--the design of the buildings in Asgard and the dark elves' fighters are particularly impressive--although it led me to the understandably head-scratching question--if these folks have SPACESHIPS and FIGHTER JETS (and the elves also have ray guns and space-warping grenades!!!), then why do they fight with SWORDS? Norse mythology and sci-fi are kind of hard to reconcile.

This movie has a runtime just shy of two hours, so it's nice and tightly-paced. As always, remember to stick around through the closing credits for the extra scene, which is very, very weird, but is no doubt setting the stage for Avengers 3. Enjoy!

Picture of Chris Hemsworth by Mikhail Popov on Wikimedia Commons

In Pursuit of Smoothness

The Ridiculousness of Spam

I think Thor is one of the better comic superhero movie franchises. The first one Thor was good and this is a fine sequel. Loki is a terrific villain as evidenced by their appearance in The Avengers.

I saw the film and did not care much for it. Well, except the parts where there were half-dressed male hotties.

Hmmm...good questions Earthling. Is this a recent movie? I'm afraid that while I'm familiar with Thor as a mythical character, I'm not familiar with the movie.