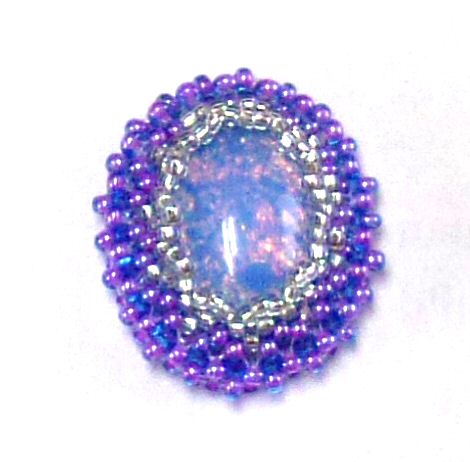 Well it's been a long week and I haven't been around much to do anything but comment on a few posts. I've been working on a new idea for bezeling a cab. I love CRAW (cubic right angle weave) ropes, but they are too big and need a lot of embellishment to make the suitable for a bezel. Heather Collin , who introduced me to single needle CRAW had mentioned tri-RAW in a facebook post and I could immediately see it as a bezel.

The blue opal cab shown is 20mmX14mm and the main trouble I had was forming the rope into a circle. Had a little trouble invisioning the stitch using existing beads from the start end. I also didn't keep the tension tight enough and have some thread showing, which is simply unexceptable, but I think it looks like an Easter egg.

I'm going to put 2mm crystals around the edge . . .if my order ever arrives. It left Medford, OR at 3 pm on March 3rd and there's been no update since. It should have arrived in Lubbock on the 4th, but we had an ice storm. No planes in or out for 24 hours or so. The plane seems to have been diverted to another airport and disappeared into limbo. I'll be calling the company if my order doesn't arrive in a couple more days.

You seem so talented. What an interesting and fun creative hobby.

That is very pretty and it does look like an Easter Egg.

awesome art, you sure are talented

Thank you. I've done needle work all my life, but always with patterns created by others. Bead weaving is the first hobby I've ever had that sparked my creativity.

Thank you. Sometimes designs turn out to me much more than I had imagined.

Thank you. It's always flattering to be praised. :)