30-Day Song Challenge, Day 13 - A Song that is a Guilty Pleasure 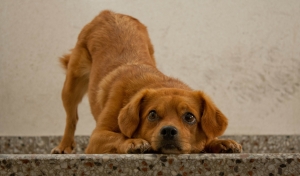 Okay, I’m embarrassed to admit it, but I like Paris Hilton’s album. She’s a ridiculous human being, but she’s not a horrible singer, and it’s my kind of music--what can I say? Of course, I have a fondness for any remake of my all-time favorite song , Rod Stewart’s “Da Ya Think I’m Sexy?” (which, happily, is spell-checked to “Do You Think I’m Sexy?” on her CD), but my actual favorite song from that CD was the single, “Stars Are Blind”.

It’s a light, poppy, reggae-infused ditty that kind of lilts along. It’s pure bubble gum, sunny-summer-day type music, and that is reinforced by the video, which is basically Paris pretending she’s pretty enough to be a model, rolling around in the surf in a teeny bikini while a photographer devotedly shoots away. Oh, having a rich daddy is great, isn’t it?

Listen to Stars Are Blind

I've included a picture of a guilty-looking dog because there are already plenty of pictures of Paris Hilton.

I must say, the dog photo was a clever idea.

OMG, I think you just won the challenge, hands down! I'd feel guilty about that one, too! (And kudos to you for having the cajones to admit to something so horrifying!)

I cannot say that I share your guilty pleasure, but I do appreciate that I am learning more about other songs I would not give a listen to otherwise.

Thank you, thank you very much (you just read that in Elvis's voice)

As if that weren't hilaribad enough, I actually ordered the damn thing from Columbia House. Oh, the shame!

Maybe Paris Hilton and Nelly will do a duet and we can go to their concert wearing wigs and fake noses.

You're on, Babycakes!! *laughs* Let's meet up in Austin, TX for that one.