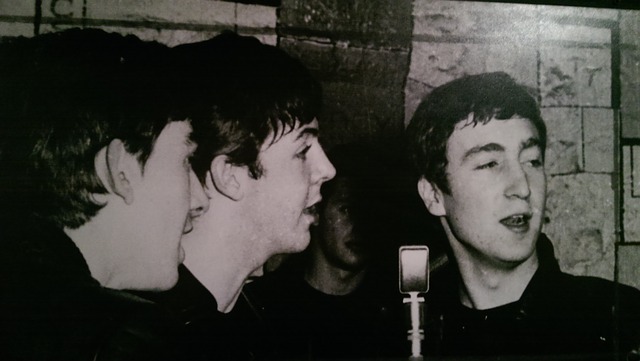 I guess you could call this a 30DaySongChallenge extra. I was reading this post by alexdg1 for his entry for today in the Challenge http://personapaper.com/article/26213-alicanarys-30-day-music-challenge-day-six-a-song-from-your-favorite-band-eleanor-rigby , and I left a comment about the song, with its dark themes of loneliness and death and its brooding music, was kind of creepy.

But as soon as I mentioned that, I thought, "And yet, that song is not the creepiest Beatles song, by far."

An Even Creepier Song

There is a song that is by far creepier than that, called "Maxwell's Silver Hammer". The song is about a medical student who is basically a serial killer, murdering people by bludgeoning them with a hammer. What's more creepy than the subject matter is that the lyrics are set to an upbeat tune, and everything is treated as giddy little romp:

Bang, bang, Maxwell's silver hammer came down upon her head;

Bang bang, Maxwell's silver hammer made sure that she was dead

Jeez, at least "Eleanor Rigby"'s music is somber and gives one a bit of a warning that the song isn't about a cheerful subject. But hey, peppy and industrious serial killer Maxwell isn't even the worst character The Beatles invented.

The Creepiest Beatles Song Ever

That honor goes to the guy singing "Run for Your Life", another Beatles song disguised as good-time rock, until you actually consider the lyrics:

You better run for your life if you can, little girl

Hide your head in the sand, little girl

Catch you with another man, that's the end, little girl

Um, yeah. And just i case you thought "the end" might just mean the end of the relationship, No . The first two lines of the song make that plain:

Well, I'd rather see you dead, little girl

Than to be with another man

The reason I think this is even creepier than the song about the med student who shyly asks a girl on a date so that he can smash her skull in is that "Maxwell's Silver Hammer" is still a pretty fanciful situation, and the ruthlessly possessive and violent guy in "Run for Your Life' is all too real to hundreds of thousands of women who have been stalked, and sometimes attacked and even killed by a jealous, abusive, obsessed ex-lover. For the Beatles to couch this as a fairly light-hearted pop song really did a disservice to the subject of violent domestic abuse and stalking. The singer talks about a woman he supposedly loves, but it's clear he knows nothing of love, only fear and control.

To me, that's not just creepy, it's horrifying.

30-Day Song Challenge, Day 13 - A Song that is a Guilty Pleasure

I think you could be right there. There are some pretty creepy songs hidden in jaunty lyrics at times. Consider also Driva Man by Max Roach, the tale of slaves picking cotton overseen by a bullying gangmaster who would beat them as quick as wink. I saw a performance of that once where the singer actually cracked a bullwhip right on stage. Those things are NASTY!

Quite often I separate the music from the lyrics. It's a catchy sound but I hate the words! My husband will rewrite a song entirely of he likes the music. But I agree with you. That's a creepy and very real song.

They were before my time and I dont think I have heard any of those but that is some creepy lyrics.

Oh dear! Naughty Paulie ! It must have been before sweet Linda's influence( not having John blamed)...

"The dark side of the Force" must have been twisting Lennon-McCartney's souls when they were writing those creepy songs.

I've never heard either of those songs....and now, I don't want to!

Helter Skelter...the song is not creepy but what it represented after the Manson family finished with it...

I think that they're creepy NOW. They were innocent back then (well, except for "Maxwell's Silver Hammer," but in reality that wasn't any worse than "Knoxville Girl" or "On the Banks of the Ohio"). It's like all those songs with crushes on 16-year-old girls in the lyrics sounded so cheery and upbeat back then ("You're 16," "Happy Birthday Sweet 16," "Sixteen Candles," etc.) and sound like a bunch dirty old perverts now.

So true--it's actually about a slide at an amusement park! Who knew THAT was gonna end up so bent out of shape?

"Revolution 9" has always creeped me out.

It just confused me. I find it tedious and pretentious now. 'Scuse me. Gotta go chase some g*dd*mn kids off my lawn.