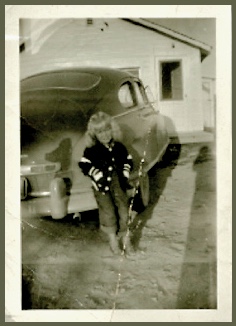 When I was almost four years old we moved to St-Georges, a French-speaking village in Manitoba. (We had recently moved back to Canada after a year and a half in Los Angeles where I had been misdiagnosed with diabetes after gobbling a few bananas sprinkled with sugar. My despairing parents decided to head back home to Winnipeg before they learned that I was actually okay…)

My Grandpa Charlie, a superintendent for the Foundation Company of Canada, invited my dad - a skilled carpenter - to join him and his crew to work on the new Pine Falls dam and powerhouse being constructed on the Winnipeg River. By the time Daddy got there, all available housing was occupied, so he talked a family - the Harbottles - into letting him turn their no-longer-used tractor garage into a house for his small family. At his cost.

In a couple of months, with the help of new friends from “the job”, he had readied a little abode for us sporting two tiny bedrooms. These days the layout would be considered “open concept” but then it was strange not to have a separate kitchen. But my dad was over-the-moon to have us with him again, and as glad to be off his father’s and stepmother’s couch as my mom and I were to be leaving behind her parents' lumpy old convertible sofa!

My mother tackled the place, creating a pretty, tastefully decorated little home, albeit one with with weak and wavering electricity and no plumbing. She had to haul water from an old pump that thankfully still worked. Needed for cooking, cleaning and sponge-bathing, it was heated on an ancient wood stove that served both for making meals and warmth in winter. …And summer... For refrigeration, an equally old icebox sat across from the stove. Big chunks of ice were delivered a couple of times a week, so I guess we weren't the only ones who hadn't made it into modern times. Mom also kept a large store of candles for when our lights just flat-out failed. Those were sad times because the radio - otherwise constantly playing - failed as well.

A long-neglected outhouse languished between the Harbottle’s and our place, which my mom painted inside and out. An artist, she also illustrated realistic flowers on the inner walls, making our privy almost inviting. A feeble and flickering light kept it lit at night though we rarely used it then since my dad had built a little indoor cubby enclosing a camp toilet. Unfortunately, that had to be emptied every morning -- yet another extra job for my mom — as well as shoveling snow in the winter and cleaning the ice off the windows of my father’s car, all before he left for work AND after she had prepared a bountiful breakfast while looking like she stepped out of a fashion mag! (He was twelve years older and one of those catered-to husbands like her own father…) Women’s work back then generally included back-breaking chores at home while the bread-winning men expected to sit back and relax when they weren’t “on the job”. At least, so it was for most of the construction families I knew growing up. (Though I always adored him, I swore I would never marry a man like my father, and I didn’t!)

In the mornings, I would stand on my little bed and look out the window to watch the cows amble into the meadow next door, lowing softly, happy after milking - then make attempts to draw them. (I’ve loved cows for models ever since, and painted many.) Behind our erstwhile garage was a tall wooden fence separating us from an endless cornfield and constant cawing. I can almost smell the clover-scented air right now.

I had such wonderful adventures living there and my mother said the same, despite all the extra work required of her in that place…

The photos are of me in front of the make-shift house with my dad's Nash and a painting I did of a French Charolais cow. 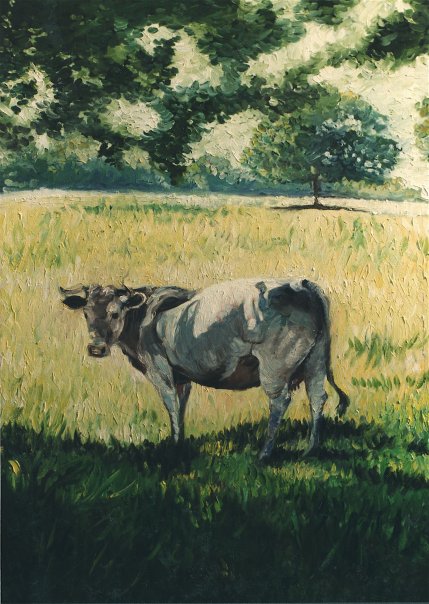 That's a very good painting of a cow and it sounds as if you had a colourful upbringing!

Thank you! And yes, I did, and now I think I will enjoy writing about it!

That must have been a real change for you considering that you have such vivid memories of that place. Vastness is history now.

Weirdly, I just used Google Earth and Google maps to check out some of the places I've lived. Some are still villages and seem to be stuck in time. One in New Brunswick has a population of just over five hundred. And the vastness is still intact. I guess after the dams or bridges or whatever were completed, all the workers moved away with their families and everything went back to normal and stayed that way!

Wow that was cool! I think you had a great time even though a lot of things is happening when you are young.. God bless. I wish I could paint that nice too... I paint but not as if I am a professional... yours is Superb. God bless.

Thank you! In fact I worked as a professional artist/illustrator for many years...

My family lived in New Brunswick after the dam was activated. Many older people in the province despaired at the valley farm lands that were taken and ended up under water. Progress marched on.....

As a result of the Beechwood dam? Other dams were built. i think this dam was another power plant. I don't recall any farm lands being compromised in that area...

Imagine painting flowers inside the outhouse! It sounds like your mother was a special kind of woman