Tablet Computer Sales Are Down 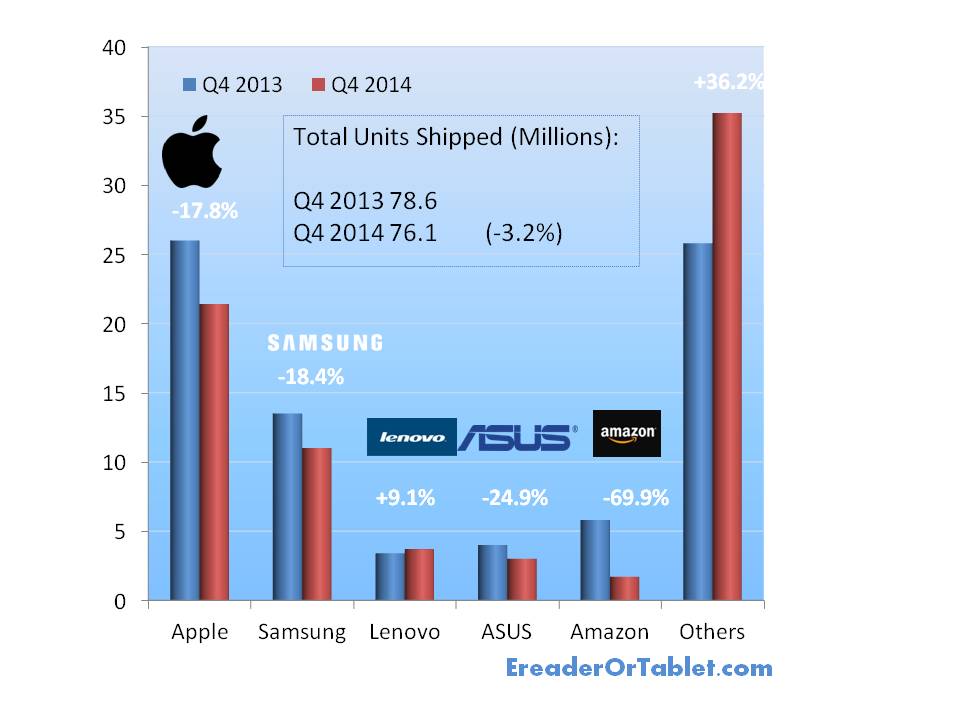 Tablet computers are very popular these days. They have been selling better than both laptop and desktop machines combined and, for many people, they are the first choice when they are looking to buy a new computer.

It's an incredible success story, especially when you consider that the original Apple iPad, which started the ball rolling, first appeared as recently as April 2010. However, last year, in the important run up to Christmas, tablet computer sales fell for the first time.

Samsung, Asus, Amazon and even Apple, all shipped fewer units in the last quarter of 2014 than they did in the same period of 2013. The only one of the big five to show growth was Lenovo - and that result is being attributed to the fact that many of Lenovo's customers are in Asia, where market penetration is lower than the USA and Europe.

And that's probably the reason for slowing sales. Market penetration is high in North America and Europe. Many sales in those countries will now be upgrades or other replacements of existing tablets - something which is much more discretionary and which can always be delayed if money is tight or required for other purchases.

Some of those other purchases may also be attributed to the sale of different products - some of which will be made by the tablet computer vendors themselves. For example, Apple's falling tablet sales can, in part at least, be attributed to "corporate cannibalism". Some consumers are buying larger iPhones instead of an iPad Mini. At the other end of the scale, some consumers are going for Macbooks instead of the iPad Air. Either way, Apple still gets its slice of the consumer pie, so they're not too worried.

Tablet sales are down mainly due to market penetration. It's not all doom and gloom for the manufacturers and, more importantly, for the consumers.

I've wanted to get a tablet for a while, but as I have an iphone and a laptop, I just can't justify it!

I've actually thinking of getting a new phone but a tablet and phone package being offered by Lenovo is too tempting to pass up.

They tend to break down, burn out or get damaged easily for being carried around a lot