Hit and Run Crime at the Laundromat! 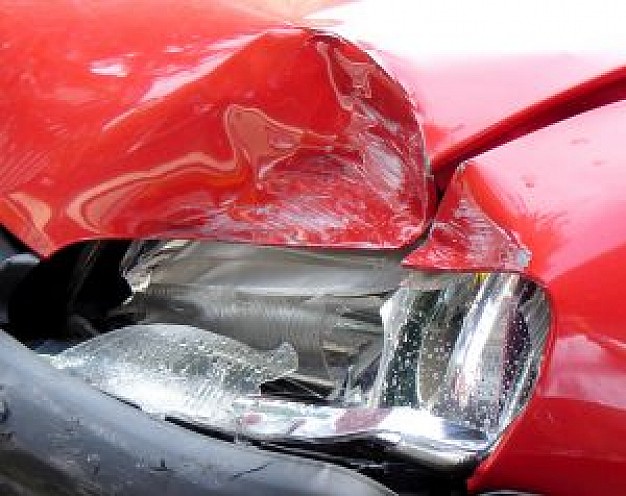 In Part Three of my "washing machine saga", http://personapaper.com/article/24544-can-you-believe-another-washing-machine-broke , the story of the broken washing machine continued when I found out yet ANOTHER washing machine that I thought I could use had its own issues, and therefore I was obliged to go to the laundromat, which I had been trying to avoid doing, even though it is quite nearby my house. I left the afghans hanging to dry at the little house and took the load of clothes to the laundromat near my neighborhood.

When I got there, I parked facing the front of the laundromat, put my sunshade over the windshield, and started getting quarters out of my change holder in the car. I could see around the side of the sunshade, and during the few minutes I was sitting in the car, getting quarters together, I saw a taxicab pull up to the front of the laundromat. When he pulled into a parking space, he cut too closely next to a red car that was parked there, and he scraped the back corner of the red car REALLY badly.

As soon as I saw this happen, I felt like I should start writing things down. I always carry a pen in my car, and I happened to have some mail that I just picked up, so I grabbed an envelope and started writing on the back. I wrote down the license plate number, the vehicle's company number, the name and phone number of the taxi company that was on the door, and even a description of the driver.

How did I get a description of the driver? Because when he hit the car, he got out and walked around and looked and saw all the damage he had caused, and then he backed out, scraping the red car even WORSE, and he drove away! He should have gone inside and found the owner of the red car, apologized and given insurance information, but clearly he was afraid he would lose his job. So instead of reporting the accident, he committed a crime by fleeing the scene.

But he didn't know I was sitting right there, watching the whole thing.

I had my quarters by then, so I walked into the laundromat. There were a couple of African ladies sitting near the door, and I asked if they owned the red car. One of them said yes, so I said, “I have some bad news, but I have some good news. The bad news is that a taxi just came here and scraped the hell out of your car.” I let her absorb that for a second. “The good news is that I saw the whole thing and wrote it all down,” I continued.

So we called the police to come because I could be a witness and give them all the information. The ladies were upset to see that the car was hit, but the owner was relieved and happy that I could help, and she thanked me over and over and gave me a big hug. I told her I was only there because my washing machine at home broke, but my bad luck was her good luck, since I was there to help when she needed it!

The policeman who showed up was very cool, and he was impressed by all the information I'd gathered. It was everything he needed, he said, and he called the cab company. They made the driver return to the scene, and the owner of the cab company came, too. I doubt that guy still has a job, and now he probably has a very expensive ticket to pay, as well.

I actually got my laundry done, too!

Stupid Things that Always Happen in Movies and TV Shows, Item #2 -- I Really, Really, REALLY Will Shoot You

Well done you. Getting body work put right is an expensive business, now at least the ladies will be able to claim their money back.

If you ever get fed up writing on the net you could start a new career as a private detective! Good job.

That's what BarbRad was saying earlier about divine appointments. You happened to be there at the right time to use your writing and observation skills to help these ladies out. By the sounds of it, otherwise they'd have been out of pocket on car repair bills.

I am sure all that you went through with your washing was worth it after all though in a round about way.

Oh my! It all seems a lot of drama just to wash some clothes, but I am glad you were on the ball and got all the relevant information so the cab driver did not get away with it.

Whew! Thought it was your car at first. Good for you! You saved that lady an awful shock.

Wow, it looks like seeing a movie in the street. It must be exciting.

Wow, you can add yet another hat to your list -- you are not only a good citizen but a detective as well. Life is funny, isn't it, in it's ebb and flow?

That was a brilliant ending, the fact that the cab-driver had to face up to his negligence-some driver! You were worth your weight in gold that day...

Your life seems central on washing machine. I think you can turn this into a horror story.

I despise people who won't take responsibility for their own actions..

That is great that you were there at the right time. Now you know why the washing machines kept breaking down. I simply carry my camera at all times anymore in case of something happening

A crime solved and the laundry done is the way to rock a bad day. So glad you got this event settled.

And Justice will be SERVED! Nicely done!

I'm glad your string of bad luck came in handy and you were able to turn it all around!

What an awful thing for the taxi driver to do!
I am glad you were there to report it all.

AliCanary P.I. Good job you did there, the world would be a lot different if we all do what you did. I am sure at that moment the broken washing machine wasn't of the least importance. Well done and thanks for sharing!