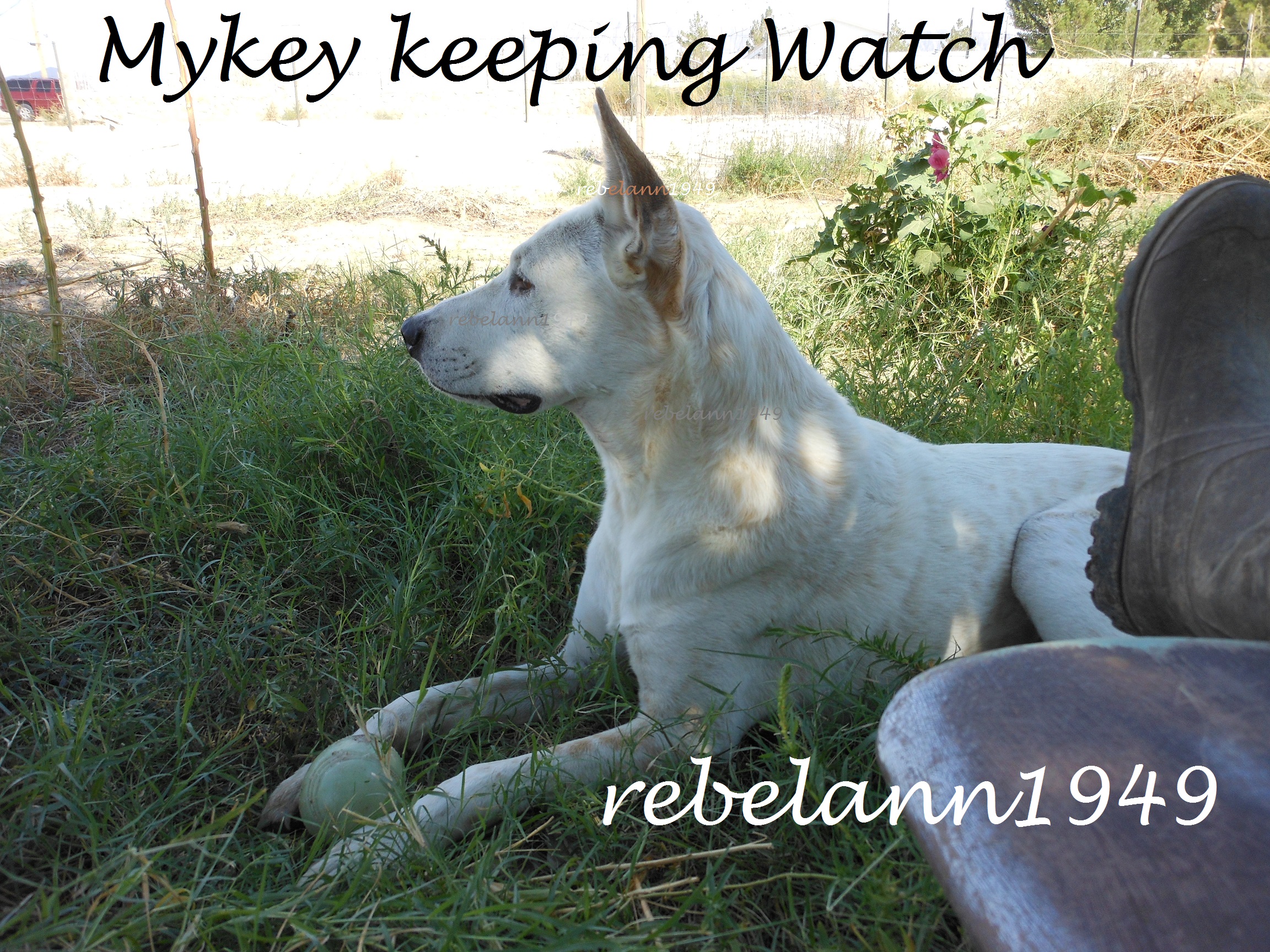 Good afternoon everyone, I am back to share a picture I took. This one is of Mykey while he is keeping watch for intruders of our street or perhaps a mouse to chase. It was taken in September of 2012 and he was still quite active back then at only nine years old and could give Ally a good run for the money.

Just look at those ears, it made him look so handsome, don't you think?

In the last two years both those ears have been stung by something. The first time I made the mistake of taking him to a vet and let them operate on his ear. Well, for the over $300 I paid for that all I can say is how stupid was I, she ruined his delicate ear.

Then not long after I took that horrendous cone off my boy he was back to hunting and got stung on his other ear. Cheeze, I'm not sure if I could have prevented this but I would have thought he would be more careful where he stuck his head. Well, this time I did not take him to a vet, I had read that most dogs usually can heal from most insect bites if given enough time and sure enough he has healed, but that ear also droops, poor Mykey now has droopy ears.

He will be 12 this year and I can tell he has aged a lot, his energy is low these days and he no longer likes to chase Ally. I think he is in fairly good health all things considered but his main occupation these days is napping. I suppose that is normal, if the scale of dog years to human years is correct then he would be about 84 or so years old. Yeah, many 84 year olds do a lot of napping and if possible do a little running.

We love this old pup, I worry about Ally when he has to move on and I know I will be heart broken again just like I was when the others moved on.

Ok, that was just a little about my eldest 4legger, I have tons of pictures I want to share so I am going to go through them all to see which ones I want to share and tell you about, many are of my past 4leggers but those require that I don't cry so they are not as easy to write about.

Image Credit » I took this picture myself of my dog Mykey in 2012.

Mykey is a handsome fella. I just don't know what it is about vets. They charge a fortune these days. I am glad you take such good care of Mykey though. I am sure he appreciates it very much. If I were his age I would nap most of the time too.

He is very good looking. Hope you have many more years with him yet.

I am glad to see you here, we miss you on BB.

Thank you for the sentiment but I'll be happy if he lives another 3 or 4 years without any health issues, guess I'll soon see if that is possible.

Wow that old?! Anyway I never heard about dog who stung in the ears. Maybe because of the different environment that we have. God bless and I hope he will get better as he got old. Take care.

Thank you for your sentiment. As for his age, I hope he will live at least a few more years, he is healthy so I don't think it is an unreasonable hope.

Older and wiser. It is sad to see them slow down though.