Tour of a the USS Iowa 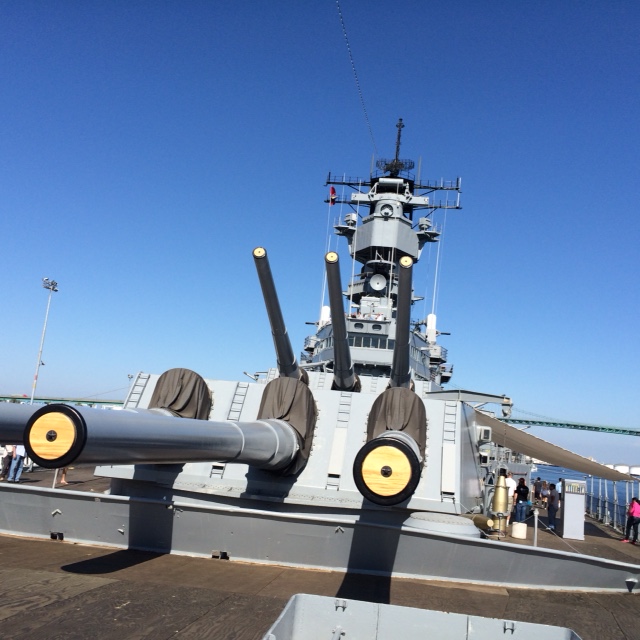 This past Sunday, Mr. Siduri and I toured the decommissioned USS Iowa , a World War II era battleship docked at Port of Los Angeles that now serves as a museum.

About five levels are open, including the captain’s and officers’ quarters. In one of these, some wit had placed a game of Battleship. We also walked through mess halls and were granted some access to the wheelhouse. There’s a lot of crawling up and down narrow, steep stairways and you do have to pick your feet up when going from room to room. One in not inside for extend periods of time, though, and there are benches to sit on. Restrooms (as opposed to “heads”) are also provided.

The brochure warns that the site is not currently ADA accessible. Understandable. None of the innards of the ship—the engine room, for example—are open, but again, that’s only reasonable. While I with my statuesque 5’ 2” height had no problem walking around, I imagine taller folk may have to duck now and again as there were obstructions in the ceilings and walls at odd and unexpected places.

According to the brochure, the Iowa carried no less a personage that President Franklin Roosevelt and his War Cabinet to then secret meetings with Joseph Stalin and Winston Churchill in 1943 to Tehran, a precursor to the Yalta agreements. According to a map on the wall, it saw action in the Pacific, specifically in 1944 at Kwajalein, where, sometime later, I happened to have spent a year as a kid.

The Iowa also saw service during the Korean War, during the Cold War and after. It was decommission for the last time in August 1994.

The guns and some mock-up ordinance, including a cruise missile—which was much smaller than I expected—are on display.

All in all, this was educational and interesting, if tinged with sadness.

Open every day, except Thanksgiving and Christmas.

Image Credit » Image is mine

Tour of a Decommissioned Blimp Hangar

One of my ultimate dream is to visit a navy carrier just like what you have visited.

I hope you get that chance. This was a battleship, but not a carrier, though. It was moving in many ways. Are you military or ex-military?

thanks for the correction. Actually i am not a military nor an ex-military. I am just a fan of battleship and carriers.

I hope you get the chance to tour a ship soon. It really is interesting.

We get to see a bit of all what was used in wars, in war movies which I have thoroughly enjoyed.

They are, aren't they? And even if these old knees has a bit of time climbing up and down the ladders, I'd go again.

It is interesting, isn't it? If only it weren't necessary.