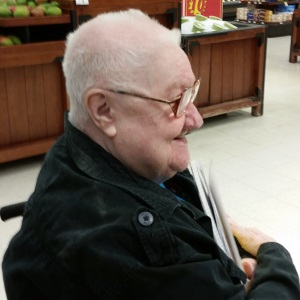 Who could have known that a trip to the grocery store could be so exciting and so uplifting.

Usually, it is just a matter of getting into the car and driving down to the store with a list and pow, knock out the list and get back home. But this day, this Thursday was to be different. This Thursday my mother requested that she come with my brother and myself.

To the average person this wouldn't be a big thing. To myself and my family, however, it was shocking and very earth shattering. See, my Mother suffers from a social panic disorder than many doctors do not even understand. She has severe agorophobia. She is terrified of stepping out of her "safe space". Presently her wide safe space is the townhome we live in. Her intimate safe place is her room, which I can seldom get her to leave. So when she asked if she could come with us, we jumped and got everything ready to go.

Needless to say as we made sure the car was where she could get into easily, getting her dressed and making sure she had her wheelchair, she was trying to suddenly find excuses. We simply hugged her up and told her there was no getting out of it and that she would be safe. We would be with her every step of the way.

Now understand, she hasn't been out of the house, with the exception of going to her doctor's visits for almost 10 years. So the drive to the grocery store, less than a mile away was even new to her. She giggled like a child and pointed at the various places that were around us.

We spent around an hour in the store, letting her see items she had never thought would be in a grocery store (such as ready made salads and pre-cut veggies for soups). We made sure she was able to pick out snacks for her room and when it came time to check out, my brother and I always give to the food bank because they were there to help us when we were struggling right after Daddy died.

When I explained what we were doing and that it would be an additional 7 dollars added to our bill she looked dubious until she realized that the cashier wasn't actually going to take some of our groceries, but already had a bag for food put aside for donation. She sat in her wheelchair and clapped like she had just won a game or something.

When we got her some, we brought her back to her room and made sure she had her snacks. We left her to put them in the containers like she wanted while I went downstairs to put away the massive amount of groceries and then make sure we had enough in the bank to cover what we spent.

Great news. She wants to do it again. We have it scheduled for the 12th of February. Cross your fingers and wish us luck.

This is such a great post. What a great achievement for your mother. It must have taken a lot of courage for her to say she wanted to go with you and to actually see it through and enjoy it is such a great thing. Even greater is the fact that she wants to do it again. This was such a big step for her.

That is really good that she wanted to go out and that she is saying that she wants to do so again. Hopefully, she won't back out of the next trip and that this will be the beginning of her expanding her world.

That is such a positive story, I'm glad you shared it with us. I'm so pleased for all of you that the trip went well.

That sounds like great progress! I'm glad she enjoyed the outing enough that she wants to repeat it!