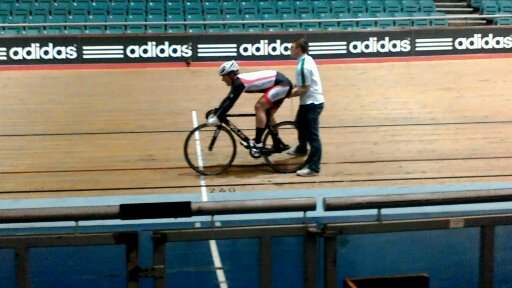 After a few tasks I needed to do during the morning and early afternoon, I went to the second annual Manchester Beer And Cider Festival at The Velodrome Cycling centre, which I helped promote through my radio show, especially as the station is among the event’s sponsors.

Access has been greatly improved since the 2014 event and there are beers upstairs as well as down in the lower section, though it still meant lots of yo-yoing up and down stairways with just one direct route available between the decks, and toilets only upstairs.

Beer wise, the choice was enormous. I had half pint glasses of each of the following ten ales.

A slightly smoky strong porter with streaks of caramel and liquorice. 4/5.

My favourite beer of the ten tried. A pale ale brewed specially for the festival. Lovely smooth golden finish with a subtle citrus taste, and combination of different exotic hops. Excellent. 5/5

A less exciting pale ale, possibly suffers from drinking right after one that is so perfect. Monkey Puzzle is perfectly drinkable but rather anti-climactic. 3/5

Tastes like a light chocolate milk shake rather than a beer; nice but eccentric. 4/5

Even more eccentric – a beer brewed with rhubarb – so much that it tasted like liquidized concentrated rhubarb juice. 3/5

Copper coloured, strong aroma, modest hoppiness- not in keeping with the excitement of space adventure promised but a decent light ale anyway. 3/5.

Much like Sonnet 43, but this tastes alcoholic with little taste explosions of vanilla as you drink it – terrific. 5/5.

An interesting experimental beer in the true Schrodinger tradition – a light ale designed to capture the flavour of a stronger beer. It works. Maybe in a parallel universe it fails. 5/5

I saved two really strong ales for last. The first being this Chilli beer that doesn’t over-power with its chillies or the plums either. 5/5 Tremendous.

I ended the night with a beer of real bite, citrusy, spicy and strong – a great end to a great first day at the beer festival I hope to revisit on Friday. 5/5

Image Credit » Photo A Manchester Velodrome cyclist gets ready to ride the circuit, taken by me from the beer arena.

That is assuming that you have recovered by Friday.

After the first two my tongue would probably be numb and no good for tasting anymore! Or I'd be asleep!

I very rarely drink alcohol these days, and if I do I like a glass of red wine with a lemonade top.

I am so jealous I can hardly post!! I have developed a sensitivity to all alcohol, and I can no longer sample anything. It really affects my ability to write about brew pubs etc. :)

Many details I couldn't relate. But sounds like a fun beer event.