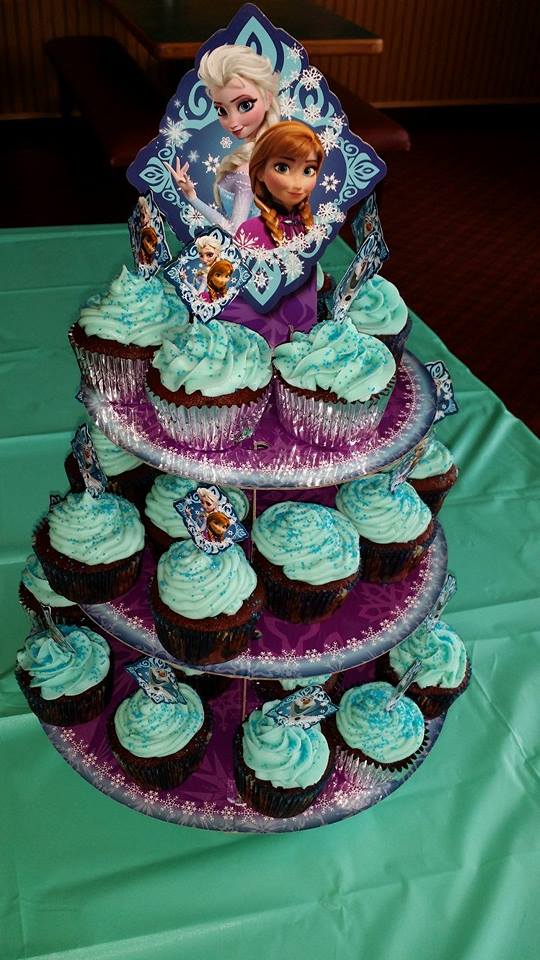 This past weekend we celebrated my daughter's ninth birthday. Now her birthday is on New Year's Eve, so we pushed the party off a few weeks to get past the holiday season. This is the first year we've done that and it worked out perfectly. We are lucky enough to live very close to an indoor ice rink. My daughter has developed a love for ice skating and she wanted to have her party there.

After all was said and done, we chose to have the main party at a local pizza place and then take everyone over to the rink to skate. This way, anyone who wanted to celebrate her birthday with us but not go skating was able to do so. It may be a bit cliche' but my daughter chose "Frozen" as her theme. Oh boy, there goes the party budget because of a Disney theme. Not so!

A week before the party, we made up a practice batch of cupcakes. I haven't served cupcakes (or cake) in years because I could never frost them "just right". Money constraints being what they were, I needed to find a solution. Piping...that was the solution. In today's confection-trend, most cupcakes are now frosted via piping. I could do this and I did.

We played with food coloring and got the color to the exact shade we were going for. It matched the theme colors spot on. I did buy several piping tips, piping bags and I set to practicing. Granted, I know there has to be an easier piping method but I survived piping all 36 cupcakes. They may not have been 100% bakery-quality piping, but they were at least 90%. Top them with blue sprinkles and stick a few Elsa/Anna toothpick flags in them and voila!

In addition to making our own cupcakes, we make Olaf favor-cups and glitter crayons. We used several coupons at Michael's to get the items we needed at a discount. All in all, we did a great job not spending a fortune on a Disney-themed party. I love the memories my daughter and I created together and she has a blast with all her friends.

Back to basics, keeping it simple and staying on budget.

thta is one beautiful birthday cake with cupcakes, i bet she is happy

Thank you. Yes, she was very happy and had a great time.