Making A Squirrel a Pet 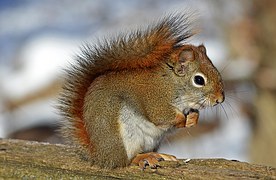 People in the south know, if you find a baby squirrel before it's eyes are open, you can dropper feed it and it will thrive and become a pet. I have known people who have done this and it is NOT a good idea. Yes they are cute and sweet and it is fun to watch them run around, but it does something to them. They do not understand their natural enemies. Usually the squirrel will end up being killed by a dog or something because it will not know to flee.

Coyotes are getting pretty populated here now, and people have begun saying the same holds true for them. I can only say, in MY experience that is not true. When we were first married my husband found some new born pups deserted in a drain. He watched for a couple of days and the pups were not being cared for by the mother. He thought they were German Shepard s. He brought them home and we began caring for them. One died any way but the other lived. We fed him and kept him warm and treated him like a puppy. As soon as he was able to get around he became MEAN! He would bite and attack. He would tear up everything. We finally took him to the vet and the vet said he was a coyote and told us where to take him. I do not think that pup would have ever been domesticated.

I Have COMPLETED Candy Crush!

I once found a baby squirrel abandoned and tried to raise it, but it died after 10 days, it was so sad.

Here in my part of the UK, red squirrels are protected. We are lucky enough to have some who visit our garden.

my goodness we have a LOT of squirrels. They will eat the wiring in the car and attic but they are cute!

Squirrels are cute but definitely best left alone in the wild

I love it! A coyote. Really! Loads of laughs on that one. Certainly an experience worth relating again and again.

It is sad that we humans feel the need to dominate or tame all animals. In the end we only hurt a wild animal by treating it as a pet. We are literally stealing its destiny.