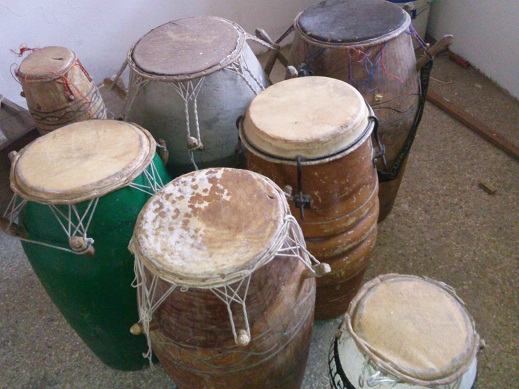 One of the continents with rich cultures is Africa and one of the leading countries in this respect is Ghana. Drums ever since the days of Adam have played important roles in the lives of Ghanaians. It is an aspect of our culture that continually get displayed during varied occasions including worship, funerals, festivals, naming ceremonies and the like. Drums are of different sizes and the hollow nature of the drum plays an important role in the sound it provides. African drums are carved from wood stumps and stems. Animal skin is used to make the drums. Both the wooden part and the skin covered faces of African drums are played to make music

In the olden days, history tells us that drums were used in transmitting very important messages when someone is dead or when there is war or a raid by slave raiders. The music sends coded message to the inhabitants who are in their farms not to return but hide from the raiders.
One very important drum in Ghana’s culture and national life is the talking drum. These are two drums, the male and the female. The male drum has a deep voice while the female has a small voice. The combination of the sounds or beats from the two drums is used to sing appellations to leaders like chiefs, political leaders and to praise great sons and daughter of the land. They are played with two special sticks that look like the number 7. The master drummer is the only one qualified to play this pair of drums after several years of training.
They are plaid on only special occasions only due to their important role in our culture as a people.

AFRICA AND WARS MUST MOVE IN SEPARATE WAYS NOW!!!