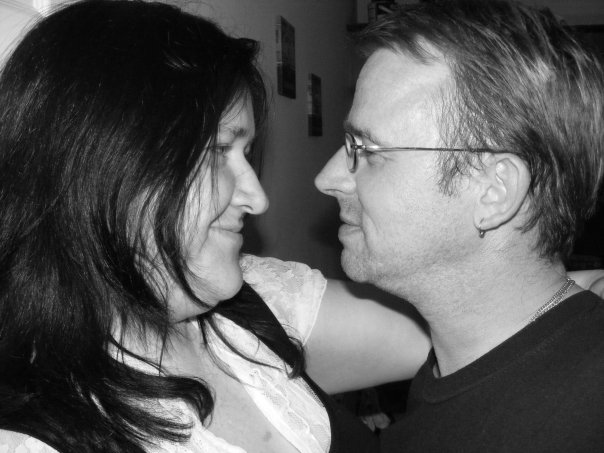 Today marks the seventh anniversary of my wife and I first meeting in person. I was living on the other side of the country at the time. we met online through a Facebook game and had got to know each other quite well over the course of a couple of months. We chatted on FB and within the game as well as spending a lot of our free time on the phone to each other.

I had originally planned to visit her on New Years Eve 2007 into 2008 as my daughter from my ex-wife stayed with her whilst I gave my boys (again from ex wife) a lift to where they supposedly had tickets to an "all-nighter" Bullet for My Valentine gig in Nottingham. Plan was to drop them off there and for me to continue to where we live now to spend some time with her. Those plans got scuppered though as when they went into the gig the doorman mentioned they should leave at midnight as the "all-night" part of the gig was for 18+ only. They went in anyway and I phoned my new love to let her know and we pretty much spent the next two hors on the phone, her in the comfort of her home, me in a bus shelter near Rock City, Nottingham.

We decided to then meet up the next weekend. I arranged with a work colleague to take a laptop from work with me so I could "work from home" on the Monday and after spending time with my kids I would drop them back home and head over the 135 miles to see My Love.

I had been stopping occasionally in lay-bys along the route to let her know my progress and when I reached the motorway exit gave her a ring that I now needed directions - Satnavs were a new-ish thing then and I didn't have one, as I hadn't needed one. We met in the car park of a Co-Op on the main route into town. I had been smoking quite a few cigarettes on the drive as I was a little nervous at the exciting prospect of finally meeting someone I had really made a connection with, so had been chewing mint gum since 10 miles out.

That first kiss! WOW! Electric! And it confirmed to me the gut feeling I had had for the last few weeks. This just felt so right! I KNEW this was the person I wanted to spend the rest of my days with. Today is the seven year anniversary of that day, so we have spent some "us" time together with a meal at our local pub-restaurant. I had a little surprise up my sleeve though. Whilst it had been her idea to go for a meal, whilst nipping to the Sainsbury's 100 yards further up the road to get something my step-daughter could make herself for tea, I bought some flowers and a card. Wrote the card in Sainsbury's and left them both in the pub with the staff with the request to bring them out with our food. I't the little things... ;)

Our love for each other is as strong today as it was back then when we first met - probably even stronger despite the fact a few people have tried in vain to tear us apart - this has only made us stronger and moreawesome !