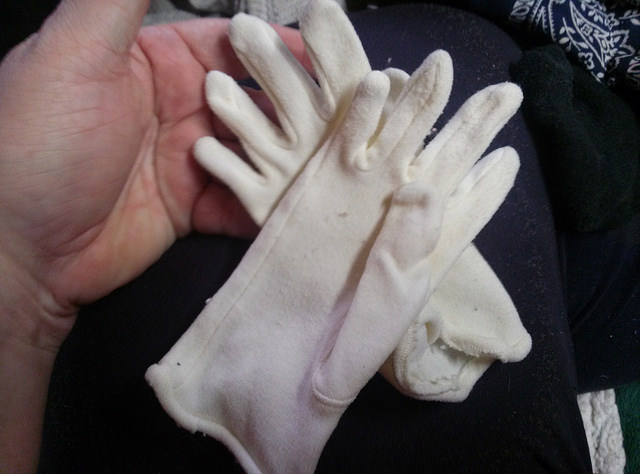 I am a pack rat from birth. I say it is genetic since my one grandmother saved and stashed just about everything, tho not quite to the level of a hoarder in that the main living areas were relatively clear. The basement on the other hand..... Things did eventually leave the house, tho not very rapidly, just enough to keep the level down.

I am almost as bad, though I have been slowly trying to break the habit. I do it slowly, I've had over 50 years of collecting things, it will take a while to get rid of it.

I have been doing pretty well tho. In the last year I have managed to jettison quite a bit of stuff throughout the house. I even managed to get my underwear drawer cleaned out and organized (I had bras in there I haven't been able to fit into in 25 years :P ).

There are a few things I will hang on to tho, simply for the connections to my past. The gloves in the picture for example. My mom had found them when she was clearing things out. I wore these at Easter while we lived in Hawaii in 1963. I still can't believe I was that small LOL!

I have thrown a lot of things out the past few years also. But some things will never go. Too many memories attached

One way you can work on getting rid of stuff you don't need (that have no sentimental value) is to donate it to a local charity who holds sales to raise money. It may help by making you feel like you're doing something good to help others! :)

I do, I have found keeping a box near the front door designated for the Hope Center is a good thing. Still hard to put things in, but once I do, they stay there.

That's really awesome! :) Being co-director of a charity, I really appreciate when people help out!

Well that socked me backed to the days my mother and aunts wore gloves and hats whenever they went out!