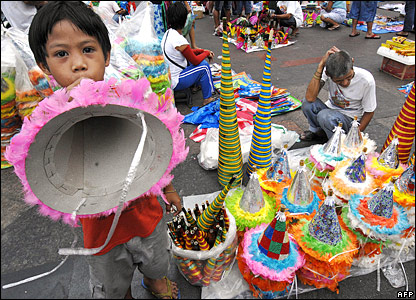 The Christmas Season in the Philippines is probably the most enjoyable holiday season in the country. People are busy buying gifts, decorating their homes, and cooking food in preparation for the Christmas Eve and the New Year's Eve. Being a Filipino myself, I always look forward for the different festivities that occur during Christmas because they're usually family oriented and great relievers of stress that my body and mind accumulated throughout the year. And after 20 years of being able to observe on how we celebrate Christmas and New Year, I learned a few things that distinguish the Filipino Christmas from the rest of the world.

1. Filipinos always follow tradition. From the 16th of December all the way up to Christmas Day, Filipinos celebrate their annual Night Mass which is also known as the Simbang Gabi in Filipino tongue. Simbang Gabi is a series of masses that's occur at times ranging from 3:00 to 5:00 in the morning. You can always expect that despite the early schedule of these masses, the churches all over the country will always be full of mass-goers who are eager to finish the nine-day tradition because it is believed that if one is able to complete the Simbang Gabi, then he will be granted whatever he wishes for during the last day.

2. No matter what status they're in, Filipinos always celebrate the Christmas Season. Some of my countrymen recently got their homes decimated by the recent typhoons that hit the country. The devastation of Typhoon Yolanda (2013) is still in full effect in Samar and Leyte, and the entire Bicol region. Another storm named Typhoon Seniang hit the Philippines last December 31 which also caused extreme destruction in some parts of the Visayas Region especially at Hinatuan City. However, despite the fact that they're still recovering from the recent tragedies, Filipinos still managed to celebrate Christmas and New Year with big smiles on their faces. This proves that no matter how hard life throws its problems at us, we will never allow it to prevent us from being happy. That's because we're a very tough breed.

3. The Lord will always be at the center of every Filipino activity. We Filipinos always go to mass during the 25th of December and the 1st of January. For us, these days are days of obligation. These two days also give us the chance to thank Him for the blessings that He showered upon us throughout the year. And also the problems that he gave us so we could become an even better version of ourselves. Problems are only temporary while the experience that we learned from overcoming those problems are permanent. And that's what makes it all worth it.

4. Filipinos will go to great lengths just to be with their love ones during Christmas and New Year. We all know it. Christmas Season is among the worst time to travel because of the sheer amount of people who go on vacations during the holidays. That's why some opt to just stay at their apartments or their houses in order to stay away from the hassle of the Christmas rush. This isn't the case for most Filipinos though. We are willing to stay long hours at the airport, hurt our butts sitting on our cars, and grow tired from travelling just to be with our relatives who live at the province. In addition to that, the Philippines is an archipelago which makes travelling even more tormenting, which also makes this Filipino trait even more amazing.

5. Filipinos will and always be hard headed. Every New Year's Eve, the casualties from accidental firework mishaps skyrocket. Yet despite the continuous announcements from the government to stop using fireworks because of the huge amount of casualties, Filipinos always choose to buy and light their own fireworks from their homes. That's why a lot of kids blow up their arms and end up with missing fingers or a missing arm at the end of the year. Its really sad that a child has to grow up without an arm or fingers just because of the ignorance of the adults around them. And if the government doesn't implement their laws properly, then this negative trait of Filipinos will continuously hurt the potential of this country in years to come.

6. Filipinos are very superstitious. From buying round fruits, to wearing shirts that has polka dots on them, to throwing coins around the house during the New Year in order to be blessed with more money, and jumping a lot of times in order to grow taller, Filipinos just never run out of superstitions. My family also practices some of the superstitions I mentioned before and the thing that I learned about them is that it's not about whether it'll come true or not. It's about believing and remaining optimistic. I guess what separates Filipinos from other nationalities is our optimism and our ability to believe in positive things no matter what challenge lies ahead.

7. The amount of food will never be an issue for Filipinos. Be it a single menu of homemade spaghetti or a buffet with centered with a one whole roasted pig, Filipinos would munch on their holiday servings with a big smile on their faces. As long as the family's well, happy, and laughing around the table then the food will always be enough.

8. Filipinos will always end the year with a BANG! Every Filipino waits eagerly for the new year ahead of them and they will always treasure the memories and the experience of the past year. The problems and the sufferings will eventually be forgotten but the lessons will always be remembered. Optimism and positivity engulfs each and every Filipino household and the entire country becomes one in welcoming the year ahead. Hoping for a great year to come...