The Richest Man in Babylon - review 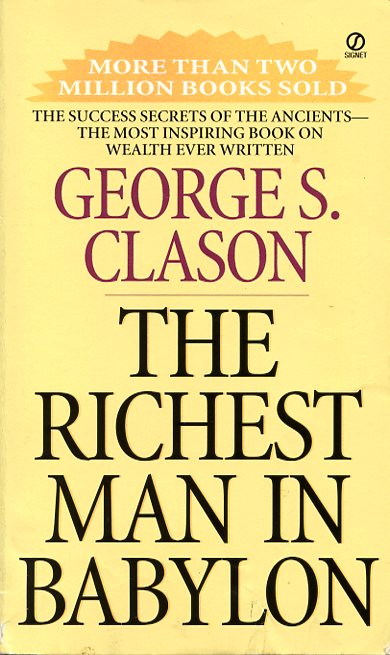 Book - The Richest Man in Babylon

The Richest Man in Babylon

I had heard of the book - The Richest Man in Babylon before but had never been interested in reading it because I assumed it would be of no interest to me and that it was "just a book". How wrong could I have been? Someone had brought the book to our house and left it lying around. As an avid reader, I am likely to at least pick up and glance at anything that has words written on it eventually, and so it happened with this book. It is a small book, with no pictures and the cover is just words, so it could get overlooked. But once I opened the book and read the first few words, I was hooked and realised why it is termed "a classic". The book is a series of lessons from "The Richest Man in Babylon" on how to get rich. And he is totally ethical about it!

The book was written by George S. Clason and published in 1926. The text is about people living in the ancient city state of Babylon, scribes, camel tenders, bakers, merchants and slaves.

So, how can a book written in the 1920s be relevant to today's financial messes? Is it relevant to people with very little money, as well as those with lots? The answer to that is a big resounding YES!

The book is written in the "story" mode. That is, it tells stories about a man who lived in Babylon a long time ago. Babylon was a rich city state and the stories are mainly centred around the richest man in that city and how he gained his wealth and how he passed on his knowledge about getting rich to poor people living there. Because it is written in the story mode, the book is engaging and the points made are simple. BUT their very strength lies in their simplicity.

Are you in Debt?

Read this book. The lessons from Arkad will help you get out of debt. They may be written about a time 5,000 years ago but what was true then, is true now and the lesson is put across very easily, with examples to show exactly what it means, because even with a simple message, it can get misunderstood. The stories will engage you and show how even a slave could amass money and buy his freedom (that was possible in that time).

Have you enough money to live on?

Many of us feel as if we never have enough, there are always so many calls on the money we have and it can seem as though it is not enough to meet our needs. Read this book. Arkad and the other characters in the book are in exactly the same situation.

The very first rule in this book, is to "Pay Yourself First". The stories around this explain exactly what this means and give concrete examples. Arkad, the hero of the book (and the richest man in Babylon) explains how he, as a poor scribe first learns about this rule, how he made mistakes and how he moved from being a poor man to a rich one, using this first rule. Later in the book, when he is explaining his methods to other hard working but poor men, he asks the egg seller a question. "If each day, you put 10 eggs in a basket and each evening remove 9 of them, what will happen?" The man correctly identifies that eventually, the basket will be overflowing with eggs. Arkad suggests that each person should pay themselves one tenth of their income. This sounds like tithing but it's NOT. Tithing is giving AWAY one tenth of your income. This rule is to pay yourself one tenth.

I am not explaining any more about this book, except to say it was a VERY good use of my time reading, it. It was interesting and provided me with lots of good ideas about having enough money. You can buy the book The Richest Man in Babylon

here. PLEASE NOTE: this affiliate link is for PersonaPaper and has been provided by the mods.

Battle of Wills - BOTH won!

An ethical rich person? Now that makes a change! :)

this makes so much sense, I love the argument he brings out

The danger in links is that it is easy to wander away and forget to say how interesting book this sounds..

The whole book, from cover-to-cover, takes maybe two hours to read, if you factor in for a couple short distractions.

You miss out an important lesson in investing. That is to trust only in experts in the subject matter.

I don't want to give away ALL the information in the book. But you're right, there are some very good, interesting and thought-provoking stories on that point. The brick maker and the Phoenicians comes to mind.

yes my friend we should have to read a book before commented on it.same is true for every decisions

It's called a "journal"! I know people who post occasional "essays" on their Facebook page for friends to read. One writes on their travel adventures, the other writes about local events. Both are funny. I helped one of them create their own blog with these posts, so they would have a wider audience and now the blog is getting a few hundred views a month. It could be monetised, if they would just apply for adsense (I have suggested it) and they could get an income!

I have read some of your posts and I think you are far advanced in getting others to benefit from their writings.

Yes I've heard of this book also. Very good review! I do so love it when people leave books lying around my house. :)