Altered Landscapes: A Lesson in Geology 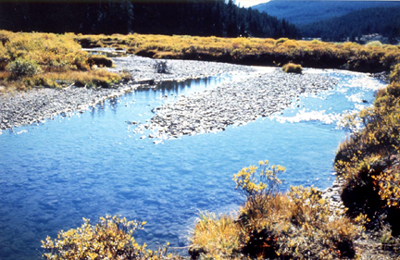 Landscapes are altered on a continuous basis around the globe, in every continent and every climate region. Most erosional processes are simply a component of nature, yet their impact can affect all forms of life, from humans to animals to plants. Whether these landscape changes are the result of degradation or aggradation depends on many environmental factors, from location (latitude and longitude) and the climate (weathering) of the region, to the hydrological processes of rivers, oceans, ice, and vegetation, as well as from human land-use influence. Both determinism and possibilism directly impact the landscape.

Aggradation is the gradual increase in land elevation due to deposition of sediments, including rocks, silt and sand, also called “alluvium”. Degradation is the opposite, the decrease of elevation due to the removal of sediment, and is more widespread than aggradation. Although these can both be natural processes, they each can drastically alter the landscape, and in some cases, human intervention is necessary to maintain and preserve their local environments.

As well, humans have purposely altered the landscape in many ways, from levees to dams, agriculture, air pollution, roads, buildings, tunnels, artificial lakes, and much, much more. According to one study, “More than 75% of Earth’s ice-free land shows evidence of alteration as a result of human residence and land use” (Ellis & Ramankutty, 2008).

Fluvial processes, those involving moisture, are the major natural causes of landscape alteration, followed by Aeolian (wind) processes. Erosion by weathering involves temperature and moisture, and, as well, is dependent on the morphology and elevation of an area.

An example of current fluvial aggradation is at Mount Rainier National Park, where researchers have discovered that the glacial riverbeds are filling with rock at the rate of 3 feet per decade (National Park Service). This happens because the snow and ice in the higher regions of the park has packed down, and the density and weight causes the ice to slide downhill due to gravity, taking rocks with it along the way. Aggradation in a river can often cause a river to alter its course, and within this park, humans have been forced to build dikes and levees to prevent damages to roads and buildings.

Desert areas are typically hot and arid or semi-arid, and the sands and fine dirt are transported and deposited elsewhere due to the force of wind, called the aelion process. Desert pavement is the result of erosion and the decrease in elevation due to wind. Likewise, sand dunes, are elevated (aggradated) formations of sand, due to blockages of the wind.

In desert areas around and near the equator, where there is very little rainfall, the landscape is altered mainly by wind. In contrast, in desert areas in latitudinal zones much further north or south of the equator, which receive greater moisture content (such as the monsoons in the Sonora Desert), fluvial processes are the major reason for desert erosion, especially in the higher elevations. Another reason for degradation in arid and semi-arid locations is human activity, with much of it being agriculturally-induced.

Hurricane activity, upon reaching land from the oceans, can alter the landscapes, both with the massive winds and the tidal activity. Examples are Hurricane Georges in 2008, a Cat 2 hurricane which caused land degradation, yet Hurricane Camille caused aggradation of its backshore in several locations by 20-90cm (E. Otvos, 2004). Hurricane Katrina caused flooding and the breaking of both natural and man-made levees, leaving mud and debris from the Gulf in its wake.

Precipitation can cause degradation on bare soil from the force of the raindrops, or from the weight of ice, and can cause displacement on slopes, transporting sediments downslope. There is unusually high aggradation in some arroyos, researchers have found, such as the Chaco Arroyo in the southwest, due to “exceptionally high sediment loads due to climate change” (Aby, Gellis, Pavich, 2013)

In high latitudes and altitudes, areas affected by permafrost, (which are approximately 13% of the world’s soils and 25% of the total land surface (Humlun, Melnikov, Rasch, Romanovskii 2004)), again both aggradation and degradation can occur and both have substantial effects on the landscape. Frozen ground can form cracks by expansion, and melting causes transportation of both moisture and sediment, by creeping as well as with landslide activity.

As another example of human-intervention in landscape alteration, several dams have been built on the upper Missouri River. These dams intercept the natural sediment transportation. “Changes in hydrologic conditions and channel morphology downstream from the dams have impacted channel stability. Impacts have included streambed degradation of up to 3.6 m and substantially altered magnitude, frequency, and temporal distribution of flows.”( Mellema, W.J., and Wei, T.C. (1986).

Glaciers are the main source of fresh water in Central Asia. Humans have depended on it for hundreds of years. However, due to climatic changes, research has shown that the glaciers have been shrinking. “Averaged degradation rates have varied between 30 and 35 percent in the last century and between 20 and 30 percent in the last 50 years.” (Chatenoux, B., et al., 2009 ) Water run-off will be affected, and the impact on the human population will surely be felt as the glaciers continue to retreat.

One other example of how aggradation can occur: As tectonic plates under the oceans move, the oceanic crust can push underneath the continental crust (subduction). Once inside the mantle, the crust melts into magma, which reappears at the surface as an isolated volcano or a mid-ocean ridge.

In summary, which alters the landscape more is a question I don’t believe can be answered with a general “catch-all” answer, as I believe the answer is dependent upon all of the circumstances mentioned throughout this paper, and is different among various geographical locations.

However, environmentally-induced aggradation and degradation generally produce gradual alterations, with the exception of sudden climatic forces, such as flooding and hurricanes, etc.. Degradation likely alters the landscapes the greatest, with the added human-induced modifications.

Interesting. I always enjoyed learning about glaciers and the ice age and ox bow lakes and the like in Geography in school. Tectonic plates were never covered in school but they are really interesting too.

Did the Earth move for you, MegL ?...lol

Death and change, guaranteed these two are.

geological survey say that some time the disk and plates under the crust of earth moves and it bring a lot of destruction on the earth.

Geography is truly fascinating and I do hope you return here to write more and interact with the many posts here.