DorothyGale has never seen a germ! (A little humor) 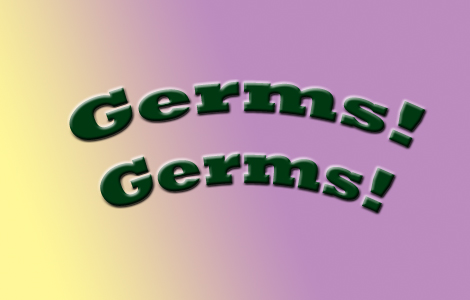 DorothyGale has been thinking about germs lately. She's not sure she really believes in the germ theory, since she has never seen a germ. It's for this very same reason that DorothyGale does not believe in the Great Turkey, who supposedly brings pumpkin pies to all good women on Thanksgiving. She has never seen the Great Turkey and is certain the pumpkin pies are delivered by a bakery.

Despite her lack of belief in germs, however, DorothyGale (a woman of class and distinction, but not necessarily a genius in everyday life) yes, DorothyGale has come come up with a few ways to keep a kitchen sponge germ free.

1. Remove all moisture: DorothyGale believes that if you remove all moisture from a sponge, it will remove germs. If they existed. Which they don't. For that reason, she suggests you throw it in a fireplace or woodburning stove for a few hours. At the end of that time, the germs will be gone. What's that you say? The sponge will be gone, too? Well, who would be stupid enough to steal a sponge from a fireplace?

2. Wash it: Throw the kitchen sponge in the washing machine. And good heavens! DorothyGale insists that you should not throw it in with your underwear.

3. Zap it. DorothyGale is pretty certain this might work to kill germs. Just zap it in the microwave for an hour or two. Or ten. What's that? Zapping it that long will start a fire? Well, it doesn't really matter, because DorothyGale does not believe that micro waves exist, either.

In the end, DorothyGale feels that if you believe in germs, it would be so much easier to go out and buy a new sponge rather than cleaning it. And if you don't have time to run out and get one, you could always have it delivered by the Great Turkey.

Please do not violate copyright -- obtain permission before using any image or text.

Tis the Night of the Ghosties

Over the river and through the woods ... or at least just down the street!

This is Guiness the Cat. This all makes purrfect sense to me, Dorothy Gale, and I'm a very logical cat. I've never seen a germ, either.

I think my husband doesn't believe in germs, either, because he keeps the kitchen sponge in deplorable condition. I, for one, am more of a fan of the Great Dishwasher.

I'm sure the Great Turkey doesn't have time to deliver sponges this time of year.