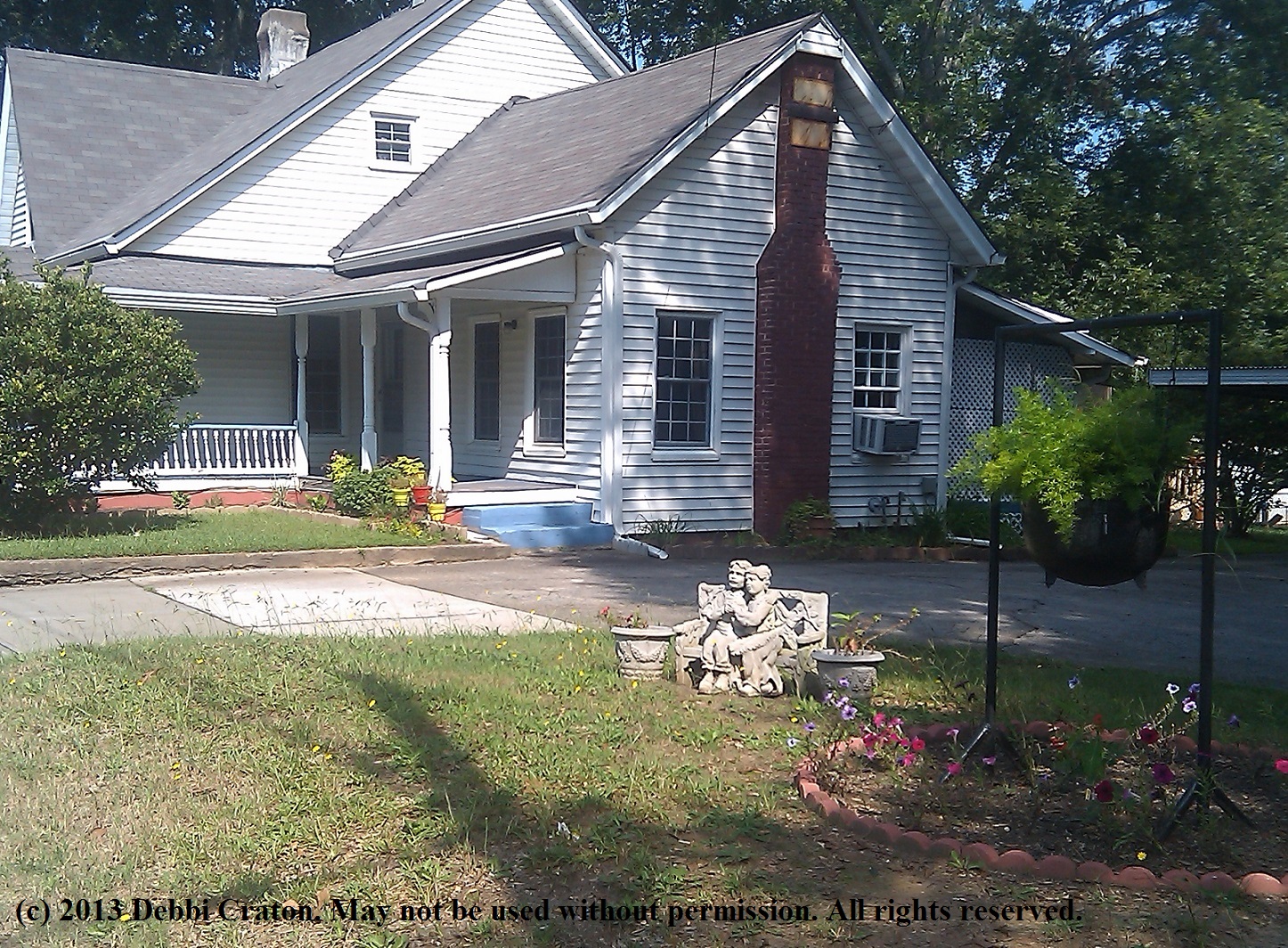 It's amazing the little things you pass by a million times and never see.

Awhile back, I was playing tourist in my hometown taking pictures for a blog post. The wonderful thing about planning blog posts is that they can focus your attention on things right in front of you that you wouldn't otherwise notice.

Presenting my hometown as a worthy attraction for a tourist required actually being a tourist. So I went to the museum four miles away that I've been meaning to stop at for years, picked up a walking tour brochure, and actually walked from one end of the historic section of downtown to the other, and back. With a camera (actually my phone). And took pictures.

Well, almost. If I had been doing it like a tourist, I would have used the real camera.

Using my phone instead of the camera meant I really couldn't see what I was taking pictures of with the glare of the sun on the screen. And I did feel a little silly out on the sidewalk taking pictures in my hometown where anybody who knew me could drive by and think, "What is that idiot doing?" I kept expecting someone to stop and ask if I'd had car trouble. Why else would I be walking down the sidewalk? If I had driven somewhere 500 miles away, I wouldn't have felt so much like an intruder, taking pictures of people's houses. I would have felt like a real tourist.

I said all that to say this. Because of the glare on the screen and my rush not to be seen by people I knew, I really didn't know what I had taken pictures of until I uploaded them onto my computer. I was just snapping away, hoping at least half of them turned out presentable. 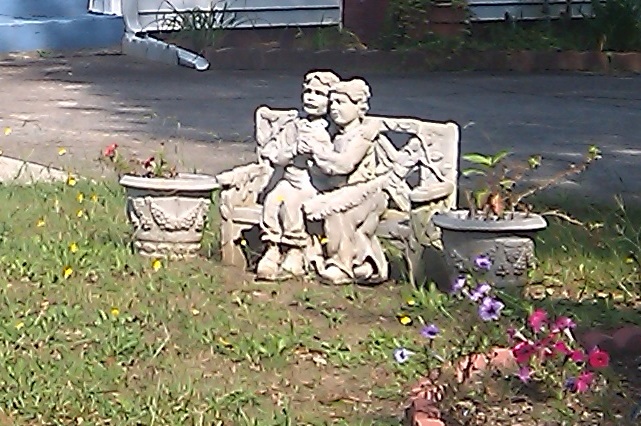 One particular building that I wanted pictures of was an old house built around the time of the Civil War that my parents had rented rooms in when they got married. Uploading the photo onto my computer and really looking at the shot of the side of the house that best showed those two rooms, I realized that, situated right in the middle of the frame in front of my parents' honeymoon suite, was a little statue of two lovers--the best I could tell a little old man and a little old woman--sitting cuddled up on a bench, his arm around her, holding hands.

The symbolism was so fitting. My father came home from Stalag 17-B in 1945, married my mother after a quick courtship, and moved into a couple of rented rooms in an old house until he could buy land, cut down trees, have them milled, and build her a home of their own. 63 years later, he died two months before their anniversary, and she died two months after. Except for the times his service in the Air Force took him away, they went everywhere and did everything together.

There's no telling how many hundreds of times I have driven past this little perfect symbol of their marriage, and yet I never saw it until I uploaded a picture I never even saw while I was taking it.

From now on, I'm looking.

Adapted from an article formerly published on Bubblews.

Photo and content (c) 2013 by Debbi Craton. May not be used without permission. All rights reserved.

Image Credit » Photo (c) 2013 by Debbi Craton. May not be used without permission. All rights reserved.

Sneak a Peak at the 2015 Chick-fil-A Calendar

It is a cute statue. I walk around everywhere with my camera. My husband says I look like a tourist all the time.

I know what you mean about some situations where you think you stand out like a sore thumb. Back in the 70s/80s whenever I was out someplace with a camera, zoo, park, beach etc I always looked for toddlers to photograph, because they are cute and usually doing something stupid, and the parents would beam with pride...nowadays parents would think you're a pedo and probably beat you up...lol Times change..

That is such a sweet statue. My friend and I saw a similar one for sale at a shop we visited while on vacation. We kept looking at it and thinking if only we had a big enough yard, we would love to put something like that in it.

That is a beautiful story of your parents. And that is a cute statue.

It doesn't seem weird when you're away from home.

It's always the cheaters who spoil things for everybody.

It fits their story perfectly.

My parents had the perfect love story.

I've had that same experience wandering around my neighborhood and my town. It can even be dangerous, since you can be mistaken for a burglar or a terrorist if people see you taking photos of their houses or yards. I'm always snapping photos of flowers and trees. garden decorations and statues, and holiday decorations, flags, and banners people have on or near their homes. Suspicious neighbors I don't know from a few blocks away have seen me photographing a nearby yard and asked me what I've been up to. I tell them I'm an amateur nature blogger.

It is amazing the things that we miss in our daily hurried lives. I know that there is plenty of photo opportunities near us that we miss each day. I live near a tourist town and many come here to see the brilliant leaves in the fall, but for us they are just a sign of winter nearing.

I would certainly be suspicious (not to mention angry) if someone was taking pictures of my house. But then I don't live in a historic house on the main street downtown, and my house isn't on the official walking tour. I don't know that anyone other than me has ever actually done the official walking tour, but theoretically there should be some pedestrian traffic from the walking trail accessing restaurants and stores by way of downtown.

It was amazing all the details I noticed looking at those photos that I'd never noticed before.

That is a wonderful story Debbi. I know what you mean about not being able to see things on the screen...even on my digital camera screen...when the sun is shining brightly. I often take multiple photos also hoping that one or more will turn out under those circumstances.

That's the great thing about digital. You are only limited by the size of your card. Taking dozens of shots hoping to get one good one is not an issue.