A few weeks ago, I traveled to Sweden with a few friends during my Fall vacation. The three things I learned while I was in Sweden were this:

1) Bikes. Bikes, everywhere. There's even a separate strip on the road for bicyclers to ride on.

2) Yes, the Swedish speak English, but all advertisements, signs, and labels are in Swedish, because...it's Sweden. Obviously everything is going to be labeled in its native language. I went to a grocery store myself, hoping to buy a few things, but instead, I came out will only apple juice, bread, and butter, because I had no idea what all the food labels meant. I didn’t have a translator on me, which made the situation worse. Even buying the butter was a gamble itself because I didn't know if it was butter. I just crossed by fingers and hoped for the best.

3) The Swedish take their deserts and candies VERY seriously.

Pastry shops, bakeries, and candy shops littered the streets of Stockholm. I felt like a little kid again, twisting my head back and forth at the sight of all the different shops, advertising their pastries through their glass displays. I could go on about all the delicious pastries I saw and ate, but I'll condense this article to a minimum of three. I'll begin with my first morning in Sweden. I went into a muffin shop with my friends. I don’t remember the name of the muffin shop, but the muffins were amazing. I don’t know how else to describe them. 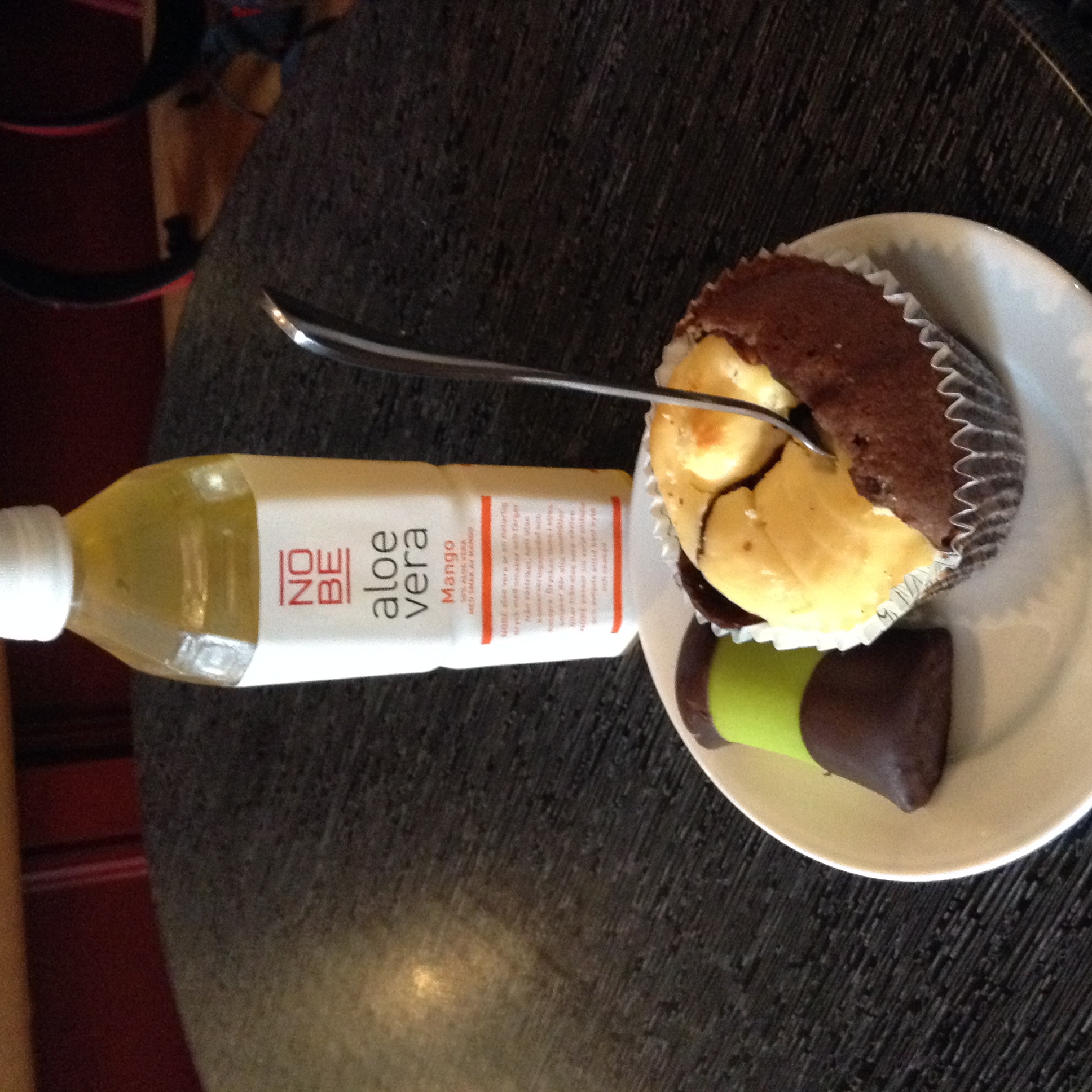 That was the second best decision of our lives. Above is a chocolate-cheesecake muffin, standing comfortably right next to a Punschrulle . A punschrulle is an interesting pastry concocted by the Swedish, made from flour, bits of cookies, butter, cacoa, and punsch liquor, giving the pastry a strong but distinct flavor. The pastry is dipped in green marzipan, and the ends of the cylinder are dipped in chocolate. The drink in the center is aloe vera…which I had no idea that you could drink. It was a bit expensive (granted, we were in Stockholm) but it was well worth it. I was in a sugar coma for the rest of the day.

No, that wasn’t the best part, though. My friends and I made the best decision of our lives by going into the Café Saturnus the following morning. If you EVER go to Stockholm, promise me that you go to that café, please? The reason being that they sell cinnamon buns the size of your face- an intoxicating 400 grams. The reason I know how big they are is because I read a view online about the café. I managed to convince my (guy) friends to go by explaining to them how big the cinnamon buns were. My female friend (the only other female who went with me to Sweden, bless her) agreed because she likes cafes. After turning onto the wrong roads and after two of my male friends tried to race each other across the street in oncoming traffic (I think they both traded their common sense to the devil in exchange for sprinting skills. I was amazed yet terrified at the same time), we made it, and within twenty minutes, we received our circular slices of heaven cinnamon buns (Called kanelbullar in Swedish.). 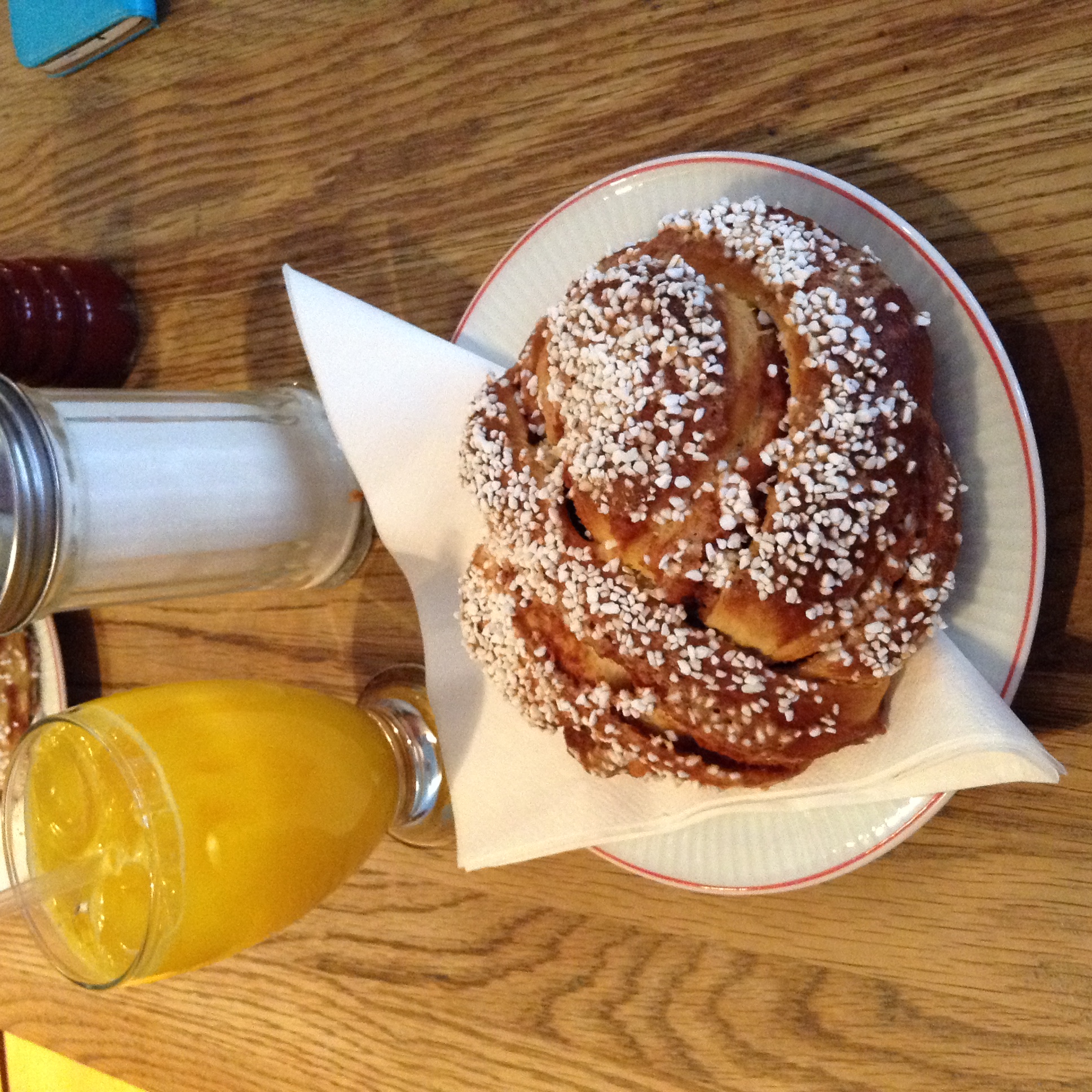 My assumption is that most of you reading this are staring blankly at the picture and asking, “But…where’s the icing? Why doesn’t it look as greasy as a cinnamon bun should? Why is there salt on it?!” First, let me explain first that, amazingly, despite Sweden having its own HOLIDAY for cinnamon buns (October 4th. I missed it by a week. By the way, the Swedes have a day of celebration for waffles, too.), Cinnabon is nonexistent in Sweden. However, Seven-Eleven stores are everywhere. I still have to figure that one out. Despite all of that, all quickly summarize that cinnamon buns in Sweden have their own different style. They are made more naturally, and topped off with pearls of sugar. Don’t fret; At first, I thought the balls of sugar sprinkled on my cinnamon bun were salt, too. It was the best cinnamon bun I had in my life. I had to split the bun with my friend because my stomach was (shockingly) not going to be able to finish a whole 400 grams of pastry. I won’t explain how wonderful it tasted so you can go to Sweden and go to the Café Saturnus for yourself.

The last pastry that is worthy of being mentioned is the Princess Cake. During my last morning in Stockholm, my friend and I quickly bought some souvenirs for back home. I made a realization.

“There’s something I didn’t try in Sweden,” I said.

“Swedish meatballs?” She asked. (That was true. Yes, I’m still ashamed about it.)

“No, the Princess Cake! Remember that thing I was talking about a few days ago with the green icing?”

“You did mention that…”

After we bought what we wanted, we went to a pastry shop. We shared a slice together. 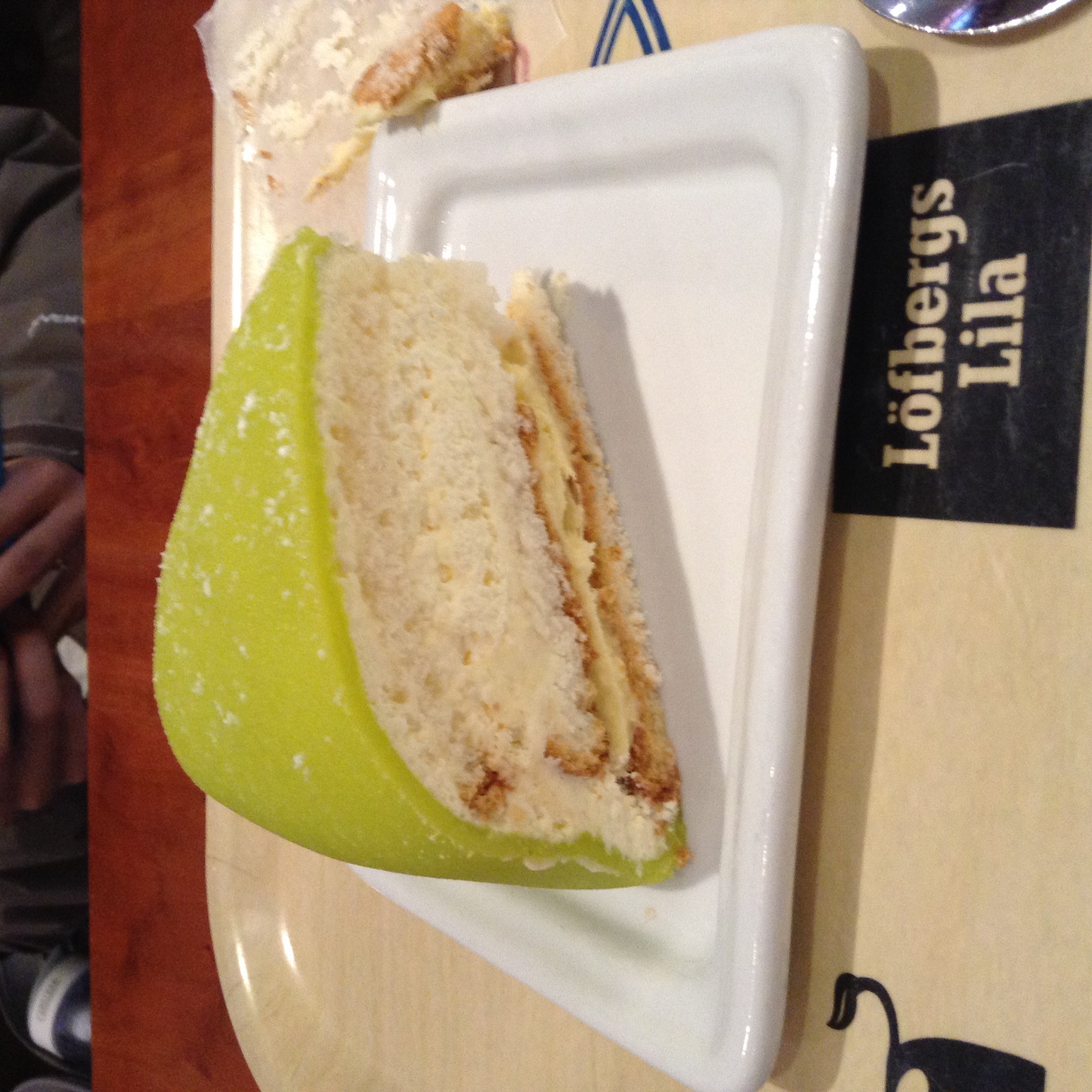 A Prinsesstårta is a vanilla cake with layers of cream and strawberry jam on the inside. Normally, Princess Cakes have strawberry jam inside the cake, yet this one didn’t. What makes the Princess Cake unique is the thin, green layer of marzipan that decorates the cake, and is usually topped off on top in the center with a pink rose and powdered sugar (The Swedish seem to have a thing for green marzipan.). Either way, it was fluffy, airy, and creamy. I enjoyed it immensely, and so did my friend.

I could have spent hours writing about the candy shops and other foods I experienced in Sweden, but I just wanted to condense it into this post. If I ever get the itch to write about Sweden and its food again, I will, but I think, if you ever have the time in your life, go to Sweden. Go, just go. It won’t just be the food that will entrance you, no, it won’t be the first thing to grab you by the hands…it’ll be the cold. It was freezing in Sweden. You’ll get off that plane and be amazed by how freakin’ cold it is and you’ll regret not bringing gloves as your fingers begin turning blue.

But please, still go. I don’t think the Scandinavians get enough credit.

And one more helpful hint: Don't try to diet while you're in Sweden. Don't even attempt it.

(Last minute note: Sorry if the pictures do not look right. They wouldn't format correctly. I also had difficulty with saving the article as a draft- it would just go straight to posting my unfinished work. Hopefully, there won't be too much trouble with posting articles in the future.)

I would have a go at that green cake looking thing with a cup of coffee.

That is nice that they have bicycle trails to ride on. More cities in America need that I think. And , the pastries look fabulous. Just the knowledge that Sweden has great pastries and sweets, makes me want to visit there.

I think I'd really enjoy the cinnamon bun. It's probably not as messy to eat as the ones with frosting. I'd take a doggy bag so I could finish it when I was hungry again.

hehehe i read wrongly as parties in sweden :D your cakes are very much tempting. would like to have it for tea time :D

I should not have read this post at this time of the day as I am famished and hungry. If only virtual pastries were eatable

Luckily I've eaten some chocolate several minutes ago otherwise I would be sprinting to the kitchen for it.