Just a Heads Up on Future Plans 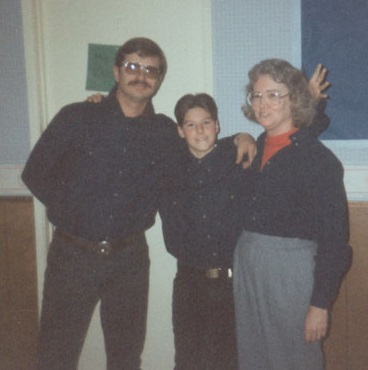 My nephew is getting married next weekend in Orange County, California. This is the nephew we fostered for a year when he was moving from twelve to thirteen and his parents were unable to care for him. So in some ways, he's a bit like a son to me, though in personality and looks he doesn't resemble Jason, whom I lost three years earlier, at all. It was a tumultuous year at times because Bobby was dealing with the separation from his parents and the life he was used to.

After all, we lived in the country and didn't have a TV. We saw that Bobby met new friends he could play with and he did get to go to youth group at church, and he got a lot of adult attention. I also home schooled him, since we were still traveling with the business and we wanted him to have a chance to see the country.

The photo was taken at church one Sunday shortly after Christmas. My husband took it, because he didn't wear his matching shirt I had bought all the “boys” for Christmas. Bobby is in the middle. On the left is Rich, and other “adopted” son who was far from his family in any way you can imagine. Rich became another significant adult to Bobby during that time. He understood better than we did some of what Bobby was experiencing.

A lot happened between the time Bobby left us to go back home and now. But he finally got his act together. He graduated from college last year and now has a good job closer to where I live than where he used to. I expect we will see the family more often now.

In any case, we have decided that we will take a three-day weekend for the wedding to participate in all the festivities. I don't plan to take my computer because I don't want to have to worry about it staying in a hot car or a motel room. I will be limited to using the motel computer or one at my brother's home. I may or may not have an opportunity to write while there. I hope by the time I leave, suffolkjason will be back to make up for my absence. I don't want you to worry about me the way we've been worrying about him. Don't worry unless you don't hear anything by the following Tuesday.

Meanwhile, if you believe in prayer, please pray that I will get well and my husband won't catch what I have. It's very mild and we aren't sure what it is, but if either of us is still sick, we will have to cancel the trip, and I don't want to do that. Meanwhile, I may be busier than usual getting ready for the trip and have less time to interact here. I do have to rest more than usual and go to bed early to stay rested. I have to work tomorrow. I still have no idea what I'm going to wear to the wedding. I expect there will be lots to write about when I get back home.

Image Credit » My husband took the photo and I have used it with his permission.

Does Your Household Give Treats to Trick or Treaters?

One Thing Persona Paper Did Right

Hope you feel better soon and the trip is a safe, happy one for all of you.

Oh my gosh, you and your husband have long been loving and giving individuals. I hope illness won't prevent the upcoming trip. No worries -- we'll hold the fort down in your absence.

Oh please take pictures to show us, I love weddings!

Take care of yourself and I hope you are able to make the trip with no events.

Thanks, Angel. I'm taking it real slow and easy today.

I'm sure you will, Feisty. I certainly hope we will both be well when it's time to go.

If I get to go, you can be sure my camera will be with me. We have the rehearsal dinner Friday night -- an event I didn't even expect we'd be invited to. The wedding is Saturday afternoon overlooking the beach.

I'll be praying for you. Get well, have a good time, and be safe.

I'm feeling better, but I'm worried about Hubby. He had to make the trip to Ventura today and he has to go again Wednesday and we leave Thursday. The trips are very had on him. I hope he doesn't make himself sick.

Wish you for a speedy recovery and the upcoming trip is safe and sound for all of you. Enjoy the moment

I was glad we didn't have to leave a day early today. That has eased some of the pressure. I'm packed except for any food we decide to take. I'm hoping we have a nice drive tomorrow and some time to relax, since we don't have to attend any events until Friday.