Collecting abundant scraps and garbages in the cities 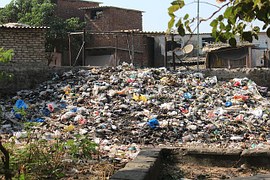 Urban India produces more than 68m tonne of generated garbage annually and out of this about 14m tonne are left to rot whereas only 27m tons of garbage gets dumped either in landfills or outside the cities. What happens to another 27 tonne of garbage, Does it is left in the cities only uncared or so.

During the year 2009, it was estimated that 498 first class cities in India generates about 38 bn litres of sewage everyday and out of which 26bn litres get disposed to the rivers and streams daily.

This is not pure and sobering statistics of data but a reality which would be faced by the people for which Indian Prime Minister has kicked off the drive on October 2, 2014.

It is a huge challenge and needs to be fought with for Clean India Movement of the Political Party inspired by Patriotism.

Rainbow in the Sky

That is a huge problem. I hope solutions are able to be found.

oh my god ! this is really something which should be taken care of that too in a very fast manner